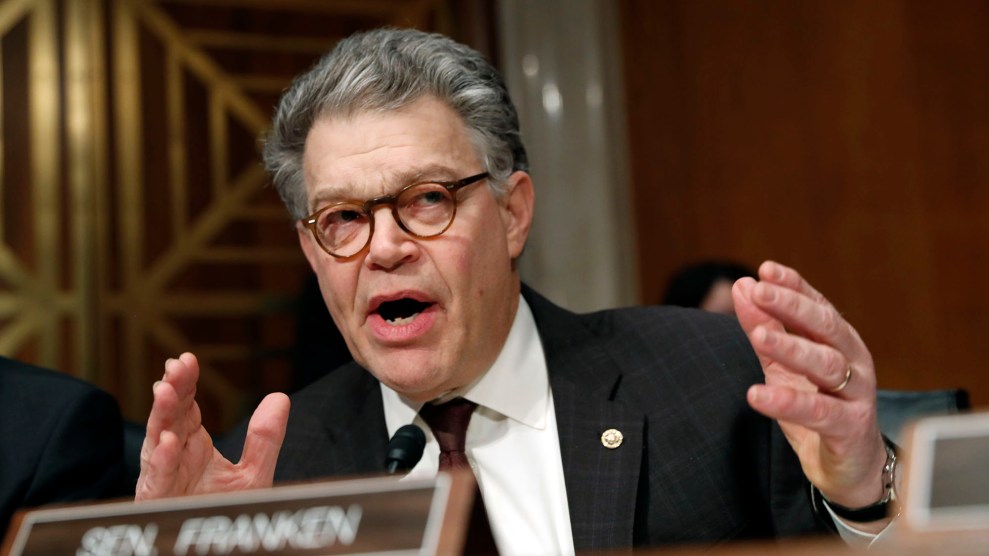 Following Attorney General Jeff Sessions’ decision to recuse himself from any investigation into Russian involvement in the presidential election, the task now falls to his deputy. Rod Rosenstein, the US attorney for Maryland, has been nominated for that job. If confirmed, he would oversee one of the most important—and politically sensitive—investigations in modern history. And Congress is using his nomination as a proxy debate for the question of whether an independent investigator should probe contacts between Donald Trump’s campaign and Russian officials.

On Tuesday, Rosenstein appeared on Capitol Hill for his confirmation hearing, which quickly became a conversation about the need for a special counsel to oversee an investigation into the Trump-Russia communications. At times, the hearing grew tense as Democrats pressed the Republican committee chairman over Sessions’ misleading testimony to the committee in January, when he falsely claimed he had not had any contact with Russian officials.

The first question out of the gate, from Senate Judiciary Committee chairman Chuck Grassley (R-Iowa), tackled this question head on. “Have you ever met with representatives of the Russian government?” he asked Rosenstein. Rosenstein could not recall such a meeting. Grassley then asked whether Rosenstein knew of any reason that he, too, would have to recuse himself from such an investigation. Rosenstein said he did not know of any.

Sen. Al Franken (D-Minn.), whose question prompted Sessions’ misleading testimony in January, posed the exact same question to Rosenstein: If there is evidence of communication between people involved in the Trump campaign and Russian officials or intermediaries, “what will you do?” Rosenstein promised an investigation.

But Rosenstein repeatedly demurred on whether he would appoint a special counsel. When pressed by Democrats on the committee, he said he did not yet have the information needed to make that decision.

Democrats on the committee repeatedly stated their preference that a special counsel oversee any investigation into Russia and the Trump campaign. Sen. Richard Blumenthal (D-Conn.) told Rosenstein that he would vote against his confirmation if he did not commit to appointing a special prosecutor. “How can you investigate your boss?” he questioned, noting that Sessions’ contacts with the Russian ambassador while an adviser to the Trump campaign could make him a witness in an investigation. Grassley dismissed calls for a special counsel as a partisan exercise because Democrats did not make the same demand of investigations into Hillary Clinton’s email server and foundation.

The hearing grew tense when Franken called for Sessions to return to the committee to clarify his testimony from eight weeks ago. “He should come back and explain himself, Mr. Chairman,” he said. “I have bent over backward not to say that he lied.” This angered Grassley, who accused Franken of being unfair to Sessions. “I consider what Sen. Franken asked Sessions…a gotcha question,” he said.

This is as angry as I’ve seen Al Franken get; calls Jeff Sessions’ response letter “insulting” — via @mitchellreports pic.twitter.com/3S8t1mirah

Democrats grilled Rosenstein on whether he could withstand political pressure. Sen. Chris Coons (D-Del.) asked whether Rosenstein would resign in protest if he believed an investigation was shut down or stonewalled for political purposes, and whether he would publicize the reason for his resignation. Rosenstein tentatively agreed that such a course could be appropriate.

A career prosecutor, Rosenstein is respected on both sides of the aisle. Though he was a member of the conservative Federalist Society while at Harvard Law School, he has served under both Democratic and Republican administrations and has maintained a reputation for being nonpartisan in his role as US attorney of Maryland and throughout his career.

Rosenstein began his career at the Justice Department in 1990, prosecuting corruption cases with the Public Integrity Section. During this time, he was tapped by Kenneth Starr to join the Whitewater investigation into President Bill Clinton and Hillary Clinton’s real estate dealings. In 1997, he became an assistant US attorney in Maryland. From 2001 to 2005, he served as a top attorney in the Justice Department’s Tax Division, until President George W. Bush made him the top federal prosecutor in Maryland in 2005. Two years later, Bush nominated him to serve on the Fourth Circuit Court of Appeals, but Maryland’s two Democratic senators blocked his confirmation, though they praised his work as a prosecutor.

When President Barack Obama took office in January 2009, he eventually replaced nearly all of Bush’s US attorney appointments. Rosenstein was one of just three who kept their jobs under Obama. “He doesn’t make any decisions that either are or appear to be political,” David Cole, who served as deputy attorney general under Obama, told The Guardian recently.