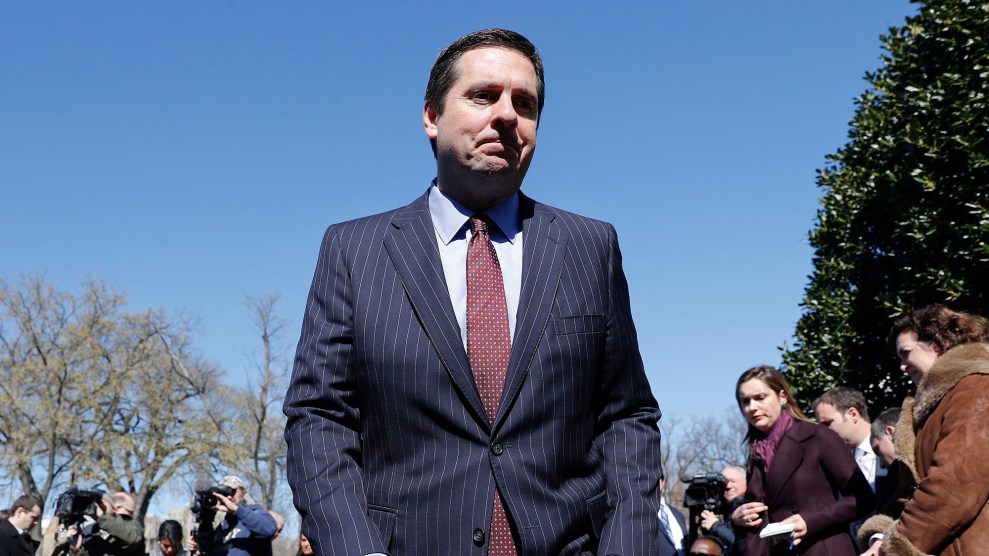 With his bizarre antics and partisan-driven decisions the past week and a half, Rep. Devin Nunes (R-Calif.), the under-siege chairman of the House intelligence committee, has not only triggered a breakdown in the congressional oversight process; he has nearly sparked a constitutional crisis. This may sound hyperbolic, yet Nunes is undermining one of the core principles of the American republic: checks and balances. And there perhaps is no area of government where counterbalance is more needed than national security.

At the heart of the US political system is a bargain. The fundamental notion of the Constitution is that the government serves the citizenry and is accountable to the voters. Yet with the development of the modern national security state—and even before—the executive branch gained the power to engage in secret actions. The spies, covert operators, and eavesdroppers of the intelligence community and the military could perform their duties far from the prying eyes of citizens. This means a vast part of the government operates in secrecy and is free from public scrutiny. How can a democracy allow this? The answer is simple: congressional oversight. In theory, the common folks who are kept in the dark elect senators and representatives who monitor all the secret stuff on their behalf. The Capitol Hill overseers preserve the secrets, but they act as surrogates for the rest of the nation and ensure the covert warriors, spooks, and snoops are acting effectively, honorably, and lawfully in pursuit of the public interest.

That’s the rosy-eyed version. True congressional oversight of the intelligence community didn’t kick in until the 1970s, after a variety of spy-related scandals—secret assassination plots, coups, Watergate, and more. And in the decades since, Capitol Hill monitoring of the intelligence community has sometimes been lackadaisical. (It is almost an impossible task for the House and Senate intelligence committees to track the vast intelligence community, which now consists of 17 agencies.) At other points, there have been conflicts between the committees and the spies. In the 1980s, the late-Sen. Barry Goldwater, the Republican chair of the Senate intel committee, repeatedly clashed with Bill Casey, Ronald Reagan’s free-wheelin’, law-breakin’ CIA chief. Three years ago, Sen. Dianne Feinstein, the Democratic chair of the committee, had an explosive confrontation with John Brennan, the CIA director at the time, over her committee’s investigation of CIA torture. But in each case, oversight continued, with the House and Senate panels often displaying a bipartisanship not found in other corners of Congress.

It’s been an imperfect system. In 2013, Director of National Intelligence James Clapper misled the Senate intelligence committee when he publicly testified that US intelligence did not collect data on Americans. (The Edward Snowden revelations showed otherwise, revealing a massive operation to collect metadata regarding the phone records of Americans.) But at the least, the pretense of intelligence oversight from the legislative branch allows for the clandestine operations conducted by the executive branch through intelligence agencies and the military. And this is but one element of the overall oversight Congress is supposed to mount as a check on the president and executive power. Oversight, an implied obligation within the Constitution, is a crucial function of the House and Senate.

Enter Nunes. He has recently demonstrated he cannot function in an independent, nonpartisan, or forthright manner when conducting intelligence oversight. As chair of the House intelligence committee, he is in charge of the panel’s investigation of Vladimir Putin’s attack on the 2016 campaign and the interactions between the Trump camp and Russia. This is a tough and sensitive assignment. Nunes was on Donald Trump’s presidential election team, and now he is probing the actions of Trump’s associates—and perhaps Trump himself—in an exercise that could produce information that threatens the Trump presidency. He is doing so while Trump is essentially waging war on the investigation. (For months, Trump has dismissed or downplayed the intelligence community’s assessment that Moscow assaulted the election to help Trump. On Monday night, Trump tweeted that the Russia story is a “hoax.”) In such a highly charged political environment, it would be challenging for anyone to lead an effective and independent investigation.

Still, Nunes has underperformed. He initially was reluctant to examine contacts between the Trump gang and Moscow. Then, during the committee’s first public hearing (when FBI chief James Comey undercut Trump’s claim that President Barack Obama had illegally spied on him and revealed the bureau was investigating Trump associates for possibly coordinating with Russians), Nunes behaved as a partisan. As if he were channeling Trump, he said virtually nothing about the main issue: Putin covertly intervening in a presidential election. Instead, he fixated on the (bad!) leak that had exposed former national security adviser Michael Flynn as a liar and forced his resignation. Nunes also repeatedly asked Comey if he would investigate Hillary Clinton and the Clinton campaign, if evidence of contacts between the campaign and Russia emerged. (There has been no evidence of that.) After the hearing, Nunes inexplicably claimed he had never heard of two key figures in the Trump-Russia scandal: Roger Stone and Carter Page.

All of this raised questions about Nunes’ ability to handle an investigation that was scrutinizing people and actions related to the president he supports. Then things got worse. Two days later, Nunes held a surprise press conference—without consulting his staff or fellow members of the intelligence committee—to declare he had reviewed documents indicating that classified intelligence reporting based on lawfully authorized collection aimed at foreign targets might have revealed the identities of Trump transition team members (perhaps Trump himself) who were picked up via what’s known as “incidental collection.” Nunes rushed to the White House to brief Trump, who subsequently declared this “somewhat” validated his claim that Obama had illegally wiretapped him. (It had not.)

The episode appeared to be a stunt designed to provide Trump cover for his baseless charge against Obama—and perhaps to change the channel after the hearing that revealed the FBI investigation. And in the wake of his initial presser, Nunes kept bumbling his descriptions and explanations. It remained unclear if he had uncovered any wrongdoing. He ended up apologizing to his fellow committee members and essentially acknowledged he had gone off half-cocked. He came across as amateurish and erratic. (Three weeks earlier, Nunes had worked with the White House to counter news stories reporting on ties between Trump associates and Russia.)

And there was more. In the middle of this imbroglio, Nunes announced he had canceled the committee’s next public hearing, scheduled for March 28, which was going to feature Clapper, former CIA chief John Brennan, and former Justice Department official Sally Yates, who in January had privately informed the White House that Flynn had lied when he said he had not spoken to the Russian ambassador about the sanctions Obama imposed on Russia as punishment for its hacking-and-leaking operation targeting the Clinton campaign. Nunes offered no good explanation for the scheduling move. (He claimed the committee could not fit in the hearing because of a private session scheduled with Comey and NSA chief Mike Rogers. But when that closed-door hearing was canceled, Nunes did not revive the Clapper-Brennan-Yates hearing.) Democrats on the committee concluded that Nunes had killed the public hearing to spare the Trump White House further embarrassment. That did seem a likely assessment.

By now, Democrats were calling for Nunes to recuse himself from the Russia investigation or quit his post as committee chair, and a handful of Republicans—namely Sens. John McCain and Lindsey Graham—were questioning Nunes’ actions and ability to handle this probe. It was a shit storm, and it was hard to see how the House committee could proceed with a credible investigation or perhaps continue to function at all. Nunes blew up the bond of trust within the committee. He had acted in an impetuous manner. He seemed to care more about Trump’s political standing than about the investigation. (On Fox News, he explained his actions by saying that Trump has “been taking a lot of heat in the news media.”) He also undermined the committee’s credibility. Citizens looking for answers about the Trump Russia scandal will find it hard to accept any conclusions from Nunes at face value.

So Nunes has harmed one of the key oversight mechanisms in the US government: his own committee. This means the check-and-balance process is weaker. That’s not good at a time when the country faces serious national security issues and other matters and when the overall credibility of government is low. Whether Nunes recuses himself or not—for now, he says he won’t—his committee’s investigation is on the verge of irrelevancy, with its credibility shot. (On Tuesday, Nunes announced he was postponing further witness interviews until Comey returned for a private hearing, putting his probe on hold. This week, he also canceled regular committee meetings.) That leaves only the Senate intelligence committee in the driving seat for the Russia investigation. Its chairman, Sen. Richard Burr, a Republican from North Carolina, was also reluctant to assume this mission, but so far there has been no open conflict within the committee, and Democratic members say the probe is moving forward. (The Senate committee will hold its first hearings related to this inquiry on Thursday.) The FBI investigation is also proceeding, but whether this is a counterintelligence probe or a criminal inquiry—or both—the investigation is not designed to yield a public accounting. (The FBI does not produce public reports.) That is the job of the congressional committees. Unfortunately, Nunes has essentially and maybe intentionally sidelined his own probe. In doing so, he renders it less likely the American public will learn the full truth. Moreover—and perhaps worse—he has demonstrated that the system designed to provide accountability for secret government might now be unworkable.