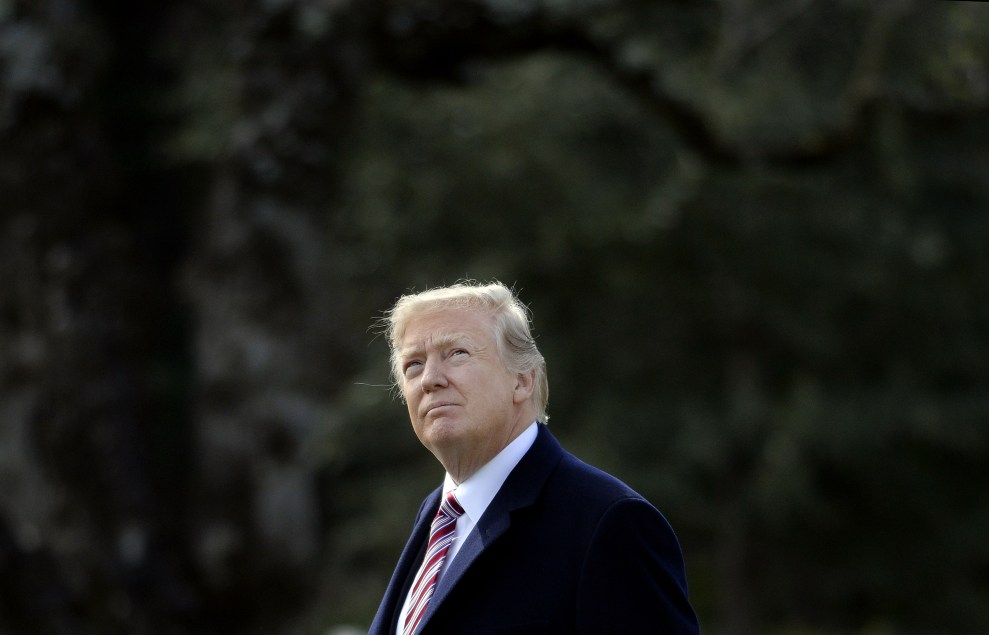 This story first appeared in ProPublica.

The Trump administration appears to be either ignoring or exempting top staffers from its own watered-down ethics rules.

As we have detailed, President Trump in January issued an order weakening Obama-era ethics policies, allowing lobbyists to work at agencies they had sought to influence. The Trump order did limit what lobbyists could do once they entered government, banning them from directly handling issues on which they had lobbied.

But the administration may not be even following that.

We’ve found three hires announced last week who, in fact, are working on the same issues on which they were registered lobbyists while in the private sector.

Lobbying disclosures show that Knight lobbied the government on a host of retirement and tax issues for financial services giant Fidelity. In one case, she lobbied against a regulation requiring financial professionals to act in the best interests of their clients when it comes to retirement accounts such as 401(k)s. The regulation is strongly supported by consumer advocates and strongly opposed by Fidelity. Retirement savers lose billions of dollars a year because of conflicts of interest in the industry, the Obama administration estimated.

The Trump executive order says former lobbyists like Knight cannot work in the “specific issue area” in which they lobbied, though that phrase is not defined.

It’s not at all clear.

One possibility is that the Trump administration has issued waivers exempting Knight and the other lobbyists they’ve hired from the new rules.

Unfortunately, there’s no way for the public to know if this has been done. In a little-noticed action, Trump killed the Obama-era requirement that the Office of Government Ethics publish an annual report disclosing such waivers. Trump’s order also removed the requirement to provide a public interest justification for waivers.

That means Trump can exempt an official from the lobbying limits at any time, for any reason, with no public disclosure.

Critics of the administration’s approach to conflicts of interest said it is impossible to know whether the rules are being ignored or rendered irrelevant by the officials implementing them.

“I very much suspect that Trump’s ethics executive order either is not understood within the administration and not enforced, or the White House counsel is single-handedly interpreting the restrictions of the executive order so narrowly that they are next to meaningless,” said Craig Holman of the watchdog group Public Citizen.

The White House didn’t respond to a request for comment about whether any waivers have been issued or the how the ethics policy is being enforced.

“Shahira Knight has been working with the Office of White House Counsel since before she joined the White House staff to ensure she is in compliance with all rules and regulations.”

The two other lobbyists hired last week, whose names were first flagged by The Intercept, are Michael Catanzaro and George David Banks. They, like Knight, were named to National Economic Council Director Gary Cohn’s senior staff.

Just a few months ago Catanzaro was lobbying on fuel standards and greenhouse gas regulations for the ?American Fuel and Petrochemical Manufacturers. He is now special assistant to the president for domestic energy and environmental policy.

As for Banks, disclosure records state he recently lobbied on environmental issues for a business group. He is now special assistant to the president for international energy and environment.

In an interview, Banks told ProPublica that he had signed an ethics pledge but no one from the White House Counsel’s office has contacted him about any restrictions on his job or the fact that he was a registered lobbyist.

“I haven’t had a conversation about it yet,” he said. He has not received a waiver.

Banks also said that he was mistakenly registered as a lobbyist due to an error by his office manager. His former employer, the American Council for Capital Formation, said in a statement that Banks “did not meet the legal threshold for registering with Congress as a lobbyist” and it is seeking to correct the filings.

That distinction matters because the Trump ethics policy applies only to officials who were registered lobbyists.

The law requires a lobbyist to register based on a complicated test including spending more than 20 percent of his or her time lobbying. In recent years there has been a well-documented decline in the ranks of registered lobbyists, who must report details of their work publicly, and a rise in so-called shadow lobbying by people who do not meet the registration requirements.

The White House spokeswoman said that Knight and Catanzaro “have been working with the Office of White House Counsel since before they joined the White House staff to ensure they are in compliance with all rules and regulations,” but declined to provide any details.

During the Obama administration, the White House posted copies of ethics waivers on its website. Obama issued a handful to former lobbyists during his eight years in office.

The current White House website still has a page for ethics waivers, but it is empty. It states: “Ethics pledge waivers will be published as they become available.”