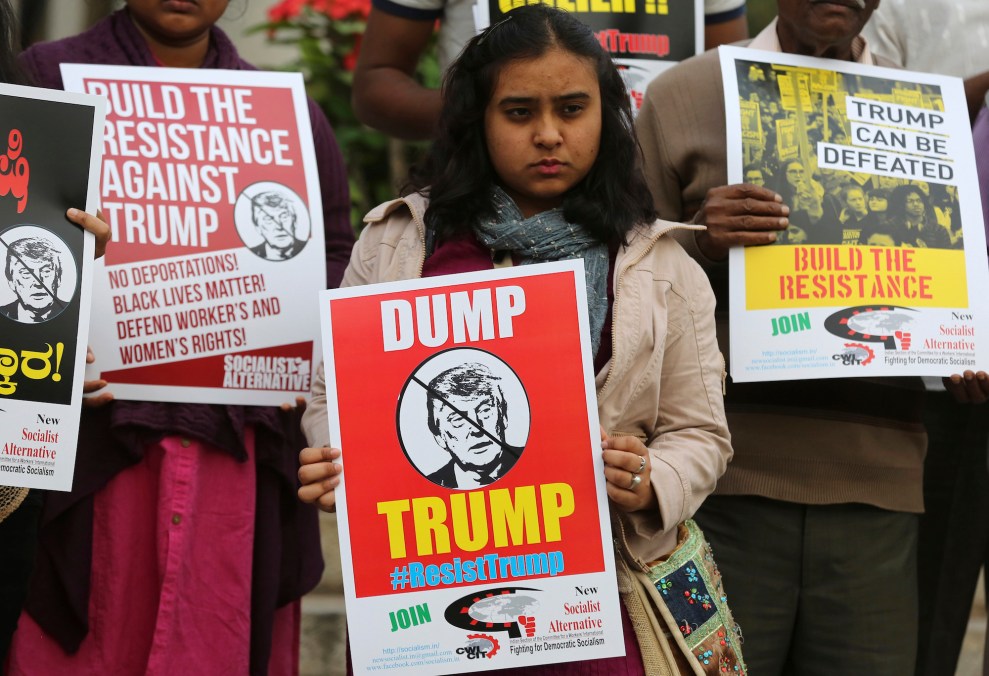 A young Indian woman holds a placard as she listens to a speaker during a protest demonstration against U.S. President Donald Trump in Bangalore, India.Aijaz Rahi/AP

On Friday, Deep Rai, a Sikh man living in a Seattle suburb, was shot on his driveway, after a gunman allegedly shouted “go back to your country” before opening fire and wounding him. The shooting, which is currently being investigated as a potential hate crime, came less than two weeks after a man was arrested after he allegedly shot and killed one Indian man, Srinivas Kuchibholta, and injured his colleague, Alok Madasani, inside a Kansas bar. That shooter also allegedly told the two men to “go back to your country.”

In another incident Thursday, Harnish Patel, an Indian man who had been living in the United States for more than 14 years, was shot and killed near his home in Lancaster, South Carolina. Police officials, however, said they have yet to find evidence the shooting may have been “racially motivated.”

The three separate attacks come amid heightened fear and anxiety among Indians living in the United States, with many pointing to the Trump administration’s continued embrace of harsh anti-immigration policies as a primary factor fueling the violence. Some Indian immigrants have lamented what they see as the public’s lack of response to violent incidents directed at Indians. According to one Media Matters analysis, broadcast and cable news organizations “largely ignored” discussing the February 22 Kansas shooting. Indian newspapers dedicated entire front pages and editorials to addressing the attacks.

“Long years of struggle lie ahead, for the damage Trump has inflicted on the United States’ most cherished values will, almost certainly, outlast his years in office,” said one Indian Express editorial. It also called out the Trump administration for its role in the resurgence of “white nationalist forces” around the country.

After initially rejecting any connection between his rhetoric and the Kansas shooting, President Donald Trump finally condemned racially motivated attacks in his first address to Congress Tuesday. But critics say his brief remarks, while a welcome step towards combating the recent surge in hate crimes targeting minority and religious groups nationwide, are not enough.

In response to the recent attacks, some Indians are calling on the Indian government to issue an official warning against travel to the United States.