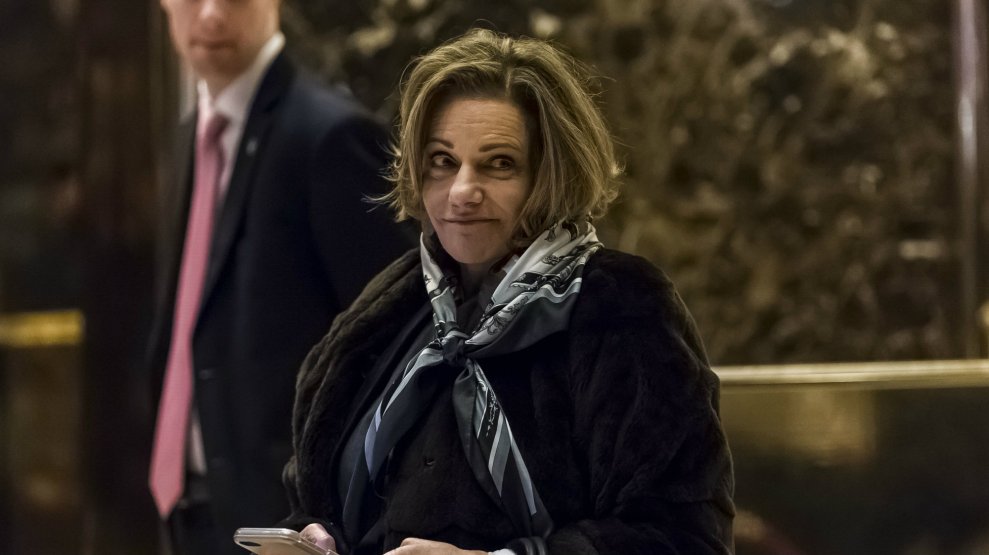 K.T. McFarland—who currently serves as President Donald Trump’s deputy national security adviser—appears to have used thousands of dollars of campaign money several years ago for the design and maintenance of a website promoting her work as a paid political pundit and for payments to a self-described “agent for expert commentators who enjoy being frequent guests on talk radio and TV.”

“Payments for a website to promote her business appear to be an illegal personal use of campaign funds,” says Lawrence Noble of the Campaign Legal Center.

The revelations come at a time of turmoil for Trump’s National Security Council. Last month, retired Gen. Michael Flynn was forced to step down as national security adviser following allegations that he had misled the vice president and other White House officials about his communications with the Russian ambassador. Those communications, which occurred during the presidential transition period, coincided with President Barack Obama’s decision to impose sanctions on Russia. After Flynn’s departure, Trump reportedly promised McFarland that she could remain in her current position. But the White House has also said that the new national security adviser, Lt. General HR McMaster, will be allowed to choose his own staff, making McFarland’s future role uncertain. On Wednesday, Trump appointed Dina Powell, a former Bush administration official and Goldman Sachs partner, as deputy national security adviser for strategy. According to Politico, which first reported the appointment, McFarland will “technically” outrank Powell at the agency. However, Politico cited a source who “said that the move was designed to effectively push out McFarland by putting another person in her role.”

McFarland served in national security roles in the Nixon, Ford, and Reagan administrations. In 2006, she entered the GOP race for US Senate in New York. Had she won the nomination, she would have gone on to challenge Hillary Clinton, the incumbent at the time. But McFarland’s campaign was plagued by missteps and controversies.

After losing the September 2006 primary in a landslide, McFarland transferred her remaining campaign funds, more than $154,000, to a congressional exploratory committee. That decision, in and of itself, was not unusual: Exploratory committees allow potential candidates to raise and spend money for an upcoming campaign—without having to fully declare their intention to run for office.

What was unusual was the length of time McFarland’s exploratory committee remained open: nearly five years, from late 2006 to late 2011. “It doesn’t make sense that she would keep a House exploratory committee open for five years, which is through two election cycles,” says former FEC general counsel Lawrence Noble, who now works for the nonprofit Campaign Legal Center and reviewed McFarland’s campaign expenditures at Mother Jones’ request.

McFarland did not respond to multiple requests for comment, including detailed written questions.

According to two sources who know McFarland, one of whom is a major New York Republican political fundraiser, McFarland did, in the early part of 2007, briefly consider running for New York’s first congressional district in the 2008 race. But her bruising experience with the Senate race led her to quickly abandon the idea, one of the sources said. Another source close to McFarland claims that she remained open to running for office until 2011, when she finally decided against the idea. In January 2007, Newsday reported that in addition to the Long Island-based congressional seat, McFarland’s name had been floated to run for Suffolk County executive. “I wouldn’t close the door on anything right now,” McFarland told the paper.

McFarland kept her exploratory committee open for four years after she made that statement, and the committee continued to spend money. Instead of launching another electoral bid, however, McFarland appears to have used some of the funds to boost her career as a political and national security commentator. 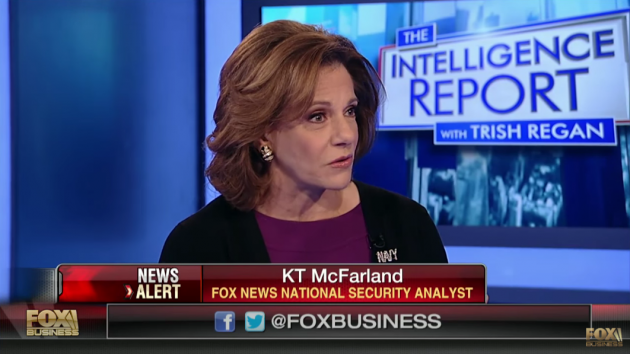 From September 2009 to August 2011, the committee paid $13,887 to a California-based web design firm called MsJones Designs for work it did on McFarland’s site. During that period, the website, KTMcFarland.com, was archived 19 times in the Internet Archive. An examination of those archives turns up no evidence that the site was ever used for a potential run for Congress during that time or anytime thereafter.

Rather, the website was used to promote McFarland’s work as a media figure. The home page featured a banner that referred to her as a “National Security Expert. Columnist. Commentator.” It also displayed a selection of her opinion columns about national security issues and links to her radio commentaries and interviews on Fox News, where she was a paid analyst.

Erika Jones-Clary, who owns MsJones Designs, confirmed in an interview with Mother Jones that she had done freelance web design work for McFarland during the two years during which committee records said she was paid. Jones-Clary said all the work she did for McFarland was for KTMcFarland.com. (Archived versions of the website from that time period specifically credit MsJones.)

“Expenses like these that do not appear to bear any obvious connection to a campaign purpose are troubling,” says former FEC official Daniel Petalas.

Asked if she was aware of McFarland’s website being used for a potential political campaign during this time period, Jones-Clary said, “No, it was not for a campaign. The whole purpose of the website was so that she could market herself.” Jones-Clary, who made sure to tell Mother Jones that she is personally very liberal, said that most of her interactions were with McFarland directly.

None of the archived versions of the website from September 2009 to August 2011 appear to have featured the “paid for by” disclosure that the Federal Election Commission requires candidates, or potential candidates, to include on “web sites available to the general public, regardless of whether the communication expressly advocates the election or defeat of a clearly identified candidate, or solicits funds in connection with a federal election.”

Campaign finance experts say the payments for the committee’s website raise red flags because they appear to be personal in nature. According to the FEC, “Using campaign funds for personal use is prohibited, even when a federal candidate or officeholder is no longer seeking election to federal office.” FEC regulations, which are considered federal law, define “personal use” as “any use of funds in a campaign account of a present or former candidate to fulfill a commitment, obligation or expense of any person that would exist irrespective of the candidate’s campaign.”

While candidates are generally given wide latitude with respect to campaign expenses, McFarland may have gone too far. “Given how seriously both the Department of Justice and the FEC take personal use violations, expenses like these that do not appear to bear any obvious connection to a campaign purpose are troubling,” says Daniel Petalas, who formerly headed the FEC’s enforcement division.

McFarland’s committee also paid out $3,000 to a vendor called SandyPR.com from January 2009 to March 2011. The firm is run by Sandy Frazier, who bills herself as “a successful agent for expert commentators who enjoy being frequent guests on talk radio and TV.” Frazier told Mother Jones that she assisted McFarland with radio and television bookings for the two-year period that matches the dates she was paid by the exploratory committee. Frazier said in a text message that she never worked on any McFarland electoral campaign.

The exploratory committee also made a series of 18 payments totaling more than $11,000 to McFarland’s husband and his investment banking firm. Between March 2007 and August 2011, the exploratory committee made 14 reimbursement payments to Alan McFarland and three reimbursement payments to his firm, McFarland Dewey & Co., for travel, a Toshiba laptop, software, and a “delivery.” There’s nothing illegal about reimbursing a candidate’s spouse (or his business) for these types of expenses as long as they don’t fall into the personal-use category. It’s unclear what travel Alan McFarland paid for or why his investment banking firm had to incur reimbursable expenses. The firm declined to comment.

Perhaps the most surprising thing about McFarland’s potential misuse of campaign funds is that she’d been caught doing it before. In March 2006, as McFarland’s GOP Senate primary was heating up, the New York Daily News revealed that her congressional committee had spent more than $800 on at least two rounds of golf in the Hamptons with former New York City Mayor Rudy Giuliani. (Giuliani’s wife, Judith, joined one of those outings.) Federal law bars the use of campaign funds for entertainment unless it is related to a fundraising event. A Giuliani spokeswoman told the paper at the time that the incidents definitely weren’t part of a fundraiser. “They talked politics,” she said. “That was it.” It was one of many controversies that haunted McFarland throughout the race.

When told by the Daily News that using campaign funds for a personal golf outing was a violation of FEC rules, McFarland responded, “That is ignorance on our part.”