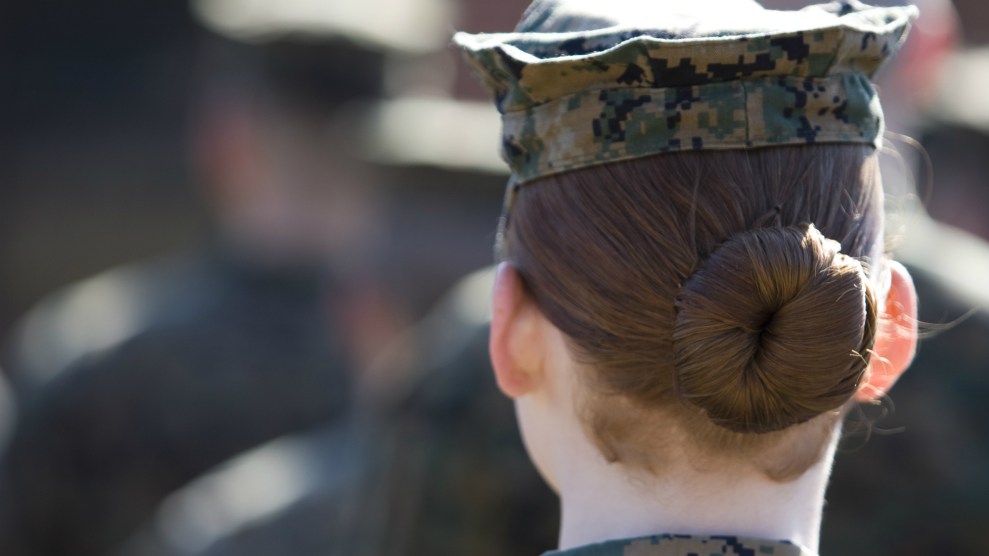 The Unites States Marine Corps is scrambling to address the fallout from revelations over the weekend of a Facebook group where hundreds of nude photos of female service members, veterans, and civilians were posted without their consent by other Marines. Military officials are reportedly investigating the matter, which has reignited discussions over the treatment of women in the military. The photo scandal comes two months after three female Marines became the first women to join the infantry.

The secret “Marines United” Facebook group was first uncovered by The War Horse, a nonprofit news organization run by investigative journalist and military veteran Thomas Brennan. In an article published Saturday by the Center for Investigative Reporting’s Reveal News, Brennan noted that since the end of January, photos of more than two dozen women—many on active duty—with their names, location, and military rank were shared on the page. In at least one incident, comments on a photo advocated for a woman to be sexually assaulted.

The scandal “underscores ongoing problems of sexual harassment within military ranks and could hurt recruitment of women,” Brennan writes. “Officials within the Defense Department confirmed it also puts service members at risk for blackmail and jeopardizes national security.”

Photos posted in the group, which has more than 30,000 members, many using their personal Facebook accounts, reportedly drew plenty of attention, inspiring more than 2,500 comments. According to Brennan, some members of the Facebook group “invited others to collect, identify and share photos of naked or scantily clad service women.” Many group members also had access to a Google Drive that included dossiers with women’s names and social media information, as well as photos of unidentified women in various states of undress. The total number of photos shared in the “Marines United” group and through Google Drive is unknown.

The photos have come from a variety of sources. Two women, who had their photos shared online, said that they believe former partners leaked the images. Others said that they fear their accounts may have been hacked and their personal photos stolen. Another woman learned that she had been stalked by a fellow Marine only after Brennan contacted military officials for comment.

Shortly after Brennan requested comment, social media accounts behind the photo sharing were removed by Facebook and Google at the military’s request. A formal investigation has been launched by the Naval Criminal Investigative Service. At least one Marine has already been discharged for photographing a female corporal without her consent.

An internal document recently circulated to military public affairs officers notes that any Marines found to have posted explicit photos without a woman’s consent could face charges under the Uniformed Code of Military Justice. Others who shared the photos could face criminal charges or administrative action.

“No person should be treated this way. It is inconsistent with our Core Values, and it impedes our ability to perform our mission,” said Sgt. Major Ronald L. Green, the Marines’ highest ranking enlisted service member, in a statement to CBS News. According to the Associated Press, the Defense Department has launched its own review into the incident.

The controversy follows a 2015 announcement by then-Defense Secretary Ash Carter ending the ban on women in military combat roles. The scandal also arises as the military struggles to deal with sexual assaults in its ranks. There were roughly 6,000 reports of military sexual assault in 2015, the most recent year for which numbers are available, according to the Pentagon. Advocates argue that fear of reprisal has deterred many victims from reporting assaults, leaving the exact number unclear.