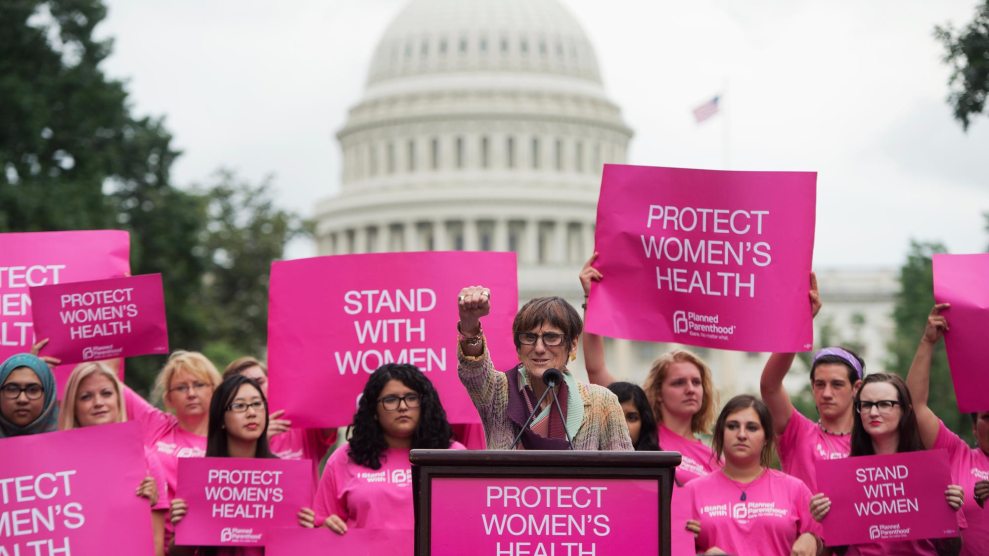 Last week, a leaked draft of Republicans’ Affordable Care Act repeal proposal included a plan to defund Planned Parenthood by making the largest women’s health care provider and others who offer abortions a “prohibited entity” for federal dollars—meaning that patients on Medicaid would no longer be allowed to use their coverage for health care at Planned Parenthood clinics around the country.

Faced with the prospect of as many as 2.5 million patients losing their health care, more than 150 Planned Parenthood patients and providers gathered on Capitol Hill on Wednesday for more than 200 meetings with lawmakers to describe the impact the organization has had on their lives and health care when facing financial hardship. At a press conference, several former patients spoke about their experiences receiving care while uninsured, underinsured, or otherwise unable to afford it.

“My two children are the biggest blessing in my life, and I’m thankful every day that I get to be their mother,” said Courtney Everette of Chicago. “I know for sure that without Planned Parenthood, I wouldn’t have had that privilege.”

When Everette was a graduate student aging out of her parent’s health insurance, she was unable to afford the hormonal birth control that was essential to managing her endometriosis, a chronic condition that affects the uterine lining and can cause infertility. She was able to secure access through her local Planned Parenthood and, years later, learned from her doctors that had she not managed her care as prescribed, she would not have been able to conceive children.

Jamie Benner, a mother from upstate New York, described her local Planned Parenthood’s efforts to get testing and Medicaid coverage when she was uninsured and found a lump in her breast. The testing detected her breast cancer in the nick of time, and Jamie is now healthy. “Had Planned Parenthood waited a day, I would have had stage 4 cancer and I wouldn’t be here,” she said. “Planned Parenthood made sure I would be here to be there for my girls.”

Defunding Planned Parenthood has long been a goal of conservatives in Congress, and efforts have intensified in the last two years following a series of secretly recorded, deceptively edited videos showing Planned Parenthood staff discussing the sale of fetal tissue, which would be illegal. (Dozens of state-level investigations found no evidence of such wrongdoing by the women’s health care provider.) Seeking to win over pro-life voters while on the campaign trail, Donald Trump targeted the woman’s health provider as well, and since his inauguration Republican lawmakers have moved quickly to try to make this goal a reality: Sen. Joni Ernst (R-Iowa) filed a bill in the Senate, while another measure, sponsored by Rep. Diane Black (R-Tenn.) passed in the House.

Opposition to funding Medicaid for patients who use Planned Parenthood is connected to opposition to abortion, but the Medicaid funds at issue here almost never cover abortions. It has been illegal to use federal funds to cover most abortions for more than 40 years, thanks to the Hyde Amendment—an appropriations rider first passed in 1976 and tacked on to every federal budget since.

Lori Hawkins, a Planned Parenthood patient from House Speaker Paul Ryan’s Wisconsin district—where in two counties, Racine and Walworth, Planned Parenthood centers are the only options for Medicaid patients seeking family-planning services—came to DC to lobby her congressman, something she had never done before. She said she was moved to make the trip because “I feel that since this election, there’s a real possibility that people are going to lose their health care.”

Years ago as an underinsured recent college graduate, Planned Parenthood diagnosed tumors and cysts on Hawkins’ ovaries before they destroyed any chance of her having a child. “Because of Planned Parenthood’s intervention, I was able to become a mother with two children,” she said. Hawkins’ 13-year-old daughter came with her to lobby Speaker Ryan.

Hawkins told Mother Jones, “She wanted to come today because she wanted the staff to look her in the eye and realize that she wouldn’t be here today if it wasn’t for Planned Parenthood.”