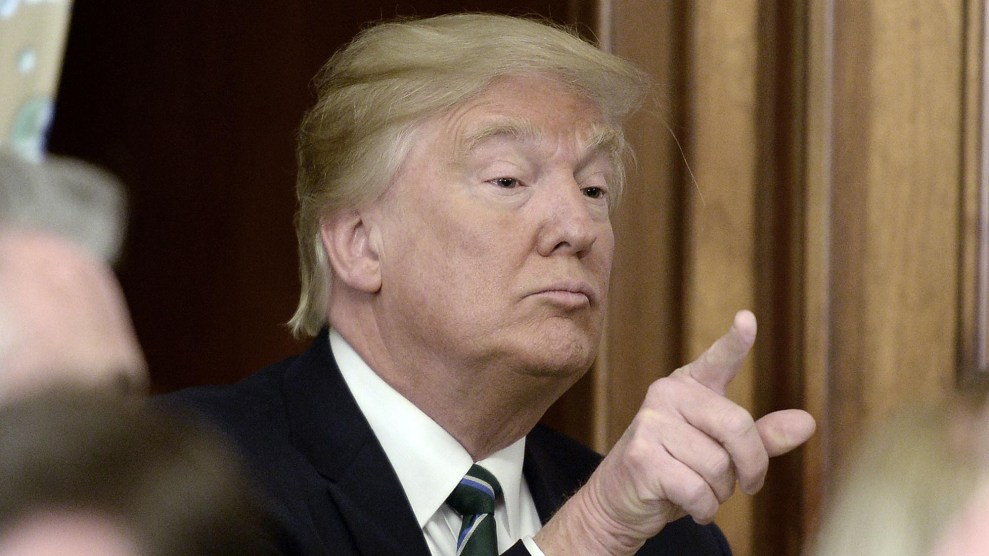 On Thursday afternoon, the top Republican and Democrat on the Senate Intelligence Committee refuted the president’s evidence-free claim that the Obama administration had wiretapped him during last year’s presidential campaign. “Based on the information available to us we see no indications that Trump Tower was the subject of surveillance by any element of the United State government either before or after Election Day 2016,” intelligence committee chairman Richard Burr (R-N.C.) and vice chairman Mark Warner (D-Va.) said in a joint statement.

Democrats aren’t ready to leave it there, though, hoping to hold Donald Trump accountable for his claims. House intelligence committee member Rep. Mike Quigley (D-Ill.) introduced a resolution earlier Thursday morning asking Trump and US Attorney General Jeff Sessions to provide the House with any documents or records related to Trump’s tweets accusing Obama of wiretapping. During an early morning Twitter rant two weeks ago, Trump made a series of accusations, including asking whether it was legal “for a sitting President to be ‘wire tapping’ a race for president prior to an election,” and saying that “a good lawyer could make a great case out of the fact that President Obama was tapping my phones in October.”

Quigley’s resolution calls on the White House and Department of Justice to provide the materials within 14 days after the resolution is adopted. Quigley referred to his resolution as “a task not welcomed but necessitated by the President’s seemingly baseless accusations that the Obama administration wiretapped Trump Tower during the presidential campaign” when he introduced the resolution on Thursday. “As a member of the intelligence committee, I have seen absolutely no evidence that supports the president’s claims.”

Sessions told reporters on Wednesday that he’d given Trump no reason to believe Obama had ordered surveillance on Trump. Chairman of the House intelligence committee Rep. Devin Nunes (R-Calif.) also said on Wednesday he’d seen no information to back up Trump’s tweets, and Republican Sen. Lindsey Graham (R-S.C.) announced that FBI Director James Comey committed to provide a classified briefing on the wiretapping issue “at some time in the future.” Comey briefed top members of Congress Wednesday on whether the FBI was investigating ties between the Trump campaign and Russia.

“He stands by it,” White House Press Secretary Sean Spicer said Thursday after reporters asked about the bipartisan doubt about Trump’s claims.*

On Monday, the Department of Justice missed a deadline set by the House intelligence committee asking for evidence to back up Trump’s claims. The DOJ asked the committee for more time.

“If the White House and the Department of Justice are unable to produce this evidence, as I suspect will be the case,” Quigley said Thursday, “the President owes the American people a thorough and immediate explanation and apology.”

Read the full resolution below:

This story has been updated to include Spicer’s comments after Thursday’s press briefing.