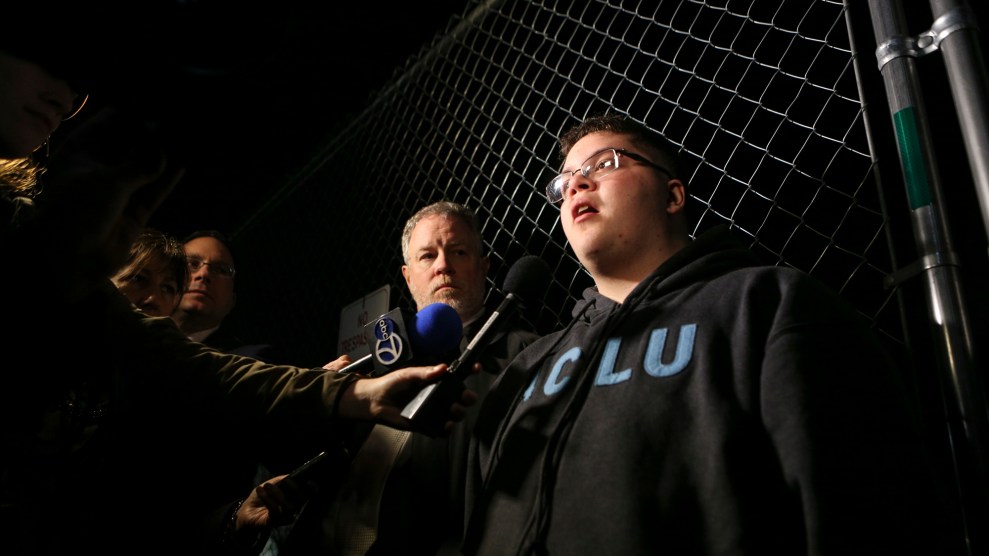 ??Gavin Grimm talks with reporters during a protest outside the White House on February 20.Oliver Contreras/AP

The Supreme Court on Monday kicked a historic transgender rights case back to a lower court, after the Trump administration changed the federal government’s position on whether trans students can use bathrooms matching their gender identities.

The highly anticipated case, which had been scheduled for a Supreme Court hearing later this month, centers on a 17-year-old transgender boy named Gavin Grimm who is suing for access to the boys’ bathroom at his school in Virginia. Grimm’s case argues that the school’s decision to block him from that bathroom violates Title IX, a federal civil rights law that prohibits discrimination based on sex in public schools. Had the Supreme Court chosen to hear the case, it would have been the first time the justices had ever considered a question about trans rights.

“Today our momentum was sent on a detour, but nothing can stop it. We will fight. We will win,” tweeted one of Grimm’s attorneys.

Grimm, who was born a girl but identifies as a boy, started using the boys’ bathroom at school his sophomore year, after doctors diagnosed him with gender dysphoria and recommended that he be treated as a boy. But when parents at his school complained, his school board intervened, saying he’d either need to go back to the girls’ room or use a private bathroom near the nurse’s office. The school board said it was trying to protect the privacy of other students.

Last May, the Obama administration put out a directive warning that public schools could lose federal funding if they blocked trans kids from using the bathrooms of their choice. The directive said Title IX prohibited discrimination based on gender identity, not just based on sex. But in February, President Donald Trump’s administration changed the federal government’s position, saying that it wasn’t sure how to interpret Title IX and that schools could go back to blocking trans kids from bathrooms. Because the 4th Circuit Court of Appeals had relied heavily on the Obama administration’s interpretation in its decision about Grimm’s case last year, the Supreme Court on Monday ordered the circuit court to reconsider the case. Now it’ll be up to that lower court to decide what Title IX means, and whether the law prohibits discrimination based on gender identity.

Over the past couple of years, the debate over transgender rights and bathrooms has heated up nationally. Only one state, North Carolina, has enacted legislation requiring trans people to use bathrooms matching their birth sex instead of their gender identity. But at least 10 other states have considered similar legislation already this year, and schools across the country have instituted similar policies. In an amicus brief filed last week, parents wrote about how their trans children have been humiliated and stigmatized as a result. Many others also submitted briefs in support of Grimm, including nearly 200 members of Congress, dozens of major corporations, 18 states and over 30 US cities, the NAACP, and the National Parent-Teacher Association (PTA).

The issue isn’t just about bathrooms. “It’s about the right of trans people to exist in public spaces,” Grimm told reporters on a press call on Monday. Without access to bathrooms, he says, it’s hard for trans people to sit through class, run errands, or hold jobs.

The case will not come before the Supreme Court again this term, Grimm’s attorneys say, and possibly not for another few years. “We will not have our day in the high court this term but we will continue to fight in the lower courts,” Chase Strangio, one of his lawyers at the American Civil Liberties Union, wrote. “Today our momentum was sent on a detour,” he added in a tweet, “but nothing can stop it. We will fight. We will win.”

Grimm was sitting in class on Monday morning when text messages started flooding his phone with the Supreme Court’s announcement. He was disappointed but vowed to keep fighting. Whether it takes another year or 10, he says, “I’m in it for the long haul.”