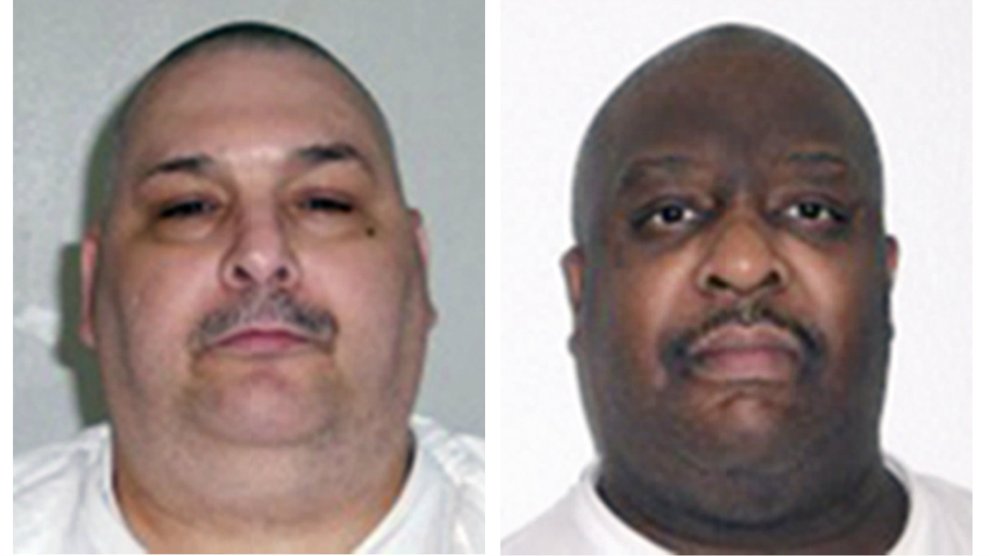 Arkansas Department of Correction via AP

Last night Arkansas became to first state to conduct a double execution in the United States in 17 years, but not without questions about whether or not the first inmate suffered before he died. A spokesman for Arkansas Gov. Asa Hutchinson called the procedures “flawless.”

The state of Arkansas planned to execute eight men in 11 days because its supply of the controversial sedative, midazolam, which has been behind several botched executions in recent years, is set to expire at the end of the month.

Jack Jones, who was convicted of the rape and murder of Mary Phillips in 1995, was administered the lethal drug cocktail and was pronounced dead at 7:20 p.m. The second execution, which was scheduled to take place two hours later, was temporarily put on hold by District Judge Kristine Baker after Williams’ lawyers claimed that after the midazolam was administered, Jones was moving his lips and gulping for air, evidence that he was not completely sedated. A media witness to the execution also said that Jones’ lips were moving for one to two minutes.

Andrew tells us that curtain in the death chamber opened at 7:04. Injection took place 7:06. Jones’ lips moved for 1-2 mins.

However, the state denied claims that Jones suffered, calling them “utterly baseless.” The stay on the second execution was lifted, and Marcel Williams, who was convicted of the kidnap, rape, and murder of Stacy Errickson in 1994, was dead approximately three hours later.

Arkansas original plan suffered from a series of legal setbacks in the last two weeks. The execution of Stacey Johnson was stayed after the state’s Supreme Court ruled that he should be given a chance to prove his innocence using DNA testing, but the state put Ledell Lee to death late Thursday night. While both Jones and Williams appealed to the U.S. Supreme Court for reprieves, the high court refused to halt Monday night’s back-to-back executions. Justice Sonya Sotomayor was the only member of the court to dissent.

Death penalty advocates asked for clemency, charging that both of the inmates who were ultimately put to death received insufficient counsel during trial and suffered severe abuse during their childhoods. Jones suffered from bipolar disorder and depression and had vivid hallucinations of being attacked by bugs as a child. He also attempted suicide twice. Jones was also physically abused by his father and sexually assaulted by three strangers. However, Jones’ lawyers failed to provide jurors with any of this mitigating evidence. They also used an expert who surrendered his medical license for a year to enter substance abuse treatment. He told the jury that since he was bipolar himself, he knew that Jones wasn’t bipolar. In a lengthy final statement, Jones apologized to the daughter of the woman he killed. “I’m sorry,” he said. “I am not a monster. There was a reason why those things happened that day.”

Williams’ story is similar. Starting at age nine, his mother began letting adult woman sexually abuse her child in exchange for food and shelter. He also suffered from severe physical abuse at the hands of his mother and grew up in crushing poverty; his home was filled with roaches and rats and the utilities were often turned off. Williams’ lawyers failed to provide this information to jurors during trial and a federal judge found the evidence compelling enough to reverse his death sentence. However, an appellate court reinstated his death sentence saying that because of a procedural error, Williams should never have received a hearing.

After both men were dead, Gov. Hutchinson released a statement after the executions saying, “Justice has prevailed.”

Now three men have been executed in Arkansas, three have received stays, and one inmate received a stay after the parole board recommended clemency. Arkansas still has one man awaiting execution before the deadline of the drug expiration. Kenneth Williams, an intellectually disabled man who killed Cecil Boren in 1999 after escaping from prison where he was serving a life sentence for the murder of Dominique Hurd in 1998, is scheduled to die on April 27.