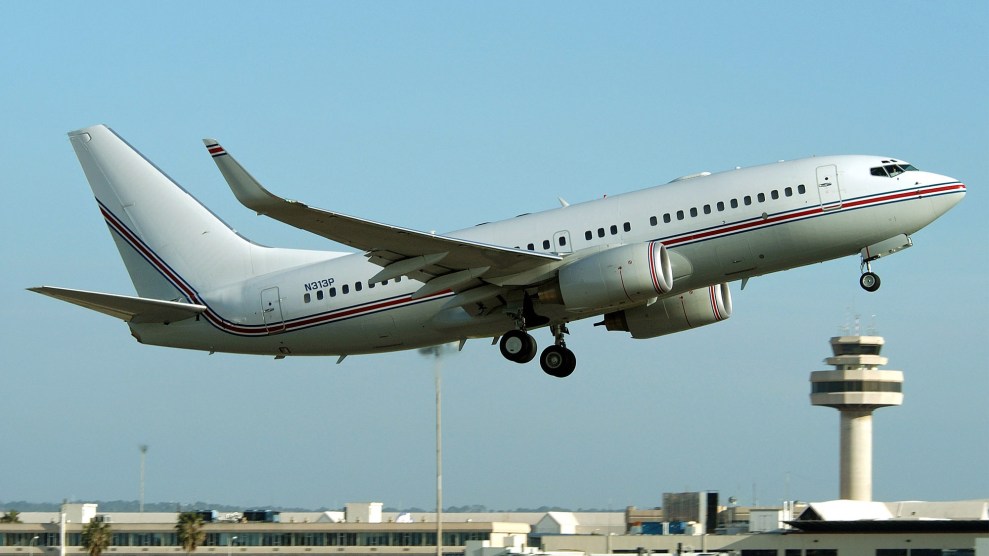 A Boeing 737 with registration number N313P takes off in Spain in March 2004.Toni Marimon/AP

For $27.5 million* you can own a valuable memento of a dark period of recent American history. The jet above is currently for sale in Dallas, Texas. The Boeing 737 business jet seats up to 16 passengers and includes one queen and two single beds, a lounge bar, and three built-in 42-inch TV screens. The jet’s listing does not mention, however, that in its former career, it was part of the Central Intelligence Agency’s extraordinary rendition program, transporting “high-value” terrorism detainees around the globe to “black sites” where they faced “enhanced” interrogation techniques.

The jet’s history can be pieced together from news clippings, human rights reports, and Federal Aviation Administration documents. In 2006, the Chicago Tribune reported on a specially modified 737 with the tail number N313P, which had been observed flying between the Middle East, Europe, and the United States. The paper linked the jet back to the CIA through a series of front companies around Washington, D.C. One of those companies was Premier Executive Transport Services, which had taken ownership of the new plane in May 2002. The Washington Post found that the names of 325 people ostensibly affiliated with this shadowy company could be traced back to five Beltway-area P.O. boxes. When reporters searched for some of those names in public databases, what little they could turn up was a bit spooky: “Although most names were attached to dates of birth in the 1940s, ’50s or ’60s, all were given Social Security numbers between 1998 and 2003.”

During its time with CIA-linked companies, N313P flew all around the world, landing in spots like Morocco, Afghanistan, Libya, Uzbekistan, and Guantanamo Bay. In September 2003, it touched down at a remote airport in Poland. As the Tribune later suggested, this trip may have had something to do with the Polish intelligence complex in Stare Kiejkuty, which the European Court of Human Rights later found housed a secret CIA site. Before the release of the Senate intelligence committee’s 2014 report on the CIA’s post-9/11 detention and interrogation program, the Washington Post reported that American intelligence officers had probably abused and tortured detainees at the black site at Stare Kiejkuty. N313P landed near Stare Kiejkuty at least once.

“It doesn’t have a heart and soul,” says a representative of the company brokering the sale. “It’s just a really beautiful piece of equipment.”

In 2004, the aircraft carried the “shackled and hooded” Binyam Mohamed, an Ethiopian who was held in Guantanamo from 2004 until 2009. A few days later, the jet is also believed to have transported Khaled al-Masri, a Lebanese-born German citizen who was held in an American-run prison in Afghanistan for five months. Al-Masri, who claims he was shackled, drugged, and beaten in captivity, was released after his captors told him they’d gotten the wrong man.

That same year, as reported by the Guardian, Fatima Bouchar and her husband, Abdel-Hakim Belhaj, were abducted by three Americans in Bangkok, Thailand, forced aboard the aircraft. The couple had fought against Libyan dictator Moammar Qaddafi during the 1980s and 1990s, and according to a Human Rights Watch investigation, their rendition back to Libya had been brokered in a deal between the CIA, British intelligence, and the Qaddafi regime for “mutual benefit.” During the 17-hour journey to Tripoli, Bouchar, who was four months pregnant, was bound to a stretcher and wrapped head-to-foot in tape. Belhaj was shackled in a painful stress position for the flight’s duration. Bouchar spent four months in detention in Libya. Belhaj remained in prison there until 2010.

The jet flew for the CIA for more than four years. Its time with The Company ended in 2006 when, according to FAA records, it was sold to MGM Mirage Resorts with a new tail number. (Premier Executive Transport Services disincorporated in 2008.) MGM Mirage operated the aircraft out of Las Vegas until last December, when it was sold to Embraer Executive Aircraft, a private jet manufacturer.

In addition to its executive trappings, the aircraft has a nifty seven-tank auxiliary fuel system—perfect for transatlantic flights from, say, Morocco to Cuba. With just 5,942 hours of flight time logged to date, this jet is practically new. (Commercial jets typically fly approximately 3,500 hours annually.)

A representative of the company brokering the aircraft’s sale was reluctant to speak but conceded that potential buyers would probably be aware of the jet’s history. “Everybody knows,” she said. Yet none of that should have any bearing on its value, she asserted. “It doesn’t have a heart and soul. It’s just a really beautiful piece of equipment.” Until a buyer is found, the certified pre-owned CIA rendition plane is available for viewing by appointment.

*Update, April 24, 2017: It looks like the airplane has a special new clearance price of $24.5 million. Act now, because, as the listing says, this baby is “strategically priced to sell.”