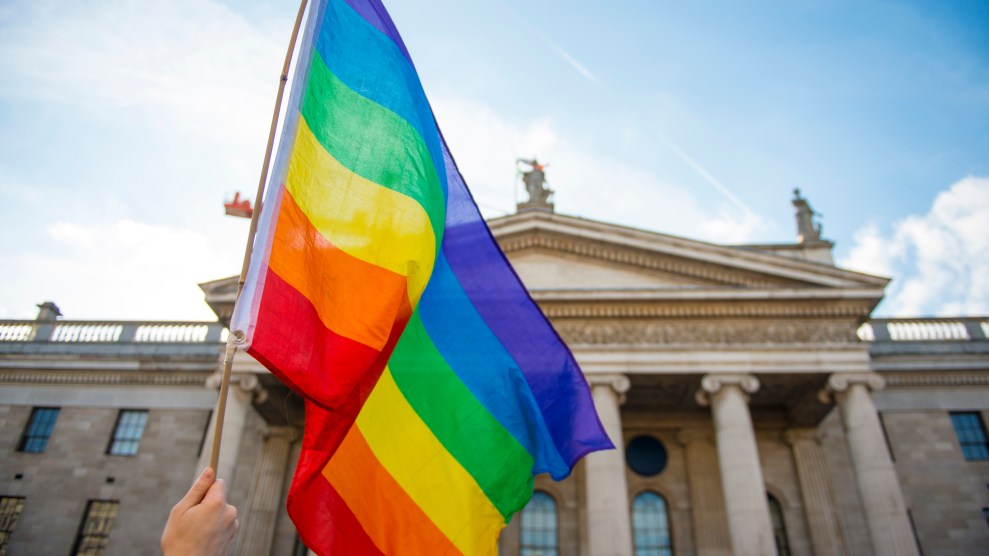 In a historic decision, a federal appeals court in Chicago ruled Tuesday that the Civil Rights Act of 1965 protects gay and lesbian employees from workplace discrimination.

“It would require considerable calisthenics to remove the ‘sex’ from ‘sexual orientation.'”

The 7th Circuit Court of Appeals—which covers federal lawsuits in Indiana, Illinois, and Wisconsin—found that Title VII of the landmark legislation prohibits sexual orientation discrimination because it’s a form of sex discrimination. The law explicitly bars employment discrimination on the basis of “race, color, religion, sex, or national origin.”

“It would require considerable calisthenics to remove the ‘sex’ from ‘sexual orientation,'” Judge Diane Wood wrote for the court, which ruled 8-3 on the matter.

It’s the first federal appeals court in the country to reach this decision, and legal experts say it could have a major impact on civil rights protections for LGBT people nationally. “This is something that will roll out coast to coast, we think,” says Greg Nevins, the Lambda Legal attorney who handled the case. “You’re going to see circuit after circuit follow exactly what this court did today.”

Lambda Legal, a national LBGT rights group, brought the lawsuit on behalf of Kimberly Hively, an instructor at Ivy Tech Community College who alleged that she had been denied full-time employment and promotions after she was seen kissing her then-girlfriend in the parking lot of the school.

Because courts elsewhere in the country have ruled the opposite way in other cases, the Supreme Court will likely take up the issue in the relatively near future, says Adam Romero, director of legal scholarship at the Williams Institute at UCLA, which researches LGBT law and policy.

The 7th Circuit ruling was notably the first time such a case has been heard en banc by a federal appeals court—meaning the entire court was present. A three-judge panel had previously ruled against Hively, but when a court sits en banc, it can reverse its prior rulings. That’s important because three-judge panels at two other federal appeals courts—in Georgia and New York—recently ruled that sexual orientation is not covered by Title VII. Nevins is optimistic that if these courts reconsider their cases en banc, as Lambda Legal has requested in Georgia, they may change their mind. “The seeds are already sown for that to happen sooner than later,” he says.

It’s also possible the 7th Circuit’s decision could affect future civil rights cases outside the workplace. The case in Chicago focused on Title VII, the part of the Civil Rights Act that deals with workplace discrimination. But many courts have ruled previously that Title IX—a portion of the Civil Rights Act that deals with discrimination in schools—should be interpreted along the same principles as Title VII. “When you look at the overwhelming authority that says they’re interpreted the same way, it’s only a matter of time” before courts find that the prohibition on sex discrimination in education includes sexual orientation discrimination, Nevins says. “Wherever sex discrimination is prohibited under federal law, this is going to have a powerful effect.”

Romero of the Williams Institute agrees that while the 7th Circuit decision is limited to Title VII, “courts often look to Title VII jurisprudence when interpreting other sex discrimination prohibitions, such as Title IX.” However, Nevins notes that Title II of the Civil Rights Act, which deals with public accommodations, does not include language barring sex discrimination. That means that under federal law, at least, a hotel could refuse service to a guest for being a woman or being gay, he says.

The decision is a bright spot for LGBT activists who have faced a series of setbacks under the Trump administration. President Donald Trump has appointed a number of officials who have opposed gay and transgender rights in the past, and in February his administration rescinded protections for transgender kids in schools. In January, however, the White House said it would enforce an Obama administration order prohibiting companies with federal contracts from discriminating on the basis of sexual orientation.