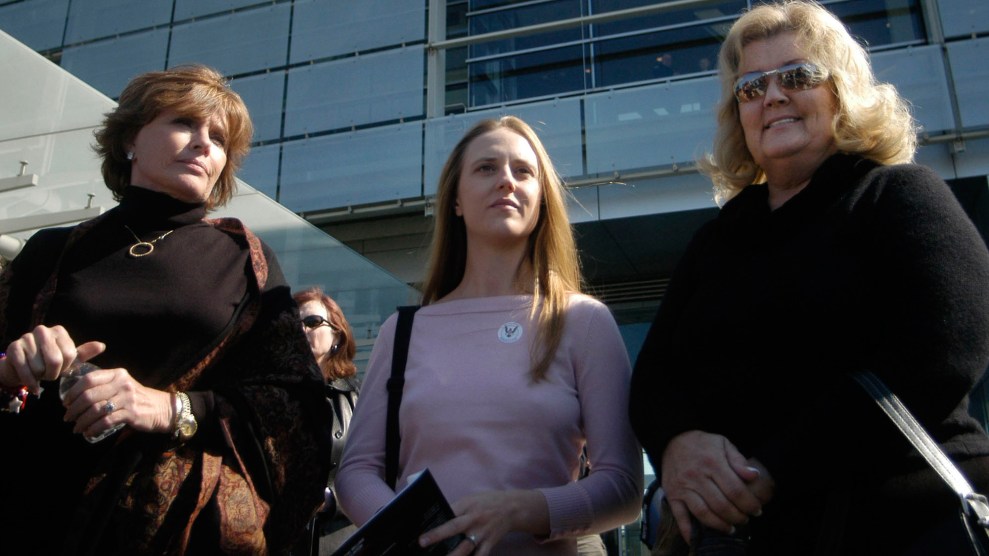 As an undergraduate studying calculus at Stanford University in the mid-1990s, Candice Jackson “gravitated” toward a section of the class that provided students with extra help on challenging problems, she wrote in a student publication. Then she learned that the section was reserved for minority students.

“I am especially disappointed that the University encourages these and other discriminatory programs,” she wrote in the Stanford Review. “We need to allow each person to define his or her own achievements instead of assuming competence or incompetence based on race.”

Although her limited background in civil rights law makes it difficult to infer her positions on specific issues, Jackson’s writings during and after college suggest she’s likely to steer one of the Education Department’s most important—and controversial—branches in a different direction than her predecessors. A longtime anti-Clinton activist and an outspoken conservative-turned-libertarian, she has denounced feminism and race-based preferences. She’s also written favorably about, and helped edit a book by, an economist who decried both compulsory education and the landmark Civil Rights Act of 1964.

Jackson’s inexperience lead some observers to wonder whether she lacks sympathy for the traditional mission of the office she’s been chosen to lead.

Jackson’s inexperience, along with speculation that Secretary of Education Betsy DeVos will roll back civil rights enforcement, lead some observers to wonder whether Jackson, like several other Trump administration appointees, lacks sympathy for the traditional mission of the office she’s been chosen to lead.

Her appointment “doesn’t leave me with a feeling of confidence with where the administration might be going,” said Theodore Shaw, director of the Center for Civil Rights at the University of North Carolina School of Law, who led Barack Obama’s transition team for civil rights at the Department of Justice.

On Wednesday, DeVos formally announced Jackson’s position as deputy assistant secretary in the Office for Civil Rights, a role that does not require Senate confirmation. The 39-year-old attorney will act as assistant secretary in charge of the office until that position is filled. DeVos has not yet selected a nominee, who would have to receive Senate confirmation. As acting head, Jackson is in charge of about 550 full-time department staffers, who are responsible for investigating thousands of civil rights complaints each year.

Jackson referred ProPublica’s interview request to the U.S. Department of Education, which did not respond to our request. Neither Jackson nor the department responded to ProPublica’s emailed questions.

Jackson takes over an office that has been responsible for protecting students from racial, gender, disability and age discrimination for decades. Under the Obama administration, the office increased its caseload. It emphasized to colleges that they could give preferences to minorities and women to achieve diversity, and advised them to be more aggressive in investigating allegations of rape and sexual harassment on campus. Some of the guidance from the office provoked controversy, particularly among Republicans who have long called for the office to be scaled back.

Jackson grew up in the Pacific Northwest, where her parents operate two medical practices, specializing in family and aesthetic medicine. Her father, Dr. Rick Jackson, also ran unsuccessfully for Congress and is a country music singer under the name Ricky Lee Jackson. Jackson’s brothers have acting and music careers as well. Jackson and her mother have helped provide “business and legal” management for her father and brothers, according to a biography on her website from 2016.

In 2009, Jackson co-wrote a Christian country song with her father and brother, called “Freedom, Family and Faith.” The lyrics had an anti-government tinge: “Some politician wants our liberty/ They say just trust me, we’re all family/ I’ve got a family and hey, it’s not you/ Don’t need Big Brother to see us through.”

While in college, Jackson joined the Stanford Review as a junior, after transferring to the university in 1996 from a community college in Los Angeles. When she arrived, according to a Review article she wrote during her senior year, she was “eager to carry the message of freedom to Stanford through the only conservative publication on campus.”

Eric Jackson, no relation, who is Candice’s friend, former classmate and book publisher, said the conservative perspective of the Stanford Review often went against the status quo on campus. It took “courage,” he said, to write for the publication, which was co-founded in 1987 by PayPal billionaire and Donald Trump adviser Peter Thiel. “A number of us got death threats,” he recalled.

One topic of heated debate on campus was affirmative action, which California banned in public institutions, such as universities, in 1996. The prohibition did not affect private universities, like Stanford, which could continue to employ preferential policies both in admissions and in special programs designed to assist minority students in college-level math and science courses.

During her senior year, Candice Jackson penned her objections in an op-ed, contending the university “promotes racial discrimination” with its practices.

“As with most liberal solutions to a problem, giving special assistance to minority students is a band-aid solution to a deep problem,” Jackson wrote.

Jackson was far from the only critic of such minority-only programs. In 2003, the Massachusetts Institute of Technology opened up similar programs to all races.

In another article Jackson penned for the Review during her senior year, entitled “How I Survived Stanford Without Entering the Women’s Center,” she condemned feminism on campus.

“In today’s society, women have the same opportunities as men to advance their careers, raise families, and pursue their personal goals,” she wrote. “College women who insist on banding together by gender to fight for their rights are moving backwards, not forwards.”

In the article, she encouraged women to choose conservatism over feminism. “I think many women are instinctively conservative, but are guided into the folds of feminism before discovering the conservative community,” she wrote.

She concluded, “[t]he real women’s issues are conservative ones.”

Her former Stanford Review colleague, Eric Jackson, told ProPublica that her college writings are nearly 20 years old and that it’s important to understand the context of her commentary. “The feminist culture she was critiquing was different than what happens today,” he said. Jackson, he added, is “very pro-woman.”

After Stanford, Jackson “exchanged conservatism for libertarianism,” she later wrote. She did a summer fellowship at the Ludwig von Mises Institute, a free-market think tank in Auburn, Alabama, according to an institute publication. The institute was reportedly founded with money raised by former congressman and 1988 Libertarian Party presidential candidate Ron Paul, and is a leading hub of contemporary libertarian scholars.

While at the Institute, Jackson provided editorial assistance on a book of collected essays by the institute’s co-founder, economic historian Murray N. Rothbard. A charismatic figure who devoted his life to ideas, Rothbard died a few years before Jackson’s fellowship. Mark Thornton, an economist and a senior fellow at the Mises Institute who vaguely recalled Jackson but did not specifically remember her role at the center, said that her editorial assistance may have involved proofreading.

“To force these children to be exposed to schooling, as the State does almost everywhere, is a criminal offense to their natures,” wrote Rothbard. “In any case, the instruction has almost no effect on these children, many of whose hours of life are simply wasted because of the State’s decree.”

This was not Jackson’s only connection to Rothbard’s work. She also wrote two papers analyzing his theories. One essay compared his philosophy to that of libertarian novelist Ayn Rand. In the other, she wrote that his 1982 book, “The Ethics of Liberty,” “shines as a monumental achievement, meeting Rothbard’s goal of setting forth ‘a positive ethical system … to establish the case for individual liberty.'”

In other essays, published on a former colleague’s website, Rothbard called the Civil Rights Act of 1964 “monstrous,” and lambasted one provision of it, which prohibited employment discrimination, as “a horrendous invasion of the property rights of the employer.”

Rothbard was “about as fringe as you could be and still be a tenured professor,” said Bryan Caplan, an economics professor at George Mason University, who met him twice.

If someone was a follower of Rothbard, Caplan told ProPublica, “instead of thinking of discrimination as a rampant problem, they would say the free market would take care of it.”

Less than a week after the debate, Jackson posted on Facebook that her foundation “supports all victims of power abusers,” but labeled Trump’s accusers “fake victims.”

Jackson has often collaborated on articles with William Anderson, an associate scholar at the Mises Institute and a professor of economics at Frostburg State University in Maryland. Their work has appeared in the publication Reason and on the website of Llewellyn Rockwell, a co-founder and chairman of the Mises Institute.

Anderson, who told ProPublica that he has known Jackson for years, said that she would likely approach her position at the Education Department from “the standpoint of individual rights and due process.”

After graduating from Pepperdine University’s School of Law in 2002, Jackson also worked for Judicial Watch, a conservative legal advocacy group, for nearly two years as a litigation counsel, according to her LinkedIn page.

In the past few years, she has operated her own law firm. According to a recent biography on her website, her practice specialized in “business, entertainment, and litigation matters,” for a range of clients, “from restaurants to medical clinics, and from authors and musicians to filmmakers and record labels.”

In 2005, Jackson wrote a book on the allegations of sexual misconduct against Bill Clinton, titled “Their Lives: The Women Targeted by the Clinton Machine.” She gained national attention last October after she arranged for several of Bill Clinton’s accusers to attend a presidential debate between Donald Trump and Hillary Clinton. Jackson sat with the women in the front of the audience. A few days before the debate, Jackson established Their Lives Foundation. In registration documents, she described two of its purposes as “giving public voice to victims of women who abuse positions of power” and “advocating for and against candidates for political office.”

Less than a week after the debate, Jackson posted on Facebook that her foundation “supports all victims of power abusers,” but labeled Trump’s accusers “fake victims.” Since the initial announcement of her Education Department role, her Facebook page has been taken offline.