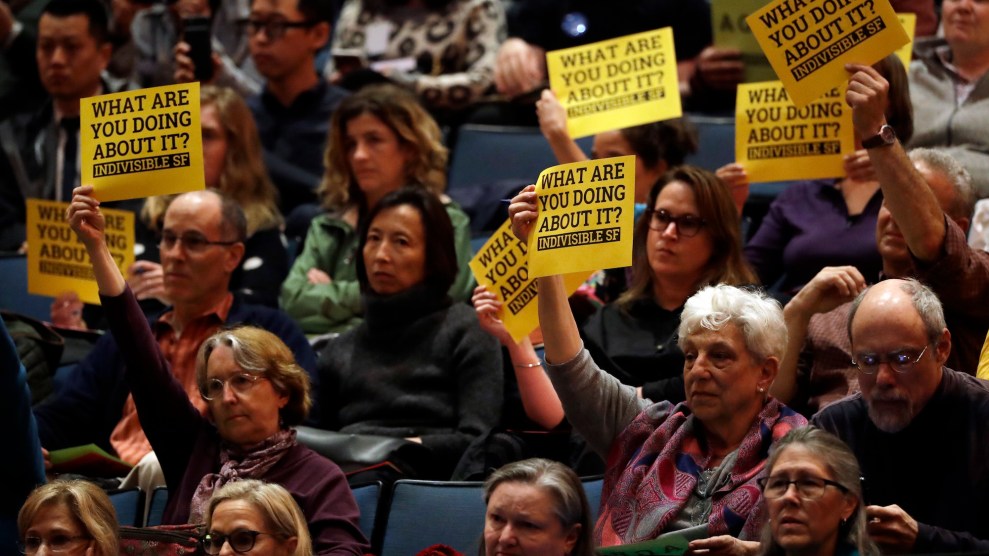 Before they could enter the San Francisco Scottish Rite Masonic Center, the roughly 1,200 people who showed up for California Sen. Dianne Feinstein’s town hall meeting yesterday morning had their bags searched and their bodies scanned for metal objects. As they filed into the thickly carpeted auditorium, attendees passed several tables covered with literature laid out by Indivisible, the liberal grassroots group that had helped organize this rare public meeting with the senator. The leaflets included a list of recommended questions for a senator who doesn’t often field questions from constituents, even here in her liberal hometown.

When the 83-year-old Democrat walked onto the stage in a jet black suit, the crowd, largely women, awarded the four-term senator a warm round of applause. But the mood quickly soured and tension between the famously moderate Feinstein and the highly charged, anti-Trump audience was a motif of the 70-minute event. A man interrupted Feinstein’s opening remarks to loudly ask his fellow audience members to “wake up,” before they shushed him and audibly told him to “shut up.” Feinstein waved it off and plowed forward with a metered explanation of the need to reform Social Security and Medicare before indicating she was ready to take questions.

Questioners were selected at random by raffle. Once called, participants made their way to the front of the auditorium where they stood just a few yards from Feinstein. The first was a woman who was worried that “trigger happy” President Donald Trump might deploy her son to Syria, and wanted to know what Feinstein would do to ensure peace in the Middle East. “The world is not an easy place, and it is not a stable place,” Feinstein replied. She continued, somewhat confusingly, with an explanation of how North Korea presents an “existential” threat and an “acute danger” to the United States. After speaking for some time about the “ruthless” Kim Jong-un’s attempts to build a nuclear tipped missile capable of striking “anywhere in the United States,” Feinstein pivoted back to the Middle East. When she mentioned, without reservation, Trump’s recent missile attack on a Syrian air base, the crowd erupted with a cacophony of boos.

After Feinstein was asked to eschew “business as usual” politics and to vocally resist Trump, the senator tried to explain her model of politics. “I would be surprised if you found too many senators, if any, that have gotten more done,” she said, visibly frustrated by the crowd’s repeated interruptions. “I don’t get there by making statements I can’t deliver. I get there through some caution, some discussion, some smart help, our lawyers—and we generally get where we need to go.”

Feinstein found some common ground with her constituents, however. In her response to a question about Trump’s laundry list of ethical conflicts, she hinted at both impending legislation and litigation targeting the president’s conflicts of interest, which elicited broad agreement from the crowd.

Monday’s town hall was the product of more than two months of work by several dozen Indivisible activists. Several Bay Area Indivisible chapters had expressed interest in holding a town hall with the senator in January. Feinstein didn’t show at a meeting at an Oakland high school in late February. The event was branded as an “Empty Chair Town Hall“ where attendees presented questions to caricature of the senator.

In February, Indivisible members confronted Feinstein at a tony lunch event at the Public Policy Institute of California. Feinstein politely expressed interest in attending a town hall but didn’t commit to a time. After two months of calls and meetings between Indivisible members and Feinstein staffers, two town hall events were announced—this one in San Francisco, and another on Thursday in Los Angeles.

Amelia Cass, one of the leaders of Indivisible East Bay, said the need for a town hall was born out of the senator’s notorious inaccessibility. “It’s our government, and they’ll listen to us if we speak up. There’s a quote I saw in a newspaper that said, ‘It’s not that Senator Feinstein doesn’t want to have town halls; it’s that nobody’s ever asked before.’ She has many opportunities to speak her mind. But her constituents don’t have very many opportunities to speak directly to the senator.”

Many who attended the town hall said they were grateful that the senator took the time to listen to their queries. Yet many left the meeting feeling less than confident that Feinstein is really representing their interests on Capitol Hill. “What we’re saying is that we have an existential threat from our own president, not North Korea,” said Steve Rapport of Indivisible San Francisco. “We want to hear some fighting talk and feel like our representatives have our back.”

That sentiment was echoed by Linh Nguyen, an organizer with Indivisible East Bay. “If [Feinstein] has this coalition that she’s built over the decades that she’s served in the senate working across party lines, I want to see evidence of it,” Nguyen said. “Where is your coalition from the middle and right to push against this? If she does have this large coalition, let us use it to our advantage.”