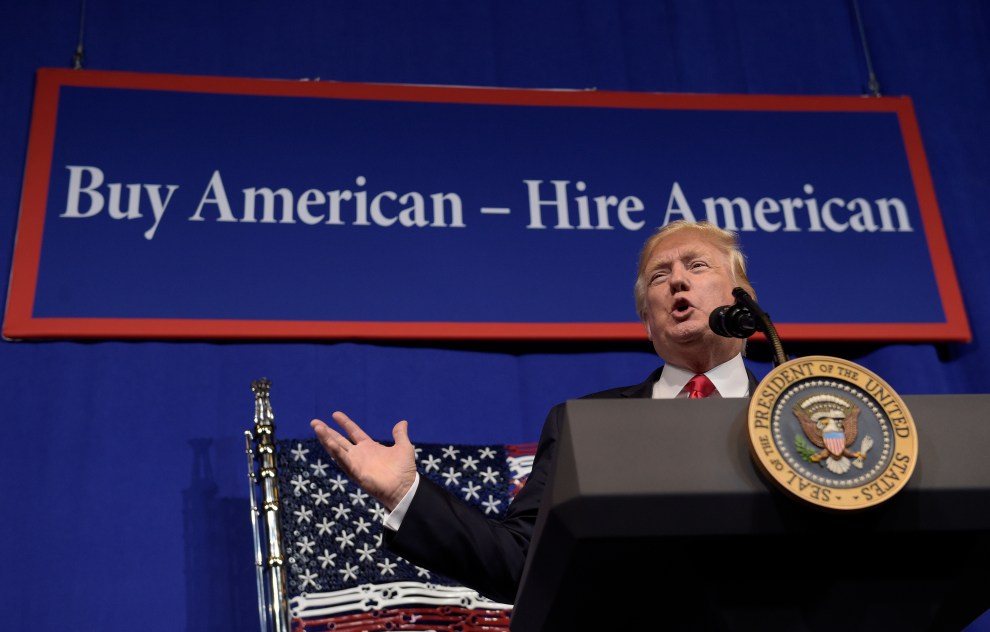 Donald Trump got a higher share of the vote among union members in last year’s election than any Republican presidential candidate since Ronald Reagan, helping propel him to victory in key Rust Belt states and to the White House. Since his inauguration, he has continued to sound populist notes. He signed a “Buy American, Hire American” executive order and promised to renegotiate the North American Free Trade Agreement. He has invited labor leaders to the White House for chummy photo ops, and some have praised him in return.

But beyond these symbolic gestures, Trump’s actual track record on organized labor is quickly moving in the opposite direction. That’s because his greatest impact is likely to come from his high-profile appointments, which appear poised to decimate the power of unions.

Trump’s overtures to unions have so far struck labor advocates as hollow. His Buy American order is vaguely worded and unlikely to have much effect on manufacturing and trade. On NAFTA, his stance has seemed to change several times just in the past few days, and he now says he won’t scrap it “at this time.”

“Those are just sort of optical moves,” says Susan Davis, a labor lawyer who has represented national and local unions. “In terms of substance, every single thing they have done and intend to do is damaging to workers and unions.”

On Thursday, the Senate approved Alex Acosta as secretary of labor, installing a corporate-friendly attorney as unions’ chief regulator. Trump had initially nominated fast-food executive Andy Puzder, who was considered rabidly anti-union, but Puzder lost support even among Republicans amid revelations that he had employed an undocumented housekeeper and the reemergence of old accusations of abuse during his first marriage. Labor advocates worry that Acosta’s Labor Department could come to resemble the one under President George W. Bush, which dedicated more staff and resources to regulating and investigating unions, required them to file more paperwork, and ramped up audits and investigations of unions.

“Every single thing they have done and intend to do is damaging to workers and unions.”

Still, during a stint on the National Labor Relations Board, Acosta occasionally sided with unions. And so it’s unclear how pro-business Acosta’s Labor Department will be. In the immediate future, the biggest challenge to labor is likely to come not from the Labor Department but from the Supreme Court. Trump’s appointment of Neil Gorsuch to the court could deal a major blow to organized labor as soon as the next court term.

Last year, the court heard Friedrichs v. California Teachers Association, which threatened to devastate the labor movement. It concerned public-sector unions, which negotiate contracts with the government on behalf of all employees, whether or not they are union members. Twenty-two states allow these unions to collect so-called agency fees from nonmembers to help pay for their work; otherwise, government employees can benefit from union efforts without paying in and have little incentive to join. But anti-union groups have been fighting this practice, arguing that they violate the rights to free speech and association by forcing nonmembers to pay for political activity they don’t believe in.

The court appeared on track to rule against public-sector unions until Justice Antonin Scalia died suddenly last February. The justices then split 4-4 on the case, preserving the lower court’s ruling in favor of the unions. With Gorsuch now on the court, anti-union groups want a do-over of Friedrichs, and they may get one as early as this fall. A case in Illinois, Janus v. AFSCME, will likely be appealed to the Supreme Court later this spring, and the justices are expected to take the case.

“If unions have to represent people for free, it’s going to decimate public-sector unions,” says Davis. “To say to people, ‘You can get all the services you’re getting for free, or you can pay money’—what we’ve seen in the right-to-work states is a big exodus from membership. And that is going to hinder unions’ ability to function appropriately as a bargaining representative as well as weaken their power in general.”

Finally, Trump is poised to make two appointments to the National Labor Relations Board, which mediates disputes between unions and employers. A list of three finalists obtained by Politico included one potential appointee, Doug Seaton, who is known as a union-buster. As a Minnesota lawyer, Seaton has waged union dissuasion campaigns at several companies in the state and successfully prevented employees from forming unions. Unions have responded in horror. “Worst nominee ever,” says Cohen. He “does not deserve to even be considered, let alone confirmed.”

Under the Obama administration, the NLRB made several decisions that made it easier for workers to unionize. The board is currently considering whether McDonald’s can be held accountable for labor violations at its franchises—a decision that could force fast-food chains to the bargaining table on hot-button issues like wages. Future unionization efforts by drivers for ride-sharing companies like Uber could also come before the NLRB. If Trump succeeds in appointing Seaton or other conservative members to the NLRB, Cohen predicts, “It will become a union-busting agency.”