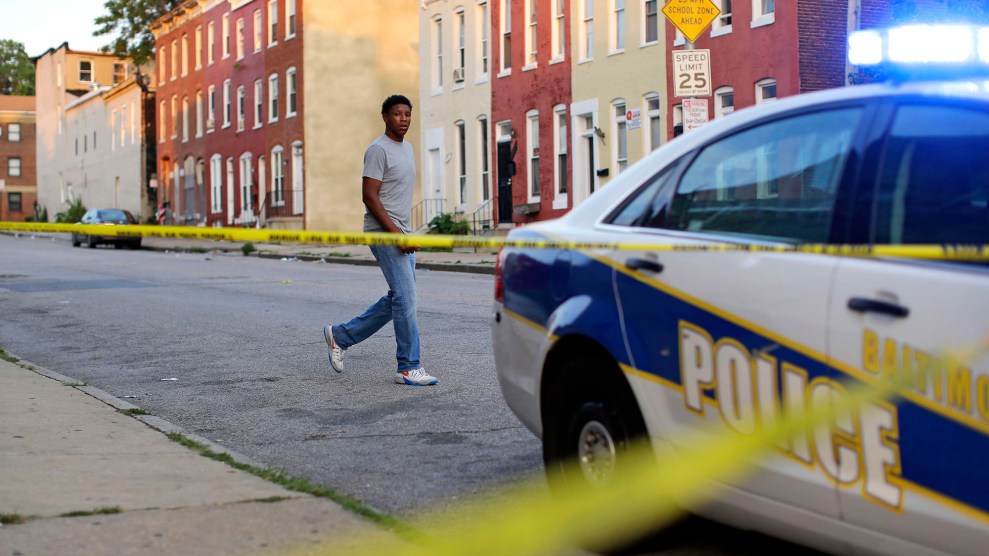 In this July 30, 2015, photo, a man walks past a corner where a victim of a shooting was discovered in Baltimore. Patrick Semansky/AP, File

Despite the opposition of Attorney General Jeff Sessions, a federal judge in Baltimore on Friday locked in place a consent decree between the city’s police force and the Department of Justice. While local officials cheered the order, which seeks to reform the troubled Baltimore Police Department after the Obama Justice Department found widespread unconstitutional and discriminatory practices, Sessions issued a blistering statement predicting that crime would rise as a result.

“I have grave concerns that some provisions of this decree will reduce the lawful powers of the police department and result in a less safe city,” Sessions said. “Make no mistake, Baltimore is facing a violent crime crisis.”

Under Sessions, the Department of Justice has begun to walk back its commitment to federal oversight of police departments with discriminatory patterns or practices, a priority of the Obama administration. Earlier this week, Sessions ordered a review of all consent decrees between police departments and the Justice Department. Department lawyers asked the US district court in Baltimore to put off approving the consent decree for at least 30 days so the new administration could review it.

But in his opinion Friday, US District Judge James Bredar said the time for reviewing the agreement had passed. “The case is no longer in a phase where any party is unilaterally entitled to reconsider the terms of the settlement; the parties are bound to each other by their prior agreement,” Bredar wrote. “The time for negotiating the agreement is over. The only question now is whether the Court needs more time to consider the proposed decree. It does not.” The 227-page consent decree, which places new rules and limits on how officers can interact with the public and mandates training in de-escalation tactics, among other areas of training, will take effect immediately.

Sessions’ statement suggests he is wary of the comprehensive oversight of the city’s police department mandated by the decree. He even appeared to question the allocation of resources for what he described as a “highly paid monitor,” who will ensure the decree’s provisions are met. This puts Sessions at odds with the Baltimore Police Commissioner and the city’s mayor, both of whom are highly supportive of the consent decree and spoke out against a possible delay in implementing it. The decree “will support and, in fact, accelerate many needed reforms in the areas of training, technology, and internal accountability systems,” Commissioner Kevin Davis said in a statement Friday. Despite Sessions fears, as Mother Jones previously reported, a recent study by police reform expert Samuel Walker at the University of Nebraska in Omaha found that consent decrees are largely effective in achieving long-term reforms.

Sessions claimed the agreement had been hastily put together in the final days of the Obama administration—and indeed it was finalized shortly before President Donald Trump was inaugurated. The Justice Department had issued its final report last summer, but Baltimore officials reportedly hurried the final agreement after Trump’s election. This ultimately prevented Sessions from halting its progress.