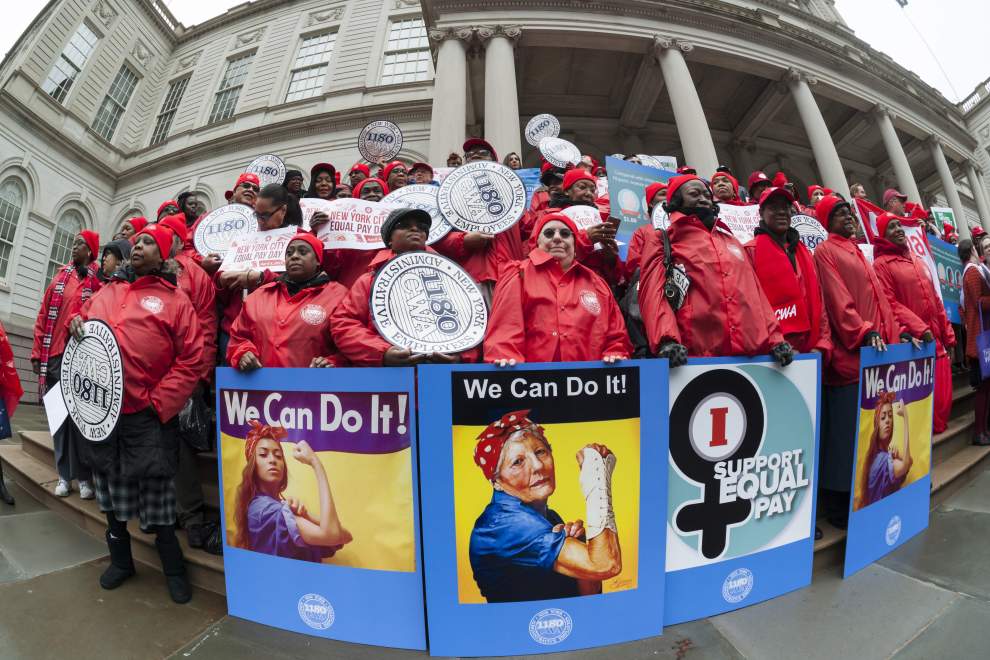 Each year, Equal Pay Day is a grim reminder that working women still don’t earn as much as their male counterparts. In fact, the persistent wage gap means that, on average, women lose a combined $840 billion every year, according to a new report from the National Partnership for Women & Families.

Using Census Bureau data from all 50 states and D.C., the report concluded that the average woman takes home 80 cents for every dollar earned by a man. And the gap is even worse for women of color: black women earn only 63 cents for each dollar picked up by a white male, while Latina women take home a mere 54 cents. Meanwhile, white women bring home 75 cents per dollar earned by a man, and Asian women earn 85 cents, though some Asian subgroups earn considerably less.

Wyoming, where women earn just 64.4 cents for every dollar brought home by a man, is the worst place in the country to earn a paycheck as a woman. New York and Delaware, where women earn 88.7 and 88.5 cents, respectively, are the two states leading the path to wage equity. The map below, created by the National Women’s Law Center, breaks down the gender wage disparities across the country.


The annual losses amount to almost $10,500 for each working woman, according to the National Partnership report. And with over 15 million homes headed by women, the pay gap is hard on families. The money lost from the gap could pay for 1.5 years of food for every working woman and her family, 11 months of rent, or 15 months of child care.

“This analysis shows just how damaging that lost income can be for women and their families, as well as the economy and the businesses that depend on women’s purchasing power,” says National Partnership’s President Debra L. Ness. “Entire communities, states and our country suffer because lawmakers have not done nearly enough to end wage discrimination or advance the fair and family friendly workplace policies that would help erase the wage gap.”

During the 2016 Republican National Convention, Ivanka Trump famously championed President Trump’s support of women’s equal paychecks: “He will fight for equal pay for equal work, and I will fight for this, too, right alongside of him.” Despite Ivanka’s inclusion of women’s equality in the workplace as a key message of her platform, the Trump administration has not actually adopted any of her pledges. Instead, last month President Trump reduced paycheck transparency and rescinded other Obama-era workplace protections enshrined in the 2014 Fair Pay and Safe Workplaces order, imperiling women’s overall ability to track the widening gap between men and women’s paychecks.