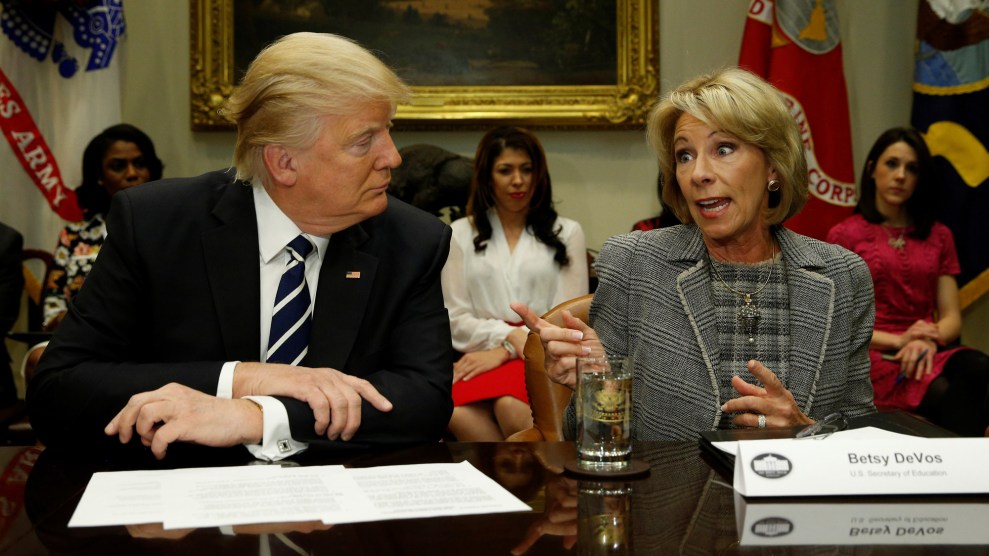 In one of his less-heralded campaign promises, Donald Trump vowed to work with Congress to introduce something called the School Choice and Education Opportunity Act in his first 100 days in office. The expansive piece of legislation would send taxpayer money to private and religious schools, get rid of Common Core standards, expand vocational education, and make college more affordable.

So far, a bill has failed to materialize. Instead, the beginning of the Betsy DeVos era has been marked by decisions that could hurt low-income college students and students from marginalized communities, strip rules on accountability for states, and slash the Department of Education’s budget. And Wednesday, Trump signed an executive order directing an Education Department task force to evaluate regulations from previous administrations for federal overreach—even as the administration devises a way to direct public dollars toward funding private schools.

Here’s a look at what Trump and DeVos have tackled in their first 100 days.

On February 22, the White House reversed an Obama-era directive allowing transgender students to use bathrooms that aligned with their gender identity. While the Obama administration determined last May that stopping transgender students from doing so amounted to discrimination and violated Title IX, the Trump administration’s position leaves the decision to accommodate students to states and school boards.

The move served as one of the first tests for DeVos, who had been recently become education secretary after a contentious confirmation process. Despite her initial opposition, DeVos eventually agreed to side with the president and Attorney General Jeff Sessions in signing off on the directive, the New York Times reported at the time. Following the White House’s decision, 11 states that had challenged the Obama administration’s stance in court dropped their lawsuit.

Black History Month wasn’t so good for the White House. After a listening session with leaders from historically black colleges and universities, DeVos issued a controversial statement that referred to HBCUs as the “real pioneers when it comes to school choice,” despite the fact that those institutions arose because black Americans were excluded from traditionally white universities thanks to state-sanctioned segregation. DeVos corrected herself at a HBCU luncheon the following day amid a flurry of criticism. “Bucking [the] status quo, and providing an alternative option to students denied the right to attend a quality school, is the legacy of HBCUs,” DeVos told leaders.

And, despite insisting that his support for historically black colleges and universities would far surpass that of his predecessors, Trump signed an HBCU-related executive order on February 28 that didn’t stray from the norm. The directive moved a White House initiative on HBCUs to the president’s executive office and stated the initiative should work with the private sector to strengthen historically black colleges and universities. But the order didn’t include a commitment to boost federal funding—a request HBCU leaders are still hoping for.

In his first address to Congress in February, Trump called for a bill to fund “school choice for disadvantaged youth.” On March 16, the administration requested $1.4 billion more for expanding charter schools and vouchers for private schools in its proposed 2017-18 budget. That included a $168 million increase for charters, $250 million for a private school choice program, and a $1 billion increase for Title I funding, which goes toward funding school districts with high percentages of poor children. All told, the administration’s investment would go toward adopting a system that allows money to follow students to the school of their choice, a politically charged policy known as portability.

Under the proposed budget, the Education Department would face $9.2 billion in cuts and would eliminate the Supporting Effective Instruction State Grants, which supports teacher training; the 21st Century Community Learning Centers program, which provides afterschool and summer programs to kids; and the Federal Supplemental Educational Opportunity Grant program, which helps low-income college students pay for school. It would also reduce funding for federal work-study and the Pell Grant program, which provides financial support for low-income college students, by $3.9 billion.

On March 16, the Education Department tossed out another Obama-era directive that had forbid debt collectors from charging fees for up to 16 percent of the principal and accrued interest owed on overdue student loans. The measure was meant to protect students in default of federal loans participating in the Federal Family Education Loan Program.

Late last November, the Obama administration finalized rules on how states should evaluate schools when devising their accountability plans under the Every Student Succeeds Act (ESSA). The 2015 law, which replaced No Child Left Behind, shifted more authority over testing and accountability to states and school districts and restricted the education secretary’s power to dictate the standards adopted by states.

Trump signed a bill to scrap the accountability rules on March 27, less than a month before the deadline for states to submit their ESSA plans. Critics argued that the changes would cause confusion over whether the state plans would comply with ESSA.

On March 27, Trump signed a separate bill eliminating a more controversial Obama-era rule that required states to rate and evaluate the effectiveness of training programs for elementary- and secondary-school teachers. The rule, put in place late last year, drew opposition from colleges, teachers’ unions, and lawmakers who saw the guidance as federal overreach

On March 29, the Education Department discontinued a $12 million grant program meant to help school districts make plans for boosting socioeconomic diversity in schools. The grant program, announced by former Education Secretary John B. King Jr. late last year, was seen by advocates as a symbol of the Obama administration’s commitment to diversity in schools. In an interview with the Washington Post, former Education Department official Tonya Clay House called the move a “slap in the face.”

The previous memos required the Education Department’s Federal Student Aid office, which handles $1.1 trillion in student loan debt, to establish financial incentives for loan serving companies to assist people at risk of defaulting on loans and devise contracts that could punish companies that provide inadequate services. DeVos argued that the rollout process was riddled with shortcomings and that the department should find a way to provide high-quality service and increase accountability while “also limiting the cost to taxpayers.”

The Department of Education is in the middle of negotiating new debt collection contracts, which are set to expire in 2019. Earlier this year, the US Consumer Financial Protection Bureau and attorneys general in Illinois and Washington sued Navient, the nation’s biggest student loan servicer, for allegedly mishandling loan payments and “systematically and illegally failing borrowers at every stage of repayment.”

Nearly two dozen state attorneys general criticized DeVos this week and called for her to reconsider the department’s position. “The Department’s decision to roll back essential protections,” the coalition of attorneys general note in the letter, “imperils millions of student loan borrowers and families.”