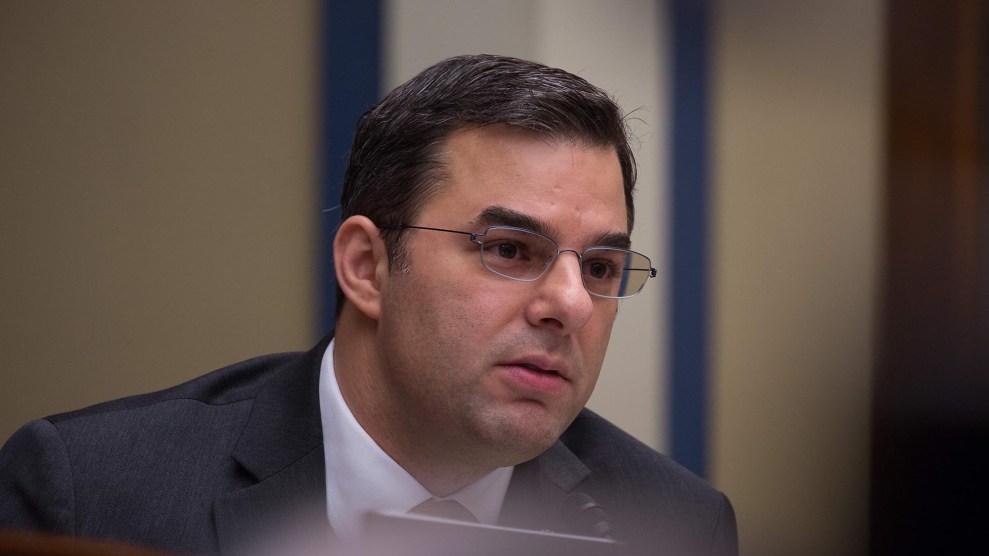 For the first time, Republican members of Congress have gone on record suggesting that one of the scandals engulfing President Donald Trump could be an impeachable offense. Rep. Justin Amash (R-Mich.) said Wednesday that if Trump did indeed ask former FBI Director James Comey to drop the bureau’s investigation into former National Security Adviser Michael Flynn, then that would constitute grounds for impeachment, according to the Hill’s Cristina Marcos.

If the allegations in Comey memo are true, are they grounds for impeachment?@justinamash: “Yes.”

Amash’s comments follow Tuesday night’s bombshell New York Times report that in a private February meeting with Comey in the Oval Office, Trump allegedly told the then-FBI chief: “I hope you can see your way clear to letting this go, to letting Flynn go.” Comey, according to the Times’ sources, was uncomfortable with the exchange and documented it in a contemporaneous memo that he shared with just a few senior FBI and Department of Justice officials. Comey reportedly produced a series of memos detailing his various interactions with Trump.

The White House has denied that Trump asked Comey to end the Flynn investigation. Amash told reporters Wednesday that he thinks “it’s pretty clear” that he has more confidence in Comey than he has in Trump, according to Marcos.

Amash was actually the second Republican lawmaker to suggest that Trump’s alleged effort to shut down the Flynn probe could be an impeachable offense. “Any effort to stop the federal government from conducting an investigation, any effort to dissuade federal agents from proceeding with an investigation, is very serious and could be construed as obstruction of justice,” said Rep. Carlos Curbelo (R-Fla.) on CNN Tuesday night. He added, “Obstruction of justice—in the case of Nixon, in the case of Clinton in the late 90s—has been considered an impeachable offense.”*

Other Republicans have voiced significant concern with what Trump allegedly did. Sen. John McCain (R-Ariz.) said Tuesday night that the situation was “reaching the point where it’s of Watergate size and scale.” Rep. Jason Chaffetz (R-Utah), who chairs the House oversight committee, said in a Tuesday night tweet that he has his “subpoena pen ready” and was asking the administration to turn over the Comey memos. Rep. Tom Cole (R-Okla.), said he’s “no Comey fan” but added, “I won’t defend anyone who obstructs justice.”

Amash’s statements come the same day that Democratic Rep. Al Green (Texas) called for Trump’s impeachment during a speech on the House floor:

Rep. Al Green (D-TX) on the House floor calls for President Trump to be impeached pic.twitter.com/yi1oPizkyI

* Correction: Due to an editing error, this article previously stated that Amash was the first Republican to suggest that Trump’s alleged actions could be grounds for impeachment. Following publication, a spokeswoman for Curbelo contacted Mother Jones to point out that “Congressman Curbelo was actually the first Republican to mention impeachment.”