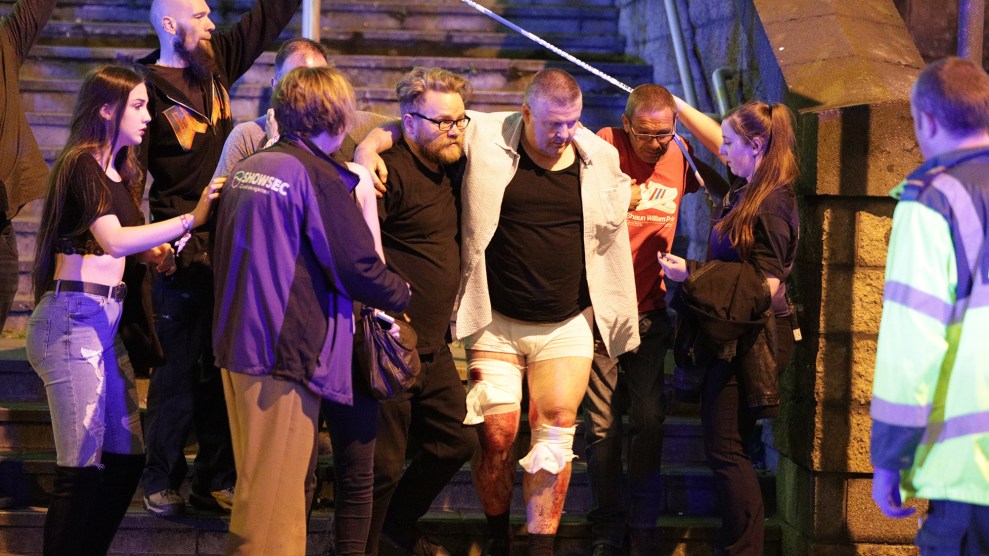 Police and other emergency services are seen near the Manchester Arena after reports of an explosion.Rex Features via AP Images

At least 22 people have been killed and 59 others injured after an explosion rocked Manchester Arena in the United Kingdom, where thousands of fans had flocked to see American pop superstar Ariana Grande.

Police officials said they believed the attack was carried out by one man carrying an “improvised explosive device” who died at the arena. Hours later, authorities also confirmed the arrest of a 23-year-old man in connection to the attack.

With regards to last night’s incident at the Manchester arena, we can confirm we have arrested a 23-year-old man in South Manchester.

“We are working to establish the full details of what is being treated by the police as an appalling terrorist attack,” UK Prime Minister Theresa May said in a statement released around 2:20 a.m. local time.

US law enforcement officials briefed on the rapidly unfolding police investigation in the UK have told several news outlets that early evidence points to a possible suicide bomber outside the venue as the cause of the explosion. US officials said they had no information indicating any current threats against music venues in the US.

Western LEO tells CNN a male at the scene in Manchester has been identified as probable suicide bomber, per @evanperez & @PamelaBrownCNN

If confirmed as an act of terror, it would be the deadliest in the UK since the 2005 bombings of the London subway.

Police first responded to reports of an explosion at the arena around 10:35 p.m. local time. There, they were met with a scene of pandemonium as tactical units and ambulances surrounded the venue. Police are still warning the public to stay away.

Witnesses inside the arena reported a loud bang and then mayhem as concert-goers attempted to flee.

The venue said via Twitter that the incident occurred “in a public space” while fans were just leaving the concert:

UK police: “A number of fatalities” after reports of an explosion at Ariana Grande concert. https://t.co/RgYcXGZ7q6

The arena holds around 20,000 fans, there to see Grande, who is in the midst of her multi-city The Dangerous Woman Tour.

On social media, people have been tagging posts with #roomformanchester to offer room and support for victims of the attack.

This is a developing story and will be updated.