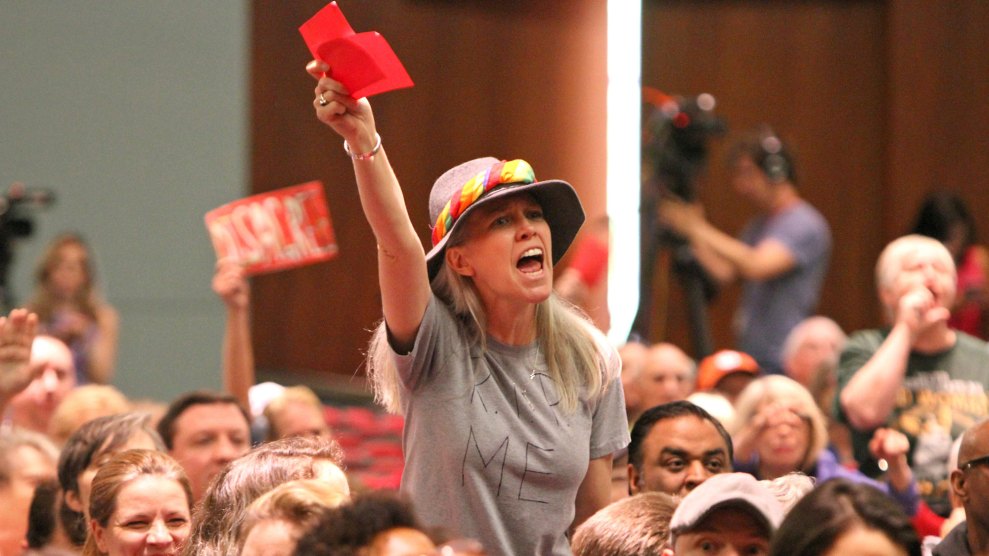 On Monday evening, about 500 residents of New York’s 19th Congressional District gathered at a wedding venue near the Hudson River to ask a local congressman about the American Health Care Act. But the congressman holding the town hall wasn’t the area’s newly elected representative, Republican John Faso, who had voted for the bill. Instead, they heard from Democrat Sean Patrick Maloney, who represents a neighboring district.

Members of Congress don’t often invade each other’s turf without an invitation—and Faso had most certainly not invited his colleague—but Maloney told the attendees he hoped to start a trend. “Let’s just imagine for a minute if in every district in this country where a member of Congress voted for this terrible health care bill [and] they won’t hold a town hall meeting, what if somebody else adopted that district?” he said. “Might be a Democrat! And [then] went in and did what we’re doing doing tonight. What do you think? We can adopt a district anywhere.”

It was a gloves-off affair from there. “He may be upset that I’m in his district, but I will just point out that he is not,” Maloney joked, noting that Faso was at a fundraiser in Albany. “I mean, they say nature abhors a vacuum, right?” Before Maloney began taking questions, he asked attendees to take out their phones and send a mass of tweets to Faso about the town hall. Maloney even brought an empty chair—just in case, he said, Faso decided to show up after all.

“This guy should not be on some milk carton—he’s your congressman,” Maloney said. “He should be here.”

Maloney’s stunt may indeed mark the beginning of a trend. On Tuesday evening, Rep. Ruben Gallego (D-Ariz.) followed suit, appearing at a Tucson high school for a “Rally to Stop Trumpcare” in a district represented by one of its supporters, Republican Martha McSally. Unlike Maloney’s event, which he attended as part of his official duties, Gallego’s town hall was sponsored by the Arizona Democratic Party and more closely resembled a campaign function. McSally, who was not seriously opposed in 2016, is one of 14 Republican “yes” votes in districts won by Hillary Clinton.

“He may be upset that I’m in his district, but I will just point out that he is not,” said Rep. Sean Patrick Maloney.

Wisconsin Democrat Mark Pocan has planned a town hall in House Speaker Paul Ryan’s district. Rep. Seth Moulton, a Massachusetts Democrat and a rising star in the party who was (briefly) floated as a 2020 presidential candidate, has also expressed interest in adopting a district, although he would have to travel a bit further to find one; there are no Republican congressional districts in southern New England. A group in Yolo County, California, has launched a campaign to get local Democratic Rep. John Garamendi to hold a town hall in a neighboring district represented by Republican Tom McClintock, a supporter of the bill. Organizers even included a sample call script to help constituents lobby Garamendi.

The adopt-a-district campaign is a new form of trolling for the Trump age. But it also marks an evolution for the Democratic grassroots, which since January have seized on town halls to put their representatives on the spot, express their anger, and produce viral moments. That was part of the idea behind the Indivisible Guide, a user’s manual for bugging the hell out of Congress, drafted by a group of ex-congressional staffers in December. Indivisible quickly went from a Google Doc to a movement with thousands of registered groups, in every congressional district in the country. It offered a blueprint for badgering congressional offices ahead of key votes and showing up to hassle officials in their own districts.

The problem: Most Republicans aren’t holding town halls, and many of the town halls that are being held require constituents to enter a lottery or present a driver’s license to get in. As Maloney noted, of the 217 Republicans who voted for the House health care bill last week, just 14 have scheduled town halls to talk about it. So the tactics of raising hell had to evolve, too. Indivisible groups have turned the town-hall schedule into a guerilla marketing campaign. They’ve put images of their representatives on milk cartons and cardboard cutouts and put up “missing” posters on telephone poles. In February, the national Indivisible group put out a “Missing Member Toolkit” to encourage local groups to set up their own “citizen” town halls. One of the suggested ideas for giving the events some zest (and legitimacy) if the local representative turned down their invitation was to invite another elected official to the event instead.

What’s happening in Faso’s district neatly illustrates the role these new (and some old) progressive grassroots groups have played in the Democratic Party’s attempts to block President Donald Trump. New York’s 19th District is a sprawling, largely rural swing area that veered hard toward Trump in 2016 after twice voting for Barack Obama. In early February, Indivisible CD-19 held its first big rally, a demonstration and concert outside Faso’s office in Kinderhook followed by a march to the congressman’s home nearby. Faso was not home at the time, but when he arrived 40 minutes later, he came out to speak to the protesters. Among them was a local woman named Andrea Mitchell, who has a brain tumor. She asked Faso if he would protect the Affordable Care Act’s ban on denying insurance on the basis of pre-existing conditions, and when Faso said yes, the two hugged.

But Faso voted for AHCA, and Mitchell—and NY-19 Indivisible—want answers. “I honestly believed after the first vote he wouldn’t repeal it,” Mitchell said in an interview with Rachel Maddow last week. “A lot of my friends and constituents thought that that was very naive of me.” It was Mitchell’s interview with Maddow that first got Maloney thinking about adopting a district, and when he saw that the group’s invitation to Faso to attend the Monday event had gone unanswered, he accepted on Twitter. If Mitchell couldn’t get a straight answer from her congressman, Maloney concluded, he could at least offer one.

Helen Kalla, a spokesperson for the national Indivisible group, said the group is hoping the Maloney and Gallego events are the start of something bigger. “This is going to be a major push over the next several weeks across the country, with what we hope is a huge turnout during the Memorial Day recess in a few weeks,” she said. On Wednesday, the group unveiled a new “toolkit” on how to promote adopt-a-district town halls. Four months after the inauguration, with national Democrats bickering over a big-picture strategy, the cart is still dragging the donkey. And for now, maybe that’s not such a bad thing.