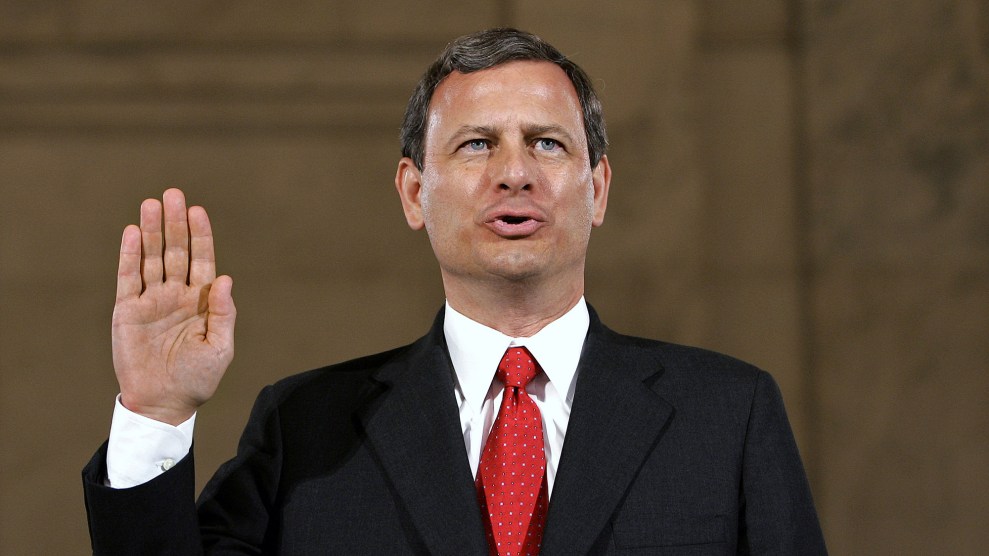 John Roberts is sworn in for his confirmation hearing on Sept. 5, 2005. Pablo Martinez Monsivais/AP

On June 25, 2013, the Supreme Court killed the core provision of the Voting Rights Act. Four years later, it may be coming back from the dead.

Before Shelby County v. Holder, the 2013 case, the 1965 Voting Rights Act barred nine states with a history of discrimination against minority voters, and portions of six others, from passing new voting laws without federal approval. The court’s 5-4 decision, written by Chief Justice John Roberts, found that the formula for determining which jurisdictions needed approval—or “preclearance”—was outdated and therefore unconstitutional.

“Coverage today is based on decades-old data and eradicated practices,” Roberts wrote, and “‘current burdens’ must be justified by ‘current needs.'” In other words, states couldn’t be subject to preclearance based on the pervasive discrimination of the Jim Crow era, which Roberts wrote was now firmly in the past. Implicit in that ruling was the idea that states could be brought back under preclearance if they showed new evidence of discrimination. The law contains a provision specifically for that purpose, allowing courts to place jurisdictions under preclearance if they demonstrate intentional discrimination.

Freed by the court’s ruling from oversight for the first time in decades, many of the formerly constrained state and local governments quickly began imposing new restrictions on voting. But by passing measures that curtail voting by minorities, these jurisdictions are essentially calling Roberts’ bluff—and could force the Supreme Court to consider restoring preclearance.

Texas is the likeliest setting for the return of preclearance. In the last two months, federal courts have three times ruled that the state intentionally discriminated against minority voters. Its 2011 voter ID law and two redistricting maps it drew that year—for the state House and for Congress—were intended to limit the voting power of minorities, the courts found. Plaintiffs in the cases are asking the courts to place Texas back under preclearance. One or more of the cases could reach the Supreme Court as early as its next term. If so, the Roberts Court will have to decide what to do with states that demonstrate that racial discrimination in voting laws is not just a thing of the past.

Implicit in the court’s ruling was the idea that states could be brought back under preclearance if they showed new evidence of discrimination.

“Shelby County said that any preclearance had to be based on current evidence,” says Rick Hasen, an election law expert at the University of California, Irvine School of Law. “And these trials are based on current evidence, not based on something that happened in the 1960s. And so one way of reading this is that the courts are being faithful to what the Supreme Court said in Shelby County, which is that in order to have the extraordinary remedy of preclearance, you need to show that there is a current problem with intentional race discrimination. That’s exactly what’s at stake in these cases.”

In 2010, a conservative backlash to President Barack Obama put Republicans in charge of legislatures and governorships across the country. They quickly passed new voter ID requirements, restrictions on early voting and same-day registration, and other measures that have been found to reduce voting among minorities, the poor, young people, and the elderly. According to the Brennan Center for Justice, by the time of the 2012 elections, 19 states had passed 25 restrictive voting laws.

Fourteen of those laws were blocked by the courts or the Justice Department under the Voting Rights Act’s preclearance rule, and the torrent of voting restrictions began to slow. Shelby changed that. It set in motion a new wave of voter suppression laws across the country. Weeks after the court’s ruling, for example, North Carolina passed a voter suppression bill that the 4th Circuit Court of Appeals, in striking it down, called “the most restrictive voting law North Carolina has seen since the era of Jim Crow,” targeting “African Americans with almost surgical precision.”

No state moved more quickly than Texas to implement a wish list of election reforms that had been blocked under preclearance. Hours after the court’s decision, the state’s attorney general, Gregg Abbott, announced, “With today’s decision, the state’s voter ID law will take effect immediately.” The next day, Gov. Rick Perry signed into law maps for congressional and state Legislature districts that were based on the ones that had been struck down by a federal court under preclearance in 2012 as deliberately discriminatory against minority voters.

Those moves have not fared well in the courts. In April, a federal judge in Corpus Christi ruled that the voter ID law was passed with discriminatory intent. In the past two months, a federal court in San Antonio found both the congressional and the statehouse maps from 2011 intentionally discriminatory. In July, a federal court will determine whether the maps Texas adopted after Shelby are also discriminatory; that case could result in court-drawn maps for the 2018 elections. The string of rulings might lead the courts to reimpose preclearance on Texas. After all, preclearance was intended to target repeat offenders so that the courts wouldn’t be left playing whack-a-mole to strike down discriminatory measures every time they emerged.

“You see the consequence of not having preclearance,” says Mark Gaber, an attorney on the plaintiffs’ legal team in the redistricting cases. “It’s 2017 and we’re still having to litigate about something that happened in 2011.” He adds, “In that period of time, we’ve now gone through three election cycles under maps that quite clearly are—the court’s going to find to be discriminatory.”

No state moved more quickly than Texas to implement a wish list of election reforms that had been blocked under preclearance.

Any court that finds intentional discrimination could put Texas back under preclearance for up to 10 years. The courts can decide what types of election laws, if not all of them, would be subject to federal approval.

Wendy Weiser of the Brennan Center, who is part of the plaintiffs’ litigation team in the Texas voter ID case, says there’s a “reasonable chance” that one or more of the Texas cases will result in Texas being placed under preclearance. “The thing that persuades me that this is more likely than not is…the existence of multiple findings of discrimination in the state during this period,” she says. “So it really feels quite widespread.” Hasen concurs that there’s “a fair chance” that at least one of the Texas cases will result in preclearance. Texas would almost certainly appeal a preclearance order, putting the ultimate decision before the Supreme Court.

Texas is not the only place facing the potential return of preclearance. In the days and months after Shelby, Alabama and Mississippi enacted voter ID laws that had previously been held up by preclearance. North Carolina has stood out for the sheer number of voting bills Republicans have passed to preserve their power, including a redistricting map currently before the Supreme Court and a voter ID bill on which it could also rule. At least two cities have already been placed under preclearance in the aftermath of Shelby: Evergreen, Alabama, for gerrymandering its city council districts to produce a majority-white council in a city that is 62 percent African American, and Pasadena, Texas, which also restructured its city council to reduce the power of Hispanic voters. Pasadena is appealing that decision. But if a court places Texas under preclearance, it would mark the return on a much bigger level of a policy thought to be all but dead.