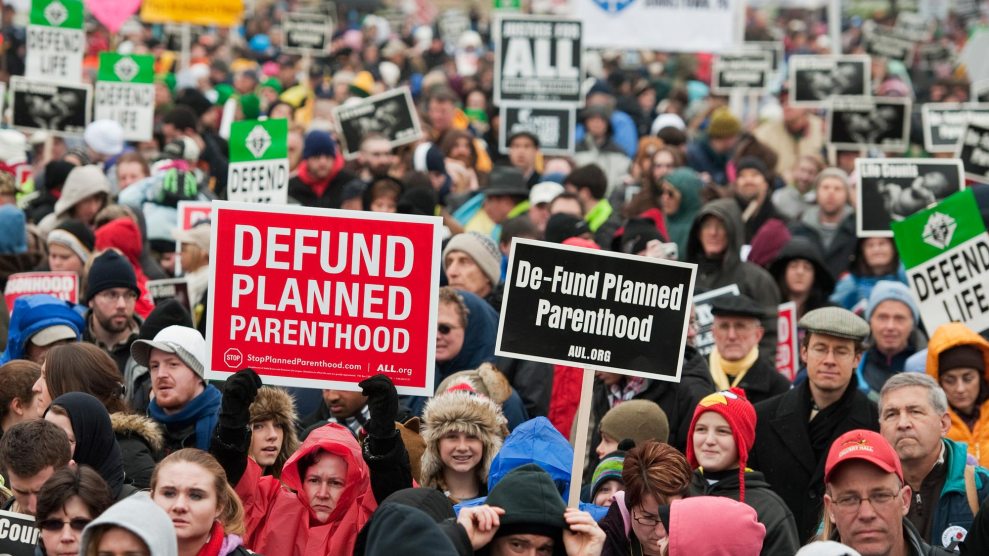 In an unprecedented move, the White House is set to release a budget proposal that would withhold all federal funds from abortion providers, including Planned Parenthood. The impact would be far-reaching. Federal funds are already prohibited from being used to pay for most abortions; the new proposal, if approved by Congress, would bar health care providers around the country from receiving federal support for things like STD treatment, cancer screenings, and even Zika prevention—if they also happen to provide abortions.

The Trump administration is slated to issue its full 2018 budget request on Tuesday morning, but documents circulated on Monday give a glimpse of what the administration has planned. The budget’s executive summary proposes that “certain entities that provide abortions, including Planned Parenthood,” be excluded from receiving any federal funds from the Department of Health and Human Services through Medicaid and other health programs.

In practice, this will mean that Planned Parenthood and other entities that provide abortions would suddenly be excluded from participating in the full array of federally funded health programs, even though it is already illegal for federal money to pay for most abortions, thanks to the Hyde amendment. This includes Medicaid—low-income patients would be unable to use their Medicaid coverage for non-abortion care at Planned Parenthood clinics. It includes Title X family planning grants, which help fund reproductive health care around the country. It includes Violence Against Women Act grants aimed at sexual assault prevention and Centers for Disease Control grants intended to help prevent breast and cervical cancer. It even includes CDC funding for prevention and education efforts relating to Zika virus, which causes severe birth defects.

In 2015, 43 percent of Planned Parenthood’s revenue came from government health services grants and Medicaid reimbursement. About 60 percent of the organization’s 2.5 million patients rely on Medicaid or Title X to pay for their care at Planned Parenthood facilities. Under the administration’s budget proposal, all of these patients would have to find somewhere else to get their care.

The budget blueprint also proposes spending cuts and eligibility restrictions on social services aimed at helping families and low-income parents, including food stamps, temporary assistance for needy families, the Earned Income Tax Credit, and the Child Tax Credit. The proposal also includes six weeks of paid leave for new mothers and fathers following the birth or adoption of a child. The summary does not include full details of the program, but it says that the leave program will be funded via unemployment insurance and that states will each work out leave specifics for themselves.

The budget “guts programs designed to help women and their families put food on the table, get the medical care they need, and make ends meet,” said Dawn Laguens, the executive vice president of Planned Parenthood Federation of America. “From day one, women’s health has been squarely in the crosshairs of this administration. If passed, this budget would undo decades of progress for women when it comes to their ability to access health care, their economic advancement, and their ability to lead safe, productive lives.”