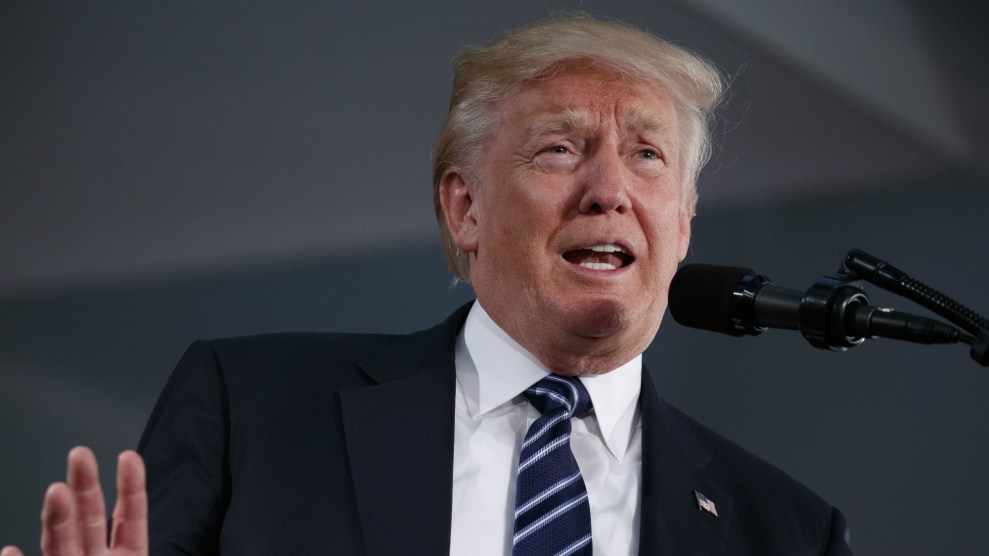 Since Donald Trump became a presidential candidate, journalists and investigators looking at his business holdings have wondered if there are any Russian connections to the complicated and opaque finances of his real estate empire. So far, no solid evidence of a Moscow link has emerged. But on Wednesday a group of House Democrats took a significant step on this front. They sent a letter to German banking giant Deutsche Bank asking for information regarding the four large loans Trump has received from the bank. In particular, the lawmakers are looking for information indicating whether the Russian government guaranteed any of the Trump loans or if these transactions “were in any way connected to Russia.”

According to financial disclosures made by Trump during the campaign, he owes more than $714 million to several banks. But his biggest lender—by far—is Deutsche Bank, which has provided Trump at least $364 million in financing. Deutsche Bank has regularly clashed with US regulators in recent years, and it is currently under investigation by the Department of Justice for its role in a 2011 scheme to allegedly launder money out of Russia using a complex system of what are known as “mirror trades.” Given that Trump now oversees the Department of Justice, his loans with the German bank are one of his most glaring conflicts of interest.

In February, the Guardian reported that sometime after Trump launched his bid for the presidency, Deutsche Bank undertook a review of Trump’s business with the bank. The review, which has not been made public, reportedly did not find a link to Russia. But the Democrats want to see that review to make sure. Their letter, which was sent to Deutsche Bank’s American CEO, asks for a copy of the review and related documents.

In the 1990s, as Trump struggled with assorted bankruptcies, his relationship with many Wall Street banks deteriorated. Deutsche Bank remained one of the few major banks willing to lend him money. In 2005, he borrowed $640 million from Deutsche Bank to fund the construction of his Chicago tower, but when the 2008 financial crisis hit, this partnership turned rocky. In November 2008, just as he was about to miss a payment on the loan, Trump sued Deutsche Bank for more than $3 billion, arguing that the bank’s actions on the world market had led to the financial collapse that had hurt Trump’s real estate business. The bank, in turn, counter-sued, demanding that Trump pay back the $40 million he had personally guaranteed on the loan. The dispute lingered in court for several years before finally being settled. Oddly, Trump subsequently worked out four new hefty loans with Deutsche Bank: one for that Chicago tower; two loans totaling $125 million to finance his purchase of the Doral National golf course in Miami; and a $170 million loan for renovating Trump’s new hotel in Washington, DC. The loan for the Washington hotel was issued in August 2015, a couple months after Trump entered the presidential race.

“At a time when nearly all other financial institutions refused to lend to Trump after his businesses repeatedly declared bankruptcy, Deutsche Bank continued to do so—even after the President sued the Bank and defaulted on a prior loan from the Bank—to the point where his companies now owe your institution an estimated $340 million,” the Democratic lawmakers stated in their letter to Deutsche Bank. “Only with full disclosure can the American public determine the extent of the President’s financial ties to Russia and any impact such ties may have on his policy decisions.”

In the letter, the House Democrats also asked for the bank’s records regarding a 2011 internal investigation of its “mirror trading” operation in Moscow. According to a New Yorker report last summer, between 2011 and 2015, Deutsche Bank employees in Moscow used a complicated trading procedure to help move as much as $10 billion out of Russia, possibly to help wealthy Russians evade sanctions imposed on the Putin regime.

The five Democrats who signed the letter are Reps. Maxine Waters (Calif.), the senior Democrat on the House Financial Services committee, Daniel Kildee (Mich.), Gwen Moore (Wis.), Al Green (Texas), and Ed Perlmutter (Colo.). A spokeswoman for Deutsche Bank did not respond to a request for comment regarding the Democrats’ inquiry.

A full copy of the letter is below.