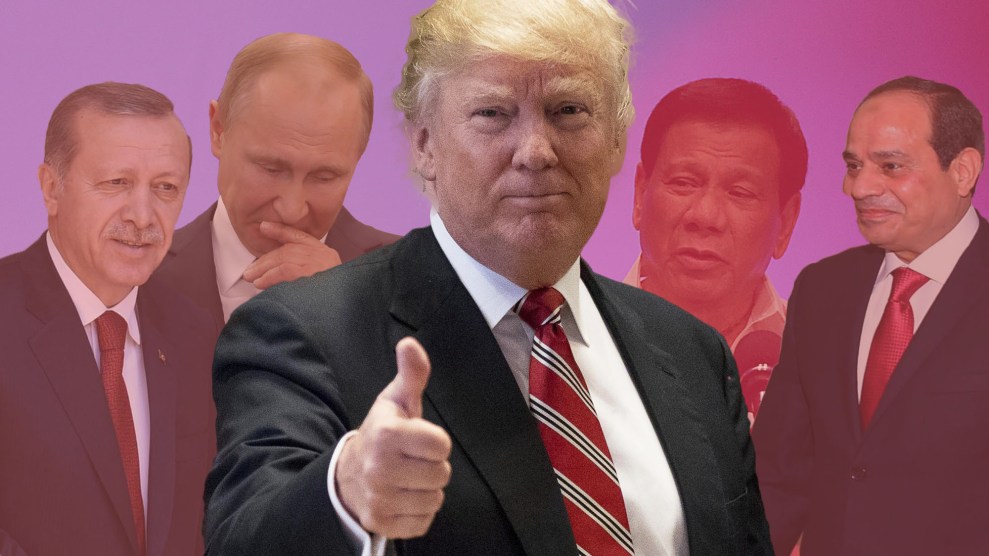 On Saturday, President Donald Trump had what the White House described as a “very friendly” chat with Rodrigo Duterte, the authoritarian leader of the Philippines who has encouraged the extrajudicial killing of thousands of drug suspects and who has acknowledged he personally murdered suspected criminals when he was the mayor of Davao City. Last fall, Duterte compared himself to Hitler and said he was prepared to “slaughter” 3 million drug addicts in his country.

The White House statement about the phone call, which noted that Trump had invited Duterte to visit him at 1600 Pennsylvania Avenue, suggested that Trump had said nothing to Duterte about his abysmal human rights record. This was not surprising, because Trump and his advisers have generally avoided references to human rights when dealing with overseas matters. (Trump recently congratulated Turkish President Recep Tayyip Erdogan for winning a referendum granting him greater powers in an election decried by international monitors as unfair.) And in an act that seems to symbolize Trump’s attitude toward human rights, his White House has erased “human rights” from a high-level position previously dedicated to advancing human rights around the world.

The White House used to have a senior National Security Council post called “special assistant to the president for multilateral affairs and human rights.” This staffer coordinated, developed, and helped implement government policy related to human rights and humanitarian relief. This included a host of matters, including refugee assistance, human trafficking, and the law of war (think drones, Guantanamo, and torture). A main responsibility was, of course, pushing for human rights abroad—not always an easy task when doing so might clash with other priorities of an administration. One of this position’s more prominent occupants in recent years was Samantha Power, a human rights advocate who won a Pulitzer Prize for a book on how US policy has responded to genocide. She was appointed to the position by President Barack Obama in 2009 and then later tapped to be his ambassador to the United Nations. (Under President George W. Bush, this NSC job was called “special assistant for democracy, human rights, and international operations.” During the Clinton administration, it was “special assistant for multilateral and humanitarian affairs.”)

Under Trump, the title for this position has been changed to “special assistant for international organizations and alliances.” Note “human rights” has been excised. And the person named to the post by Trump—Garry Hall—has no background in human rights policy.

Hall served in the US Navy for 30 years, rising to become an admiral. He was one of the service’s best helicopter pilots and worked in information operations and psychological warfare during the Afghanistan war. According to his LinkedIn biography, after leaving the Navy he became a consultant for military contractors seeking lucrative government deals. Most recently, he worked for the Spectrum Group, a consulting firm based outside Washington, DC. When he was hired, the company issued a press release boasting that Hall “brings great value to clients developing business with the Navy, Marine Corps and Coast Guard.” The Spectrum Group noted that in his previous position—senior account executive at Siemens Government Technologies—Hall and his team “grew the company’s federal pipeline from $600 million to $7 billion in two years.”

There are no indications in the public record that Hall has any deep interest in human rights. He wrote one column last year for Government Executive calling for more spending on Navy ships and weapon systems. (The publication did not make clear that Hall’s clients would benefit from an expanded Navy budget.)

How did Hall get this senior position in the NSC? Human rights advocates have speculated that Hall has some personal connection to Steve Bannon, Trump’s chief strategist. (Bannon served for seven years in the Navy, starting in 1977.) The White House did not respond to a request for comment (and explanation).

“By all accounts, Hall is a thoughtful and intelligent guy,” says Rob Berschinski, the senior vice president for policy at Human Rights First and a former director for security and human rights at the NSC (serving under Power when she was the special assistant for human rights). “And by all accounts, he has no background in human rights.” He adds, “It has raised eyebrows within the human rights community that the name of the position dropped ‘human rights’ and put in ‘alliances.’ We’re not sure what that means—if there is a fundamental redirection.”

Stephen Pomper, who succeeded Power in the NSC position and held it until the end of the Obama presidency, notes, “The change in the title is not encouraging, but it doesn’t have to be meaningful. That office can do human rights work without it being expressed in the title.”

Pomper points out, “The more salient point is that the Duterte mess underscores how important it is that people in the White House making consequential decisions—like who the president meets with—take human rights sufficiently into consideration. An Oval Office meeting is an important symbol and an important negotiating chip. It is alarming that it seems to have been offered without a lot of thought. It’s creating credibility for a guy who is flouting core human rights principles and corroding rights-respecting governance in his country. And it’s undermining the United States’ credibility as a principled proponent of human rights.”

Whether Trump wants to embrace or ignore human rights in his foreign policy, the NSC has to handle a number of human rights obligations. Each year, the State Department releases a human rights report, and there are numerous laws—including laws related to human trafficking, child soldiers, and US military aid to other governments—that require the administration to issue reports and determinations related to human rights. “All these issues have to have a place to live within the White House,” Berschinki says. “We hope the NSC is appropriately staffed with knowledgeable people who work these issues.”

Yet, as Pomper notes, “Trump has shown that human rights is not a priority for him. So advocating for these issues inside the administration is not going to be easy.”

Duterte is not the only autocrat Trump has cozied up to. He hailed Egyptian President Abdel Fattah el-Sisi for doing “a fantastic job.” He repeatedly has praised Vladimir Putin, dismissing criticism that Putin was a “killer.” His lack of concern with human rights appears to be reflected in the Hall appointment. In Washington, people often say personnel is policy. If that’s true, Trump, with this hire, is sending a clear signal: Human rights are not taken seriously in his White House.