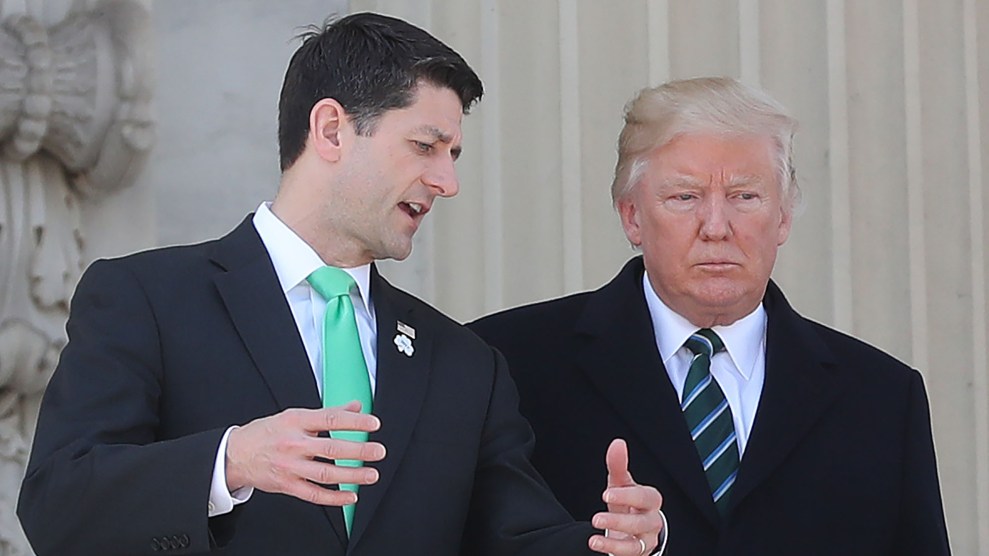 Republicans in the House of Representatives narrowly voted to repeal Obamacare Thursday afternoon, approving a bill that would cut Medicaid funding by 25 percent, allow older Americans to be charged higher health insurance premiums, and scrap all federal funding for Planned Parenthood. It would also allow states to permit insurance companies to charge more for people with preexisting conditions and to choose not to provide a range of benefits, including maternity care and mental health coverage.

The House passed the GOP plan, dubbed the American Health Care Act, by a 217-213 margin, with all but 20 Republicans voting in favor of the law. No Democrats voted for the bill. The bill will now head to the Senate, where a number of Republicans have called for significant changes to the legislation.

When the Congressional Budget Office analyzed an earlier version of the AHCA in March, it found that under the bill, 24 million fewer people would have health insurance than under Obamacare—and that was before Republicans added a provision allowing insurance companies to raise rates on people with preexisting conditions in states that receive a waver. But we still don’t know exactly what impact the bill that just passed the House will have; that’s because Republicans rushed through the vote before the CBO could release estimates of how many people would be insured under the new legislation.

The Republican bill is a hodgepodge of policies overturning Obamacare. It includes the most controversial parts of the original Obamacare repeal bill that Republicans pushed for in March. For example, it would replace the current Obamacare assistance for premiums—which guarantee that lower-income families will only have to devote a certain percentage of their income to buying insurance—with a lower subsidy based strictly on age. It also ends Obamacare’s Medicaid expansion and imposes a cap on all Medicaid funding; those provisions will result in the government spending $880 million less on Medicaid over the next decade, lowering annual Medicaid spending by 25 percent in 2026 and covering 14 million fewer people through that program. The bill also replaces Obamacare’s age restrictions: Current law allows insurance companies to charge older Americans a maximum of three times as much as younger people. Trumpcare would bump that ratio up to 5-to-1, raising the rates for older people who don’t yet qualify for Medicare.

As harsh as they were, those provisions still weren’t enough to win over enough House conservatives in March. So last week, Republicans added an amendment that would allow states to opt out of preexisting-condition protections and requirements for essential benefits coverage. Republicans have claimed that people with medical problems would be taken care of through so-called high-risk pools, but the Republicans’ bill is light on details requiring states to implement those risk-pools and would only devote a small portion of the funding necessary to cover everyone with preexisting conditions.

So, Trumpcare ditches a lot of protections for the poor and the sick. But Republicans still get something they like out of the bill: tax cuts for the rich. The legislation eliminates all of the taxes in Obamacare—totaling more than $1 trillion—which mostly hit the top slice of the wealthy.

The bill now heads to the Senate, where it faces an uncertain future. The same fights between mainline Republicans and hardcore conservatives will play out again, with a number of senators already voicing skepticism of the House plan. And unlike their colleagues in the lower chamber, Republicans will have to deal with another eye-catching number from the CBO about the number of people who will lose insurance under the bill.

A bill — finalized yesterday, has not been scored, amendments not allowed, and 3 hours final debate — should be viewed with caution.