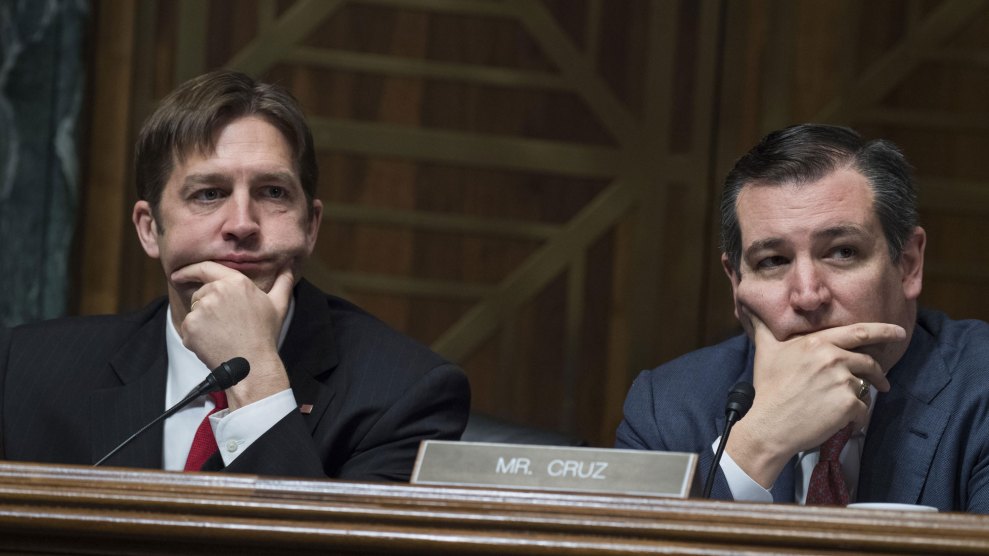 When Nebraska Sen. Ben Sasse was seeking to distinguish himself in a crowded Republican primary field three years ago, he took aim at a familiar punching bag: the Affordable Care Act. In a memorable introductory campaign ad (in which he also proposed moving the Capitol to Nebraska), Sasse said, “Look, Obamacare is arguably the worst law in our history.”

So on Monday, as Senate Republicans deliberated on a secret bill that would repeal the Affordable Care Act, I was surprised to hear Sasse deny he ever said that. Sasse, who I profiled in the magazine last summer, was speaking to KQED radio host Michael Krasny as part of the press tour for his new book, The Vanishing American Adult, a surprise bestseller.

“You’ve gone on record as saying Obamacare or the Affordable Care Act was ‘the worst law in our history,'” Krasny said. So, he wanted to know, “How does taking people’s health care away turn out to be good for neighborhoods and communities?”

“Fair question but let’s pause for just one second,” Sasse said. “You’re attributing a quote to me there that I certainly don’t recognize. This ‘worst law in our history’ stuff that you’re citing, I don’t know what that comes from.”

After Sasse elaborated on his critique of Obamacare—namely that it “exacerbated far more problems than it solved”—Krasny told the senator he had found the quote in Mother Jones.

“I really don’t want to be argumentative, I just want to put on the record: that is not my quote,” Sasse said. “So I don’t know where you’re getting that, but if we are gonna talk about worst laws in American history I’d be talking about racial stuff. So Obamacare as the so-called ‘worst law in American history,’ that’s not from me.”

When mid-interview Krasny’s producer emailed me to fact-check the quote, I sent them a link to the ad, and later in the segment, Krasny rolled the tape. Sasse tried to clarify what he meant.

“So, ‘arguably,'” he said. “[I’m] sort of thinking about this on the fly, but thank you for presenting it. [I] certainly wasn’t meaning to suggest that it was the worst law, absolutely not. That would be Jim Crow, institutionalized racism, or the Fugitive Slave Act. What I’m meaning to suggest is that this is a macro-transformation of our entitlement system and it’s not going to address the problems it’s purporting to tackle.”

Of course it’s not the worst law ever constructed, and of course Sasse, a former Department of Health and Human Services assistant secretary and Yale history PhD, understands that. But it’s not what he told Nebraska conservatives when introducing himself. When people say “arguably” they do not generally mean that the argument is wrong.

And it was hardly a one-time thing. As he sought to brand himself as the conservative leader in a crowded primary, he filmed a Fox News segment in which he filled out a Final Four-style bracket of then-President Barack Obama’s supposed abuse of powers—one of the entries was “death panels.”

As I wrote in my piece, Trumpism is antithetical to Sasse’s identity in many ways—he is an amateur theologian who’s obsessed about the deterioration of political institutions, and his new book has struck a chord among conservatives for precisely those reasons. His public criticisms of Trump, whom he refused to support, have become a big part of his political identity. But his attack on Obamacare, and his floundering response when challenged, is a quick illustration of how even the party’s least Trumpy voices have failed to wrestle with their own contributions to his rise.