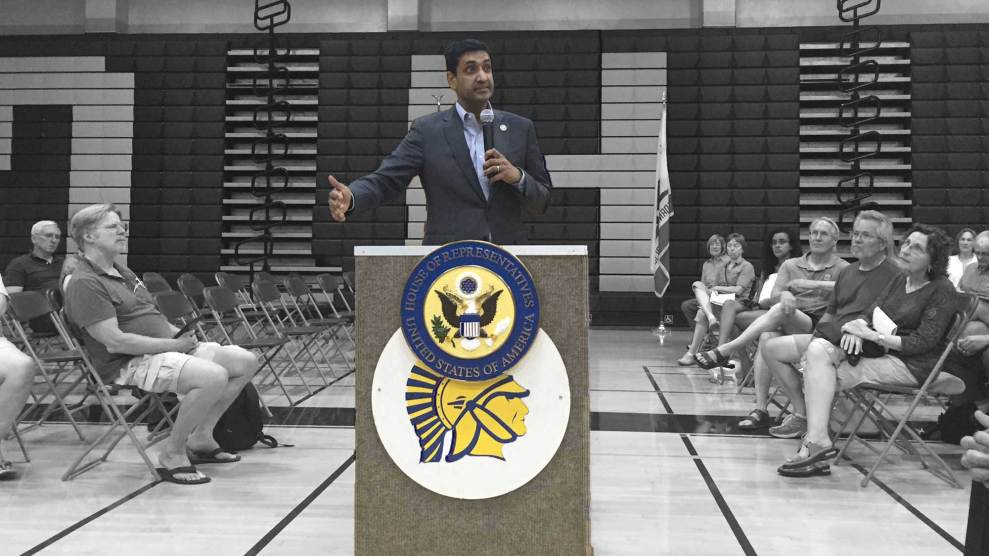 On an unseasonably warm day in June, Silicon Valley’s newest member of Congress held a town hall meeting in the gym of Milpitas High School—home of the Trojans. It was an apt venue for US Rep. Ro Khanna, a Berniecrat of recent vintage who’d pulled his own daring Trojan horse maneuver: He’d established a reputation in his district as a business-friendly centrist, ousted liberal incumbent Rep. Mike Honda in the state’s top-two election system in November with the backing of wealthy techies, and then quickly repositioned himself to Honda’s left. “If Donald Trump thinks we can explore a $3 trillion tax cut for the investor class, we can certainly afford a trillion-dollar raise for the working class,” Khanna proclaimed, drawing hearty applause from a crowd of 150, including a former Honda voter and a Republican wearing a “Ro Khanna” polo.

In many other districts, talk of a $1 trillion, government-funded wage subsidy would be written off as ludicrously socialist. But in Milpitas it now strikes many people as reasonable—a fact that says a lot about both the rapid political evolution of Khanna and of Silicon Valley itself.

Rather than tacking back to the center once in Washington, as his progressive critics had expected, Khanna has continued moving left.

To call Khanna an unlikely progressive hero would be an understatement. A former economics lecturer at Stanford, corporate lawyer, and Department of Commerce appointee, he readily concedes that his background has engendered “a suspicion about me” on the left. In his first bid to unseat Honda, a fellow Democrat, in 2014, he openly courted votes from Republicans and independents with a focus on “job creation” and a mailer highlighting “Mike Honda’s old-school liberal orthodoxy: Big taxes. Big spending.” Khanna did not support taxing most capital gains as regular income—a position that no doubt endeared him to Valley executives, who are often paid in stock options.

Khanna was one of only two Democrats supported that year by Silicon Valley venture capitalist and Republican megadonor Peter Thiel, who wrote him a $2,600 check. He also pulled in large donations from other Republican-friendly tech billionaires such as angel investor Ron Conway and former Facebook President Sean Parker—not to mention employees of the computing goliaths Alphabet and Microsoft. “To a certain extent, I think we are starting to come to a realization of our own power,” Parker said in introducing Khanna at a 2013 fundraiser.

But things didn’t quite work out that way: Khanna narrowly lost. So like any Silicon Valley startup that doesn’t immediately catch on, Khanna pivoted.

“On the campaign trail, I heard a lot of stories about income inequality and stagnant wages,” Khanna told me in an email a few days after the 2014 election. Since then, he has been collecting stories from people he’s met while campaigning. He mentioned an African American family whose daughter had taken off a year from the University of California to work; she couldn’t afford the tuition. “I learned more about poverty in my own district,” he said, “and I learned about the hardships of individuals who were nurses or teachers or firefighters, telling me their stories about how they lived in Silicon Valley and really couldn’t make ends meet, couldn’t afford a house, couldn’t afford the rent, had to move out, couldn’t afford college.”

After his 2014 loss, Khanna also read up on progressive economic theory. He met with the lefty economic thinkers Robert Reich, Paul Krugman, Joseph Stiglitz, and Stephanie Kelton—who argue that the best way to stimulate the economy is from the bottom up, because poor and working-class people actually spend their money rather than hoarding it. The meetings led Khanna to conclude that America needs “a restructuring of the economy,” he told me. “We need an economic policy that is gonna favor the working class, the middle class, and not the investor class.”

In his 2016 rematch against Honda, Khanna dialed back the talk of appealing to Republicans, stressed his support for taxing short-term capital gains as regular income, and even quietly endorsed the presidential campaign of Bernie Sanders. Khanna’s deep-pocketed Silicon Valley supporters didn’t notice or care about his leftward shift; Thiel, Conway, and Parker kept supporting him and were even joined by Republican-leaning venture capitalist Marc Andreessen. Khanna won the district in November with a commanding 61 percent of the vote.

And that’s when things got interesting. Because rather than tacking back to the center once in Washington, as his progressive critics had expected, Khanna has continued moving left. In March he proposed his $1 trillion wage subsidy for the working class: People who earn between $25,000 and $75,000 a year would effectively receive up to a 40 percent raise in the form of annual earned income tax credit (EITC) of $3,000 to $12,000. Early this month, he introduced legislation that would tax wealthy corporations if they do not pay their employees a living wage. And he recently became the first member of Congress to endorse Cenk Uygur’s Justice Democrats, a tea-party-style group dedicated to running progressives against centrist incumbents in Democratic primaries (Khanna told me he is supporting the group to encourage “competitive elections” and has not committed to endorse its candidates.)

To a certain extent, Khanna’s leftward shift makes sense politically; labor unions have been his most powerful adversaries and remain his biggest potential threat in any primary challenge. Yet it’s hard to see his evolution as simply a cold political calculation. His district, which includes parts of Fremont, San Jose, and Cupertino, voted for Hillary Clinton over Bernie Sanders by a 56 to 43 percent margin—a fact that some of Khanna’s constituents remain eager to point out.

Bernie Sanders “had his ass handed to him by Hillary Clinton—he lost—so why is he leading the Democratic Party?” Neema Kharva, the owner of a food packaging business from Santa Clara, asked Khanna at the Milpitas town hall meeting.

“I think the combination of Bernie Sanders’ moral clarity with Silicon Valley’s interest in and understanding of job creation can be a compelling platform for the Democratic Party,” said Khanna.

“He’s leading a strong part of it,” Khanna replied.

“No, he created factions,” Kharva snapped, “and his message is not very cohesive…We have so many things to beat up the Republicans on, and we need to become a lean, mean machine like the GOP is.”

“I agree with that,” Khanna said.

Khanna still feels uneasy about the idea of being a progressive torchbearer—he prefers to think of himself as a bridge between the Democratic Party’s Hillary and Bernie camps. “Obviously, everybody is a reflection of their district,” he told me, “but I think the combination of Bernie Sanders’ moral clarity with Silicon Valley’s interest in and understanding of job creation can be a compelling platform for the Democratic Party.”

The Valley’s reaction to the $1 trillion EITC surprised Khanna for how positive it was—but maybe it shouldn’t have. In fact, an even more radical idea has been batted around in the Valley for several years now: a universal basic income. Since 2014, the tech press has written dozens of stories on the concept. The San Francisco tech incubator Y Combinator began rolling out a UBI pilot project in Oakland early last year and is now giving 100 local families around $1,500 a month, no strings attached. In December, Facebook co-founder Chris Hughes and others launched the Economic Security Project, a $10 million fund aimed at researching and promoting UBI. The group has been endorsed by venture capitalist Vinod Khosla, whose Khosla Ventures has invested heavily in artificial intelligence startups. Silicon Valley sees a need to counteract the negative effects of AI and automation on a blue-collar workforce, says Economic Security Project co-chair Natalie Foster. But “Ro Khanna talking about it is really a first for Congress.”

The Valley’s support of these sorts of redistributive policies could in some ways be seen as self-serving. Khanna is not proposing to pay for wage subsidies with a tax on automated cash registers or self-driving cars; instead, he wants to levy a “financial transaction tax” that would mostly affect high-frequency trading on Wall Street. Yet his approach and others like it have also attracted endorsements from labor leaders such as former Service Employees International Union President Andy Stern and progressive thinkers such as Reich. “We did talk, and I suggested an expansion of the earned income tax credit on a bunch of grounds,” Reich told me. “It’s good economics, it helps people, it is the largest anti-poverty program in the federal government already, and it could reach far more people.”

On other issues near and dear to the Valley, Khanna is far from a lapdog for big tech. He has called for an anti-trust investigation into Amazon’s recent acquisition of Whole Foods, has advocated somewhat tighter controls on H-1B visas, and has spoken out against the practice of Uber and other gig economy apps classifying workers as independent contractors. “I am a technology optimist,” he says, arguing that in the long run tech will “create more jobs and create more opportunities.” But, he adds, “We have to have a plan for how are we going to deal with that transition, so people feel like technology is empowering their lives and not a negative.”

Still, Khanna clearly hasn’t sold everyone on his $1 trillion EITC idea—even within his own district. After he wrapped up his town hall meeting in Milpitas, I asked several attendees for their thoughts on the idea but found myself having to explain it to them. “Can you give me a nutshell what that is about?” asked Ashit Ghevaria, a product manager at a tech company who’d come to the town hall to complain about smells from the local landfill. After I filled him in, he agreed that low-income people “are working hard—they are not begging. Those are honest, sincere people. So considering our cost of living, something must be done.” But he wasn’t ready to sign on to Khanna’s plan just yet. “It’s the whole balance sheet,” he said. “If you are giving to something, you need to take out money from somewhere.”