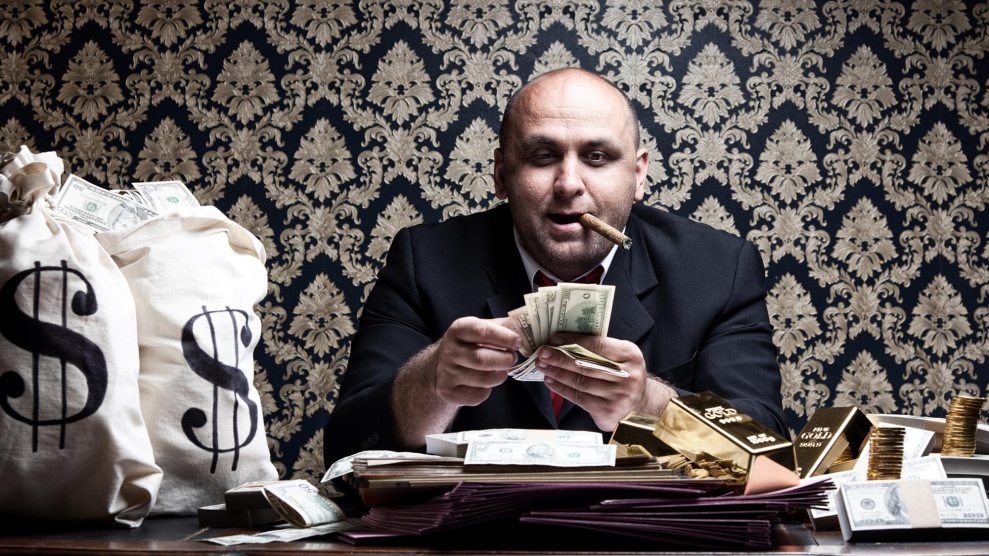 From the earliest days of his campaign, Donald Trump has opposed the Dodd-Frank Wall Street Reform and Consumer Protection Act, the Obama-era financial reform law passed in response to the 2008 financial crisis.  Trump has characterized it as a “disaster” that has created obstacles for the financial sector and hurt growth. In April, he repeated his promise to gut the existing law.

“We’re doing a major elimination of the horrendous Dodd-Frank regulations, keeping some, obviously, but getting rid of many,” Trump said in a meeting with top executives during a “Strategic and Policy CEO Discussion,” which included the leaders of major companies like Walmart and Pepsi. He added, “For the the bankers in the room, they’ll be very happy.”

The Republican Congress shares Trump’s dislike of Dodd-Frank and this week, the House plans to vote on the Financial CHOICE Act, a Dodd-Frank overhaul bill that will, as promised, make banks and Wall Street “very happy” if it becomes law, while undoing numerous financial safeguards for regular Americans. (CHOICE is an acronym for “Creating Hope and Opportunity for Investors, Consumers and Entrepreneurs.”)

The bill, sponsored by Rep. Jeb Hensarling (R-Texas), takes aim at some of Dodd-Frank’s main achievements: It guts rules intended to protect mortgage borrowers and military veterans, and restrict predatory lenders. It also weakens the Consumer Financial Protection Bureau’s ability to oversee and enforce consumer protection laws against banks around the country—upending a mix of powers that have helped the CFPB recover nearly $12 billion for 29 million individuals since opening its doors in July 2011. The bill also weakens or outright cuts a number of bank regulations enacted through Dodd-Frank to keep risky investing behavior in check in order to avoid the economic devastation of another financial crisis or taxpayer-funded bailout.

During an April hearing before the House Financial Services Committee, Sen. Elizabeth Warren gave a fiery speech criticizing the measure. “This is a 589-page insult to working families,” she said. “It would unleash the same behavior on Wall Street that led to the 2008 financial crisis.” Other Democrats have joined Warren in opposing the bill, as have some institutional investors and financial experts.

Concerns that overhauling the financial reform bill could trigger another financial crisis have also been raised by former Massachusetts congressman Barney Frank, one of the chief architects of the original Dodd-Frank act. “Consumers who have dealings with banks and other financial institutions should be very worried about [Dodd-Frank] being abolished,” he said in a February interview. “If you don’t keep the rules we have in place to restrain irresponsible risk-taking, you’ll have, at some point, another crash.”

Rep. Hensarling, who chairs the House Financial Services Committee, has argued that the CHOICE act will protect consumers and particularly smaller financial institutions—like community banks or credit unions—that are weighed down by the costs of complying with Dodd-Frank’s regulatory structure. (FDIC data on community banks contradicts Hensarling’s point: In 2016, community bank earnings grew by $507.9 million from the previous year, and they gave out small business loans at more than twice the rate of noncommunity banks.)

Here’s a glimpse of some of the main ways the Financial CHOICE Act could ease regulation of Wall Street and hurt consumers:

The bill guts the CFPB’s power to crack down on banks: The CFPB was created in the wake of the 2008 financial crisis by the Dodd-Frank act, which gave the agency authority to enforce consumer-protection regulations on banks and Wall Street. The current CHOICE act proposes a reduction in the agency’s authority to enforce these regulations on banks, instead dispersing that power among a mix of federal agencies. This splintered model for consumer protection is similar to what existed before the financial crisis, and proponents of the CFPB have argued that this decentralized approach helped contribute to the crisis.

Gives the White House control over consumer protection: The CHOICE act proposes ending the CFPB’s status as an independent agency whose director is appointed by the president and must be confirmed by the Senate. If the measure becomes law, the White House would have the power to fire the agency’s director without cause; today, the CFPB director can only be removed by the president over a small list of work-related offenses. Additionally, rules made by the agency would require White House review—a constraint that is not imposed on other banking agencies.

Decimates regulation of predatory lenders: The CHOICE Act would eliminate the CFPB’s power to regulate “small-dollar credit,” including “payday loans, vehicle title loans, or other similar loans” with extremely high interest rates that are used by more than 19 million mostly lower income US households to make ends meet when they’re lacking other options. Given the interest, these loans can lead to a cycle of ever-growing debt—the majority of borrowers end up having to take out a second loan to cover the first. The CFPB proposed rules in 2016 that would have curbed abuses by predatory lenders by requiring them to ensure a borrower will be able to make payments on time, and also make repeat lending to the same people more difficult.  The CHOICE Act’s proposal to strip the CFPB of its power to regulate small-dollar credit is “a free pass for payday and title lenders to not be subject to efforts to rein in their abusive practices,” Diane Standaert, executive vice president of the Center for Responsible Lending, told the Los Angeles Times.

Reverses efforts to curb the practice of forced arbitration: Forced arbitration clauses have proliferated in recent years, appearing in consumer contracts for virtually every financial product—bank accounts, credit cards, and more. These clauses prohibit consumers from bringing traditional lawsuits against financial institutions, requiring them to participate in private, often expensive, proceedings outside of the regular court system. The CHOICE Act would remove the CFPB’s authority to restrict forced arbitration, subsequently preventing the agency from finalizing a rule limiting forced arbitration clauses that was expected to go into effect in mid-2017.

Repeals the Volcker Rule: A key component of Dodd-Frank, the Volcker Rule prohibits big banks from participating in certain risky investment activities, in order to prevent them from jeopardizing their solvency by gambling with depositor funds. The bill would repeal that rule, which Wall Street has long complained reduces revenues. In a closed-door meeting last month, Treasury secretary Steve Mnuchin—an alum of Goldman Sachs, one of the banks subject to the Volcker rule—directed five federal agencies to review the Volcker rule with an eye towards easing some of its requirements.

Repeals the fiduciary rule requiring retirement fund managers to work in their client’s best interests: The fiduciary rule enacted by Obama-era Department of Labor elevates asset managers handling retirement savings to “fiduciary” status. This means they are required to place their client’s interests above their own, disclose any potential conflicts of interests, and be transparent about all fees. After attempts to delay its implementation by the Trump administration, the fiduciary rule is set to go into effect on Friday. If it becomes law, this bill would repeal the rule, halting its implementation.

Eases stress tests on big banks: The Federal Reserve requires the largest US banks that are “Too Big to Fail”—meaning their solvency is critical to the broader economy’s health—to undergo an annual stress test measuring the bank’s ability to withstand financial shock. “It’s been a cornerstone of our effort to improve supervision,” Fed Chair Janet Yellen told lawmakers in February. “It’s a key part of our regulatory process.” The Financial CHOICE Act proposes requiring banks to undergo these tests only every two years, and exempts them from the qualitative aspects of the tests, which check on internal bank processes—such as risk-monitoring, loss-modeling, and more—that help protect the bank in the case of an economic shock.

Repealing the government’s ability to restructure a failing financial institution: After the 2008 financial crisis, regulators explained they were unable to liquidate failing banks without throwing the economy into turmoil—hence the need for a taxpayer-funded bailout instead. In response to this, Dodd-Frank created the Orderly Liquidation Authority, which allows the FDIC to take over a failing financial institution and liquidate it using a mix of fees collected in advance from banks as a preemptive credit line for this sort of crisis. The CHOICE Act would repeal the OLA and replace it with a bankruptcy process that is “a reckless gamble with the stability of the US financial system,” according to a letter sent last month to Congress by more than 100 bankruptcy scholars and professors from law schools around the country.

Raising debit and credit card fees: The Durbin Amendment enacted through Dodd-Frank allowed the Fed to set a limit on how much banks can charge consumers and retailers for using debit and credit cards. The amount ended up being about 12 cents per swipe. The Financial CHOICE Act proposes repealing the amendment and raising the cap on what banks can charge. Faced with pushback over this change from many retailers and some of his fellow Republicans, Rep. Hensarling said late last month that he will likely drop this portion of the bill in order to help ensure its passage