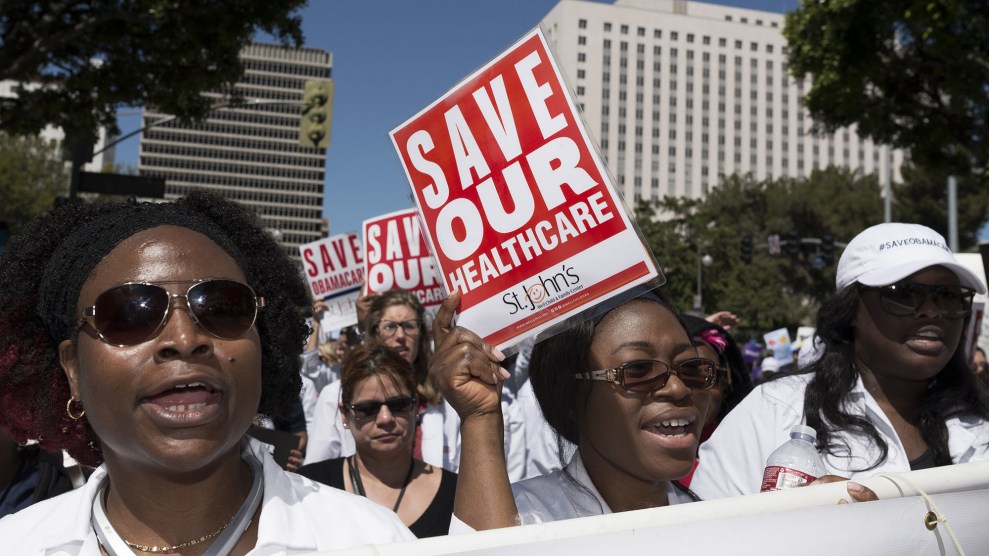 When House Republicans passed a controversial health care bill that would allow states to opt out of Obamacare’s protections for people with preexisting conditions, some GOP lawmakers sought to assure voters that few states would actually take them up on the offer. “It’s very unlikely that any governor of any state will remove the preexisting conditions clause,” Rep. Tom Cole (R-Okla.), a member of the House leadership team, told NPR. Those protections, after all, are one of the most popular parts of the 2010 health care law; 70 percent of Americans oppose the idea of letting states do away with them.

But in interviews with Mother Jones, health care experts warn that Cole is wrong: If the GOP bill becomes law, many states will indeed eliminate preexisting-condition protections and/or at least some of Obamacare’s requirements that insurance plans cover a range of standard treatments, including maternity care and mental health. And it wouldn’t just be states that voted for President Donald Trump. Under the GOP bill, even progressive states might have to take drastic measures to prevent their health insurance markets from exploding.

“Insurers would be putting pressure on states, saying, ‘We can’t operate in this market. We won’t participate at all unless you start rolling back these protections.'”

In order to win over hardcore conservatives in the House, Republican leaders added an amendment to their Obamacare repeal legislation that could have dramatic consequences. The amendment would allow any state to rewrite Obamacare’s “essential health benefits.” States could also end “community rating,” the requirement that insurance companies charge the same premiums in a given area without discriminating against folks with preexisting conditions. If a state waived community rating, insurance companies would still be required to sell insurance policies to sick people, but the insurers could charge whatever price they wanted. The likely result: Insurance would simply become unaffordable for people with expensive medical conditions.

Experts say states would likely face enormous pressure to adopt at least some of the waiver options. In part, that would arise from insurance company lobbying; the industry spent tens of millions lobbying at the federal level in 2016 alone. But the basic market dynamics created by the GOP bill would play a role as well, potentially creating an industry death spiral if states refuse to allow price discrimination based on health conditions. “Insurers would be putting pressure on states, saying, ‘We can’t operate in this market. We won’t participate at all unless you start rolling back these protections,'” says says Edwin Park, vice president for health policy at the liberal-leaning Center on Budget and Policy Priorities.

Insurance companies would face an immediate crunch if the Republican bill became law. The legislation ends Obamacare’s individual mandate this year, removing a major incentive for healthy people to buy insurance. The bill also reduces the amount of money the government offers in subsidies to help lower-income people pay their premiums. With less help from the government, healthy people would have even more reason not to buy insurance.

Before Obamacare, state insurance markets were lightly regulated, with 47 states and the District of Columbia allowing insurers to charge sicker people higher rates. The reason was simple: Unless you compelled healthy people to buy insurance and spent money to help them afford their premiums, there was no way to make premiums affordable while also charging everyone the same rate. The GOP bill would make the math even more daunting, since it would repeal Obamacare’s individual mandate while still requiring companies to sell insurance to anyone who wants it. If insurers can’t charge sick people more under the scenario, they will likely end up charging everyone more, which, in turn, would drive even more healthy people out of the market. That would drive premiums even higher, causing the market to become unsustainable.

“Most carriers—looking at a market where you have to take all comers, and there’s no mandate and there’s much smaller subsidies—most carriers are going to look at that bargain and say this is not a viable market for us unless the state takes up this waiver option,” says Sabrina Corlette, a professor at Georgetown University’s Health Policy Institute.

While insurance companies aren’t fans of many of the Republicans’ other proposed changes, the waiver options are the sort of policy that the industry has generally been asking for, notes Linda Blumberg, a senior fellow in the Health Policy Center at the Urban Institute. “They wanted fewer requirements on benefits. They wanted to design and tailor benefits to particular consumers as they did before. And they wanted to be able to do medical underwriting,” Blumberg says. “So these waivers would be popular with the core, the mass of the industry. It’s how they did business before. It’s how they see that they can keep their costs down.”

“You wouldn’t see all these progressive states going after a waiver in year one, but within a couple of years after that I think you would.”

So far, no governors have rushed forward to say they’d eagerly ditch preexisting-condition protections. Wisconsin Gov. Scott Walker (R) briefly suggested he would take a look at the waiver options, but he immediately walked that back as a backlash began to brew. But even the governors currently saying they would never touch preexisting conditions might find themselves in a different position a few years down the line when insurance companies threaten to leave the state unless lawmakers change the rules and weaken regulations.

“It’s a Hobbesian bargain,” Corlette explains. “Either you are faced with major carriers leaving the market entirely—which means that both healthy and sick people would lose coverage—or taking up these waivers that would almost certainly mean that sicker people lose access to coverage. I think many state-level policymakers will look at that bargain and say, ‘Well, I want at least some people to get coverage, and so we’ll take up these waivers and give insurers some ability to protect themselves against the highest of high-cost enrollees.'”

And it won’t just be the insurance companies asking for these changes. As premiums rise, healthy people could also prove to be a powerful lobbying bloc. “At any particular moment in time you have more healthy people living in your state than sick people, that’s just the way of the world,” Blumberg says. The shear numbers disparity could sway lawmakers otherwise inclined to help people with preexisting conditions. “When you’ve got the bigger chunk of your population agitating in one direction because affordability has decreased, and you’ve got insurers moving in the same direction to reduce their risk and be able to sell more policies to more people, it’s a pretty powerful combined force,” Blumberg says.

When the Congressional Budget Office analyzed the GOP’s bill last month, it estimated that half of Americans would live in states that adopted a waiver to tinker with the definition of essential benefits. An additional one-sixth of the country would live in states that changed the preexisting-condition ban. The CBO projects that premiums across the country would at first rise much higher under the GOP bill than under current law—20 percent higher in 2018, and then 5 percent higher in 2019. That trend would change as states begin implementing the waivers. “Starting in 2020…average premiums would depend in part on any waivers granted to states and on how those waivers were implemented and in part on what share of the funding available from the Patient and State Stability Fund was applied to premium reduction,” the CBO’s stated.

But the CBO only looked at the first decade of the law’s existence. Every health expert Mother Jones contacted noted that the pressures on state markets will only grow as time goes by. The problem will become especially acute starting in 2026, when the “state stability fund”—a pot of money the bill would provide to states to address various problems—totally dries up.

“You wouldn’t see all these progressive states going after a waiver in year one, but within a couple of years after that I think you would,” Blumberg says. “The tension and frustration of consumers would start emerging quite quickly, so changes might happen in a year, or it might take a couple of years. But then you’re really in a situation that is not going to make anybody happy.”