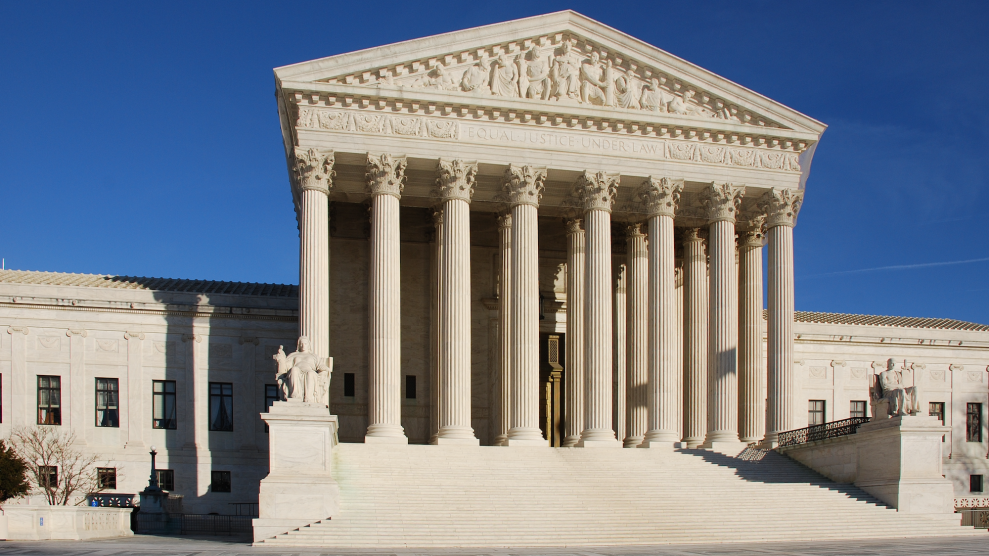 Alejandro Rodriguez was a year old when he arrived in the United States. Twenty-four years later, he landed in immigration detention. In between, he’d become a permanent legal resident, a dental assistant, and a father. He’d also acquired a criminal record.

The crimes weren’t particularly serious—convictions for “joyriding” in 1998 and drug possession five years later—but they were enough for the Department of Homeland Security to detain him in 2004. He spent the next three years in immigration detention.

On Monday, the Supreme Court announced that it would rehear arguments in Rodriguez v. Jennings in its next session, with a full court that includes its newest member, Justice Neil Gorsuch. The decision, at least temporarily, leaves in place a lower court ruling that detained immigrants have the right to a bond hearing every six months. But it’s not an encouraging sign for immigrants in detention.

The case will now be decided by five conservative justices. Immigrant advocates had hoped that Justice Anthony Kennedy, the court’s frequent swing vote, would provide the fifth vote in their favor. That may have been a tough sell: In 2003, Kennedy wrote a concurring opinion in Demore v. Kim stating that regular bond hearings were not needed for detained immigrants with criminal records. Cornell University law professor Stephen Yale-Loehr suggests that Monday’s announcement that the court will rehear Rodriguez indicates that the justices split 4-4. That would leave Gorsuch to break the tie, and so far he’s been a thoroughly reliable conservative vote.

More broadly, Rodriguez’s case highlights how the rapid expansion of immigration detention has overwhelmed the judicial system. Between 1995 and 2016, the number of immigrants in detention rose from 7,475 to 32,985, according to the American Civil Liberties Union. President Donald Trump’s budget proposes further increasing spending on immigration detention and removal by $1.5 billion.

Funding for the immigration courts that decide cases like Rodriguez’s has grown more slowly, contributing to a backlog of almost 600,000 immigration cases, up from about 175,000 a decade ago, according to the Transactional Records Access Clearinghouse. The result is that the detained immigrants who joined Rodriguez’s class action suit spent an average of 404 days in detention.

To help the courts keep up, the Justice Department is now moving immigration judges to priority cities. But the judges are being sent from states like New York, which has its own 81,284-case backlog. Paul Schmidt, a former immigration judge and chairman of the Board of Immigration Appeals, told Reuters that the “aimless docket reshuffling” will force the reassigned judges to postpone their own cases.

As immigrants wait for their hearings, the government pays $158 per day to keep them in detention, according to a 2014 report from the Government Accountability Office. There are also additional costs like the welfare benefits that the pregnant wife of a Rodriguez class member used to help cover her husband’s lost income.

The Obama administration believed that the hardship and costs were necessary to protect the public and ensure that immigrants showed up for hearings. The Solicitor General’s office argued that the difficulty of predicting whether an immigrant will jump bail led Congress to mandate that immigrants remain in detention while their cases proceed.

The Supreme Court upheld that approach in Demore, partly because it assumed the average detention period in appealed cases was five months. Last year, the Justice Department’s Executive Office for Immigration Review apologized after finding that the average wait at the time was actually more than a year.

That’s not the only change since Demore, Ahilan Arulanantham, the American Civil Liberties Union of Southern California lawyer who argued Rodriguez before the Supreme Court, said prior to Monday’s announcement. There are now highly effective tools like GPS for tracking immigrants who are out on bond.

“If they were citizens, they would be released,” Arulanantham said. “In fact, citizens with the same offenses as our class members are released in far greater numbers every day.”

Arulanantham adds that immigration judges often know a detainee is headed toward release, but they have no authority to grant bail. When those immigrants eventually get their hearing, they go home. “It shows the total pointlessness of the detention,” he said.

Still, he wasn’t surprised that the Obama administration fought for it. “From day one, they were completely invested in the continuation and actually the expansion of the immigration detention system,” he said. The government’s position in Rodriguez did not change once Trump took office.

In Rodriguez’s case, US Immigration and Customs Enforcement declined to release him under supervision at four separate custody reviews. But about a month after Rodriguez filed the suit, the government let him go and used his release to argue (unsuccessfully) that the class certification was moot.

After he was released in 2007, Rodriguez wore an ankle monitor and was not allowed to go more than 50 feet from his home at night. Data from an ICE contractor shows that about 95 percent of immigrants under intensive supervision show up for their final hearing. The supervision costs $10.55 per day—15 times less than detention.

More than seven years after Rodriguez was first detained, an immigration judge granted him a cancellation of removal that allows him to stay in the country. When Arulanantham and Rodriguez last spoke a few years ago, Rodriguez was back to working as a dental assistant.

In 2003, Kennedy wrote in his concurring opinion in Demore that an “unreasonable delay” in deportation proceedings could make it necessary to consider “whether the detention is not to facilitate deportation, or to protect against risk of flight or dangerousness, but to incarcerate for other reasons.” The decision to rehear the Rodriguez case suggests that despite the changes since Demore, conservative justices are still not convinced that immigrants are being held for “other reasons” that violate their rights.