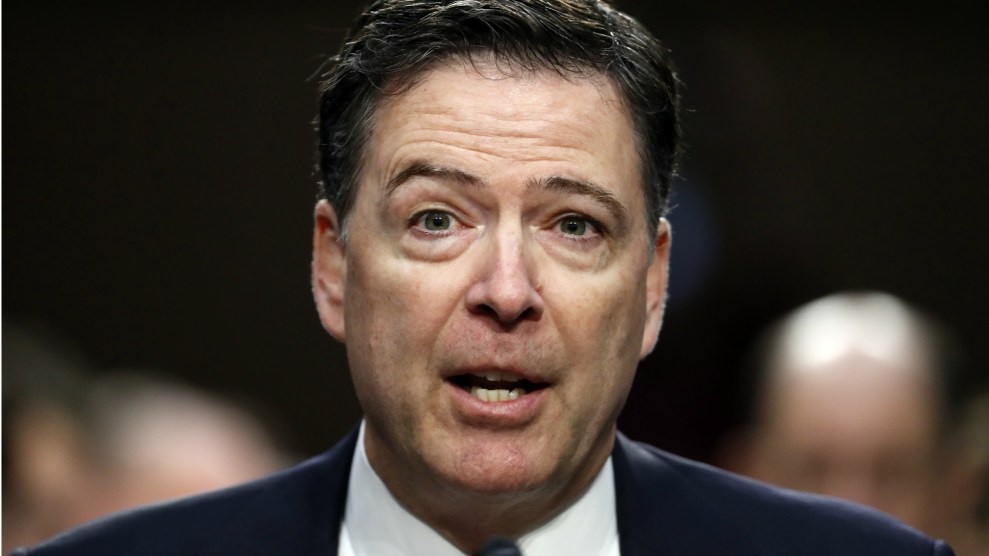 While James Comey testifies before the Senate intelligence committee about his interactions with Donald Trump, a dark money group with murky roots is running campaign-style attack ads accusing the former FBI director of grandstanding and placing politics above the security of the country.

Who is funding the group? It’s not entirely clear. We do know that the outfit is a new spinoff of a super-PAC called Great America PAC, which was organized during the 2016 election by conservative election law attorney Dan Backer. (Backer says he is merely the attorney who organized the group, but on paperwork filed with the state of Virginia he is listed as the executive director.) In election law circles, Backer is known mostly for his pugnaciousness. Over the years, he has regularly challenged the Federal Election Commission’s rules, once pulling off a victory at the Supreme Court that helped do away with one of the last remaining limits on donations to political candidates and committees.

Great America PAC’s first months were notable mostly for Backer’s protracted and snarky war of words with FEC lawyers about whether the PAC’s original name (TRUMPAC) violated rules prohibiting outside organizations from using a candidate’s name. Backer argued there was no candidate named “TRUMPAC,” but he eventually relented and changed the name.

As a series of higher-profile pro-Trump super-PACs failed to take off during the presidential race, Backer’s group improbably became one of the Trump campaign’s main outside allies—even though Trump’s then-campaign manager, Corey Lewandowski disavowed any association and threatened to send the group a cease-and-desist order. In the end, the super-PAC was the second-biggest pro-Trump group in terms of campaign spending.*

The super-PAC’s biggest contributor so far has been Isaac Perlmutter, a conservative businessman who made his fortune with Marvel Comics and who dined privately with Trump at Mar-a-Lago in March. Perlmutter donated $5 million to the outfit just days before the November election.

Since Trump took office, various players in his orbit have proposed setting up independent groups to provide outside support to bolster the president’s agenda, but these efforts largely have been plagued by in-fighting and inaction. Backer’s group, however, has plowed on, and recently it has affiliated itself with Great America Alliance. The nonprofit has an odd history: Backer set it up in 2013 under a different name, and it was used to attack a Republican running for Texas attorney. The group was reformulated this spring to align with Great America PAC. While Gingrich and Giuliani are billed as the co-chairmen, corporate paperwork filed in Virginia, where the group is based, shows that a number of California-based Republican operatives serve on the board.

Great America PAC has disclosed giving its nonprofit affiliate $480,000 earlier this year, but thanks to its status as a dark money group, no other information has been disclosed on who is funding it, how much money it has, or how much money it will spend on its anti-Comey ad campaign.

Backer declined to comment and forwarded questions to his clients, whom he did not name and who did not respond.

Correction: An earlier version of this article incorrectly said that Trump’s campaign manager at the time referred to Great America PAC as a “big league scam”. That was in reference to another super-PAC.