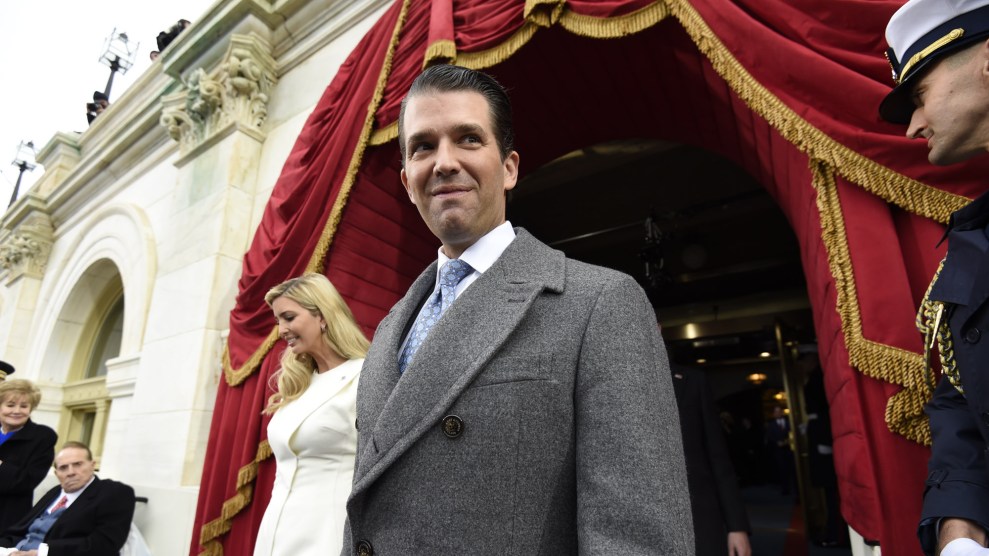 On Tuesday morning, there was a stunning development in the Trump-Russia scandal: Donald Trump Jr. confessed. In yet another bombshell story, the New York Times reported on emails showing that the president’s oldest son had eagerly accepted an offer of help during the 2016 campaign from what he understood to be the Russian government. Trump Jr., the Times disclosed, had set up a meeting with a Russian attorney in the hopes of receiving derogatory information on Hillary Clinton straight from Putin’s regime. As the Times was publishing this story, Trump Jr. tweeted out those same emails.

The emails reveal that top Trump campaign advisers Paul Manafort and Jared Kushner attended the meeting and suggest that all three Trump advisers colluded in what seemed to be a Russian government-backed attempt to hurt Clinton in order to help Trump win the presidency. This new development contradicts the long series of denials from Trump defenders who have claimed that there was no collusion, that there was no evidence Russian leader Vladimir Putin wanted Trump to win, and that the Trump-Russia affair is merely a hoax perpetuated by loser Democrats and fake news outlets.

The Trump Jr. emails also provide partial support for some information within the Steele dossier.

The Steele memos, which Mother Jones first reported on a week before Election Day, were compiled during the campaign by a former British intelligence officer named Christopher David Steele, who was hired by a Washington, DC, research firm retained to unearth information on Trump. The documents contained troubling allegations about Trump and his connections to Russia and relayed unverified salacious information about the candidate. The first memo, dated June 20 and based on the former intelligence officer’s conversations with Russian sources, stated, “Russian regime has been cultivating, supporting and assisting TRUMP for at least 5 years. Aim, endorsed by PUTIN, has been to encourage splits and divisions in western alliance.” It asserted that Russian intelligence had “compromised” Trump during his visits to Moscow and could “blackmail him.”

Steele made the memos available to the FBI during the campaign, and the bureau investigated some of the information they contained.

The memos made headlines after the election, when CNN reported that Trump, as president-elect, and President Barack Obama had been told about their contents during briefings on the intelligence community’s assessment that Putin had mounted a covert operation during the campaign to hack Democratic targets and disseminate stolen emails in order to benefit Trump.

Trump and his supporters have denounced the Steele memos as unsubstantiated trash, with some Trump backers concocting various conspiracy theories about them. Indeed, key pieces of the information within the memos have been challenged. But the memos were meant to be working documents produced by Steele—full of investigative leads and tips to follow—not finished reports, vetted and confirmed.

One interesting element of the Donald Trump Jr. emails now in the news is that they track with parts of the Steele memos.

In that first memo, dated June 20, Steele wrote that Trump “and his inner circle have accepted a regular flow of intelligence from the Kremlin, including on his Democratic and other political rivals.” The Trump Jr. email chain began on June 3, 2016. This was shortly after Trump had secured the Republican presidential nomination. It was that day that Rob Goldstone, a talent manager for a middling pop-star named Emin Agaralov, contacted Trump Jr. and said Emin’s father, Aras Agalarov, a Putin-friendly billionaire developer, had met with the “crown prosecutor of Russia,” who offered to provide the Trump campaign with negative information on Clinton. The Agalarovs and Goldstone had a close relationship to the Trumps, because they all had worked together in 2013 to bring the Miss Universe pageant, which Trump owned at the time, to Moscow. (Part of the deal was that Emin would get to perform two songs.) Following that event, both Trumps worked with both Agalarovs to develop a major project in Moscow. (It never happened.)

This email from Goldstone to Trump Jr. led to a meeting six days later, where a Kremlin-connected Russian attorney spoke to Trump Jr., Kushner, and Manafort about negative information on Clinton. In a statement, Trump Jr. says that what she offered was vague and meaningless, suggesting there was nothing to it. (But Trump Jr. has dissembled repeatedly about this meeting.)

Source A confided that the Kremlin had been feeding TRUMP and his team valuable intelligence on his opponents, including Democratic presidential candidate Hillary CLINTON, for several years…This was confirmed by Source D, a close associate of TRUMP who had organized and managed his recent trips to Moscow, and who reported, also in June 2016, that this Russian intelligence had been “very helpful”.

The memo also reported that there was anti-Clinton information that Putin was sitting on:

A dossier of compromising material on Hillary CLINTON has been collated by the Russian intelligence services over many years and mainly comprises bugged conversations she had on various visits to Russia and intercepted phone calls rather than any embarrassing conduct. The dossier is controlled by Kremlin spokesman, PESKOV, directly on PUTIN’s orders. However it has not as yet been distributed abroad, including to TRUMP. Russian intentions for its deployment still unclear.

There has been no confirmation that Putin steadily fed information to Trump’s camp or that a Kremlin-controlled anti-Clinton dossier existed. But one of Steele’s overarching points in this memo was that Putin’s regime was funneling derogatory Clinton material to Trump. The Trump Jr. emails suggest that the Russian government was aiming to do that and that the Trump campaign was willing and eager to receive assistance from Putin. So Donald Trump Jr. has done what Steele could not: produce evidence that the Trump campaign was—or wanted to be—in cahoots with a foreign adversary to win the White House.