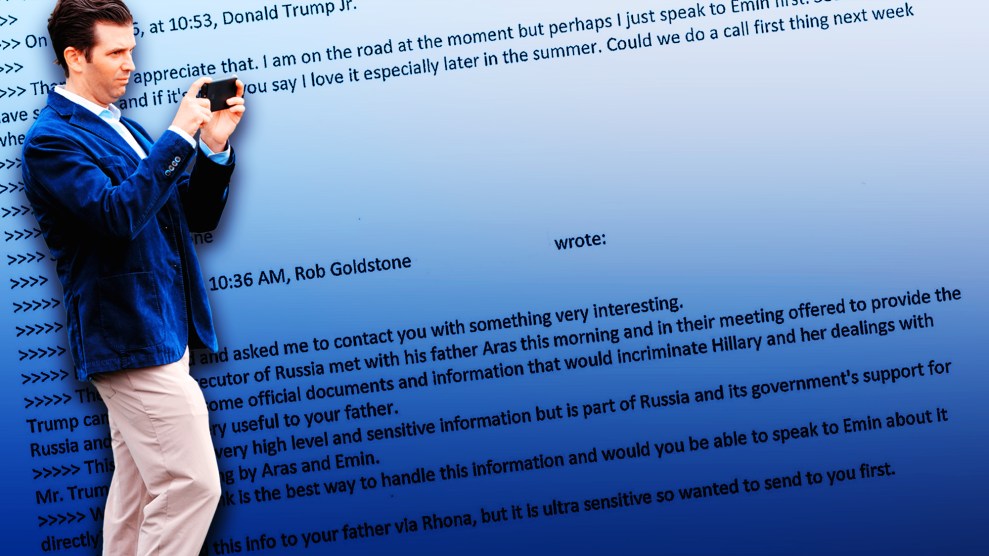 New emails published by the New York Times Tuesday morning reveal that Donald Trump Jr. leapt at the chance to meet with a Russian lawyer who, he was told, was acting as an emissary from the Russian government and offering the Trump campaign negative information on Hillary Clinton.

The emails—which Trump Jr. tweeted out when he learned the Times was going to reveal them—show top Trump campaign advisers colluding, or attempting to collude, with Vladimir Putin’s regime. This is a dramatic development in the Trump-Russia scandal and undercuts the many claims from the Trump camp that Donald Trump and his associates had no contacts with the Russian government during the campaign.

The emails also make clear that the Trump campaign knew that Putin was trying to help Trump win the presidency.

In a series of June 2016 emails sent by British music publicist Rob Goldstone to Trump Jr., Goldstone said that the “Russian government attorney”—Natalia Veselnitskaya—would provide documents that “would incriminate Hillary and her dealings with Russia and would be very useful to your father.” He also elaborated on the source of the information: “This is obviously very high level and sensitive information but is part of Russia and its government’s support for Mr. Trump.”

Trump Jr. moved quickly to set up the meeting: “If it’s what you say I love it especially later in the summer,” the president’s eldest son replied, according to the exchange. A meeting was then set up at Trump Tower on June 9, 2016, between Veselnitskaya and Trump Jr.; Jared Kushner, the president’s son-in-law and close adviser; and Paul Manafort, who was at the time managing the campaign.

According to the emails, the Russian effort to help Trump was occurring at a high level within the government. One email from Goldstone to Trump Jr. stated that the “crown prosecutor of Russia” had met with Aras Agalarov—a Putin-friendly billionaire developer in Russia who partnered with Donald Trump to hold the Miss Universe contest in Moscow in 2013—and “offered to provide the Trump campaign with some official documents and information” that would hurt Clinton.

When the Trump Tower meeting was first reported on Saturday, Trump Jr. said it was held to discuss an on-going dispute between the US and Russia over sanctions and international adoptions. He didn’t mention any Clinton dirt. Yet when further details were reported the following day, he conceded that Veselnitskaya had offered derogatory information about Clinton.

Trump Jr. continued to deny any wrongdoing on Tuesday morning, instead pointing the finger at the media and Democrats:

Media & Dems are extremely invested in the Russia story. If this nonsense meeting is all they have after a yr, I understand the desperation!

On Tuesday morning, NBC published an interview with Veselnitskaya in which she contradicted Trump Jr. by denying she possessed any dirt on Clinton: “I never had any damaging or sensitive information about Hillary Clinton. It was never my intention to have that.” Veselnitskaya has denied any acting as a representative of the Russian government.

Mark Corallo, who works with Marc Kasowitz, President Donald Trump’s private attorney, told the Guardian on Monday that “the president was not aware of and did not attend the meeting.”

Here's my statement and the full email chain pic.twitter.com/x050r5n5LQ

Here is page 4 (which did not post due to space constraints). pic.twitter.com/z1Xi4nr2gq