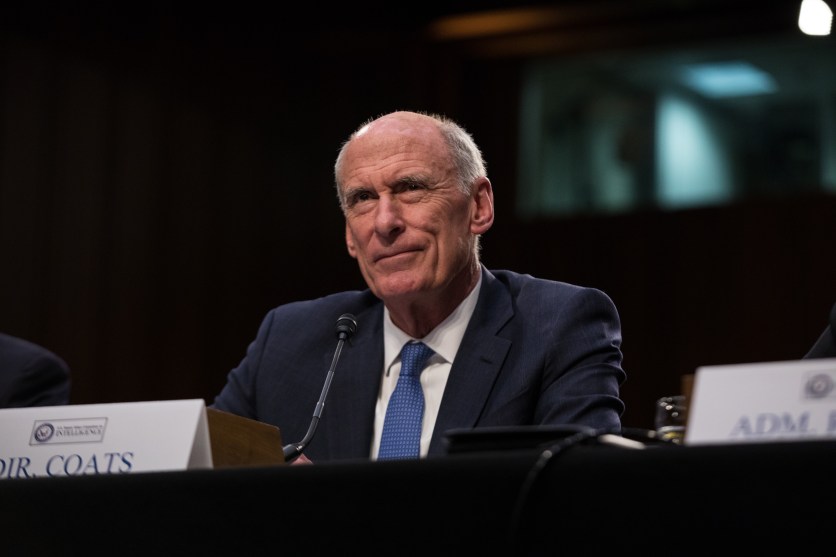 Last week, Dan Coats, the former senator from Indiana and current head of the US intelligence community, was interviewed by NBC’s Lester Holt in front of a live audience at the Aspen Security Forum, a gathering where diplomats, journalists and top US officials mingle with business executives in between livestreamed panel discussions on world affairs. (The hourlong discussion was posted on YouTube.)

ProPublica has obtained internal talking points, apparently written by one of Coats’ aides, anticipating questions that Holt was likely to ask. They offer a window into the euphemisms and evasions necessary to handle a pressing issue for Coats: how to lead the intelligence community at a time when the president has insulted it on Twitter and denigrated its work while questions about Russian influence consume ever more time and attention in Washington. Sixteen of the 26 questions addressed by the talking points concerned internal White House politics, the Russia investigation, or the president himself. One question put the challenges facing Coats this way: “How can you work as DNI for a president that undermines your work?”

DNI spokesman Brian Hale told ProPublica that the 17-page document was a small, unclassified part of “a thick binder” of preparation documents for Coats’ interview. The other pieces, according to Hale, “had substantive material on Russia, China, Iran, Venezuela, North Korea.” The talking points document, he said, “was designed to address the questions we anticipated being asked because of the news cycle.”

Prepared questions and answers—talking points—have long been standard procedure in Washington for officials facing a major interview or public testimony. In this instance, the document anticipated far sterner questions than Holt posed in the actual interview and Coats, an experienced official, often departed from the script.

In the talking points, Coats was advised to say that he and the president have “a trusted relationship,” framing any disagreements as constructive ones. “We may not always agree,” the document stated. “We must maintain an open dialogue … the relationship portrayed in the media between the president and the intelligence community is a far cry from what I have personally experienced and witnessed … there is a healthy dialogue and a good back and forth discussion.”

There’s no doubt that Coats, the statutory leader of the 16-agency intelligence community, is operating in an unusual environment. Normally, American intelligence agencies do their work quietly, avoid public political disputes, and settle whatever differences they have with the White House privately.

Trump’s opinions are out of step with the conclusions of the agencies he is supposed to be leading.

But Trump’s willingness to openly criticize the intelligence community has altered that equation. Days before taking office, he compared America’s spies to Adolf Hitler’s Gestapo. “Intelligence agencies should never have allowed this fake news to ‘leak’ into the public,” Trump tweeted, referring to allegations contained in the Steele dossier, the controversial, unverified research that purportedly raised the possibility that Trump could be susceptible to Russian blackmail. “Are we living in Nazi Germany?”

The differences between the White House and the leadership of the intelligence community are severe, in the view of former CIA and NSA Director Michael Hayden. “This is a bit of a true-believer administration,” he said in an interview with ProPublica at the Aspen conference. “Faith-based, faith with a small ‘f.’ They think they know all the answers. And then you’ve got people living in this fact-based, empirical, inductive world. They’re talking to people who, as an article of faith, know what the answers are. That creates great tension at the very top.” (Hayden had not seen Coats’ talking points when we spoke, and he declined to review them later.)

American spies do not like having their work dismissed by the president. Nor do they appreciate comparisons to Nazi Germany. At Aspen, former CIA Director John Brennan made it clear that the wounds inflicted by Trump’s words had not yet healed. “The person who said that should be ashamed of himself,” Brennan said, during another panel. Coats’ predecessor, Gen. James Clapper, called Trump’s comments “a terrible, insulting affront … completely inappropriate.”

As president, Trump has heaped public scorn on the US intelligence community’s conclusion that the Russian government sought to interfere in the election. “Well, I think it was Russia, and I think it could have been other people in other countries,” the president said earlier this month, when asked during a news conference to give a definitive answer on Russian involvement. The White House continues to cast doubt on Kremlin interference, despite repeated and unequivocal statements to the contrary from the intelligence community.

Trump’s opinions are out of step with the conclusions of the agencies he is supposed to be leading. At Aspen, CIA Director Mike Pompeo said he was “confident that the Russians meddled in this election, as is the entire intelligence community.”

Coats’ script echoed that view. “I stand by the IC’s Assessment,” it stated. “President Putin ordered an influence campaign in 2016 aimed at the US presidential election.”

The talking points anticipated that NBC’s Holt would ask, “Does it trouble you that President Trump has not come out strongly and said ‘yes’ Russia interfered in the election?” The proposed responses sidestepped the question: “The intelligence community has made it clear as to what our assessment is regarding Russian activity during the 2016 elections. … The president and his policymaking team … must consider intelligence information along with other inputs from other sources too. So intelligence is only one of many inputs,” read the talking points.

“What has turned out to be what was thought to be a 10-minute briefing every day is at least 30 minutes has turned into 40 minutes.”

“What other inputs should he be listening to?” said a former official from the Obama White House who reviewed the document at ProPublica‘s request. “What Putin tells him behind closed doors? What he reads on InfoWars? This answer should be read as a slap in the face of the intelligence community.”

When asked whether Trump’s comments have hurt the community’s morale, Coats was advised to say that he is “so proud to lead the US intelligence community … extremely impressed,” and that he frequently interacts with subordinates “over brown bag lunches.” At the same time, the points emphasize Coats’ close proximity to Trump and his good relations with Pompeo. The word “community” was repeatedly emphasized. Coats was advised to describe his role as “head coach” and say “we’re all on the same team.”

At several moments during his interview (here’s the transcript) Coats appeared to draw from the script. One was his description of Trump himself, who was criticized during the transition for skipping the president-elect’s customary daily intelligence briefing. In response to the question of how Coats can work with a president who undermines him, the talking points advised that Coats describe Trump like this: “He is fully engaged and asks important and insightful questions when being briefed. He is so engaged that sometimes the briefing [sic] go longer than scheduled and we are asked to wrap it up to allow for his next scheduled meeting.”

Coats’ actual description of Trump’s approach to briefings also emphasized the president’s inquisitiveness and appetite for intelligence: “He interjects questions on a very frequent basis and we have to lot of times keep coming back to some of the central points. … What has turned out to be what was thought to be a 10-minute briefing every day is at least 30 minutes has turned into 40 minutes.”

One answer at the end of the document pointed towards substantial differences between the White House and Coats regarding climate change. The talking points characterize climate change as a potential national security risk, one that could potentially “lead to conflict” and is “likely to contribute to migrations that exacerbate social and political tensions.” Trump, meanwhile, has said he will withdraw the US from the Paris climate accord, which seeks to limit the global rise in temperature to 3.6 degrees Fahrenheit.

When asked about morale, Coats used the script’s lines about brown bag lunches and his own pride about leading a talented workforce. “Intelligence officers don’t expect their work to be easy,” was another answer suggested by the document. Coats left that part out.