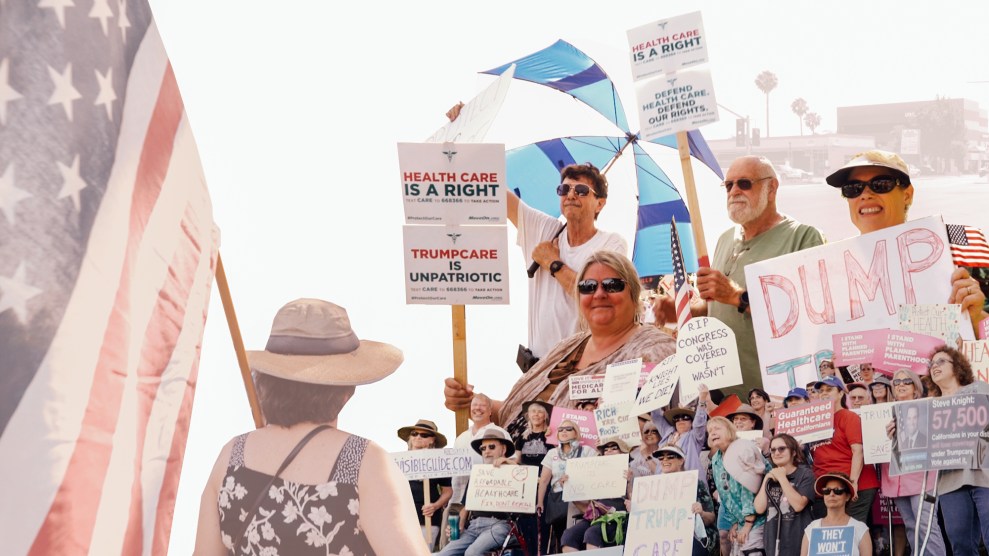 Republicans in Congress still can’t figure out what they want to do for health care. Despite no consensus among his party, Senate Majority Leader Mitch McConnell (R-Ky.) promised to bring his latest plan to gut Obamacare to a vote next week, after his first two attempts collapsed without the necessary votes. His plan—a rehash of a 2015 bill that President Barack Obama vetoed, and that the Congressional Budget Office said would leave 32 million more uninsured—is almost certainly doomed to fail, as long as senators don’t flip-flop on their public statements against the bill.

Grassroots campaigners around the country aren’t letting up the pressure while McConnell struggles, with advocates continuing to press politicians about the real-world dangers of killing Obamacare. At least 155 people were arrested Wednesday morning, protesting Republican health care efforts at Senate office buildings in Washington, DC—including outside McConnell’s office.

I wanted to learn more about what drives these protests, so I went to one earlier this month in Simi Valley, California, outside Republican Rep. Steve Knight’s district offices.

Knight voted in favor of the rollback of the Affordable Care Act in May but has remained quiet on plans up for consideration in the Senate. He is in a tricky spot: His district (alongside six others in California with Republican representatives) voted for Democrat Hillary Clinton in November. Meanwhile, one consumer advocacy group estimated that as of January 2017 at least 76,000 of Knight’s constituents have insurance thanks to the Affordable Care Act.

Lee Ann Holland  joined the protest to advocate for her eight-year-old daughter, who has autism and epilepsy and depends on the ACA’s ban on denial of service for preexisting conditions. “I am afraid of what will happen to her after I’m gone,” Holland wrote me in a follow-up email. “If Medicaid and the services it provides to disabled adults are gutted, I am afraid of her being locked away in an institution. That is what keeps me up at night.”

After everyone else headed to their cars and back to their regular Thursday evenings, one woman hung around for a few moments more. Alone on the sidewalk, Desiree Patenaude brandished a Planned Parenthood sign in one hand, mimed honking a car horn with the other, and pleaded for “one more honk” from cars whizzing by. With no cars rising to the occasion, she finally gave up: “You could die out here trying, I guess.”

See Lee Ann and Desiree, along with others I met at the rally, in the series of videos below, and on Instagram.

Leanna Brand, from the local chapter of the political resistance group "Indivisible" helped organize this lively protest outside the offices of Congressman Steve Knight (R-CA). Brand says she was stunned into action by November's election of Donald Trump. “A few of us decided to band together and resist this horrible agenda against the environment, against our healthcare, against women’s rights, against most everything that we’re for," she said. "So, I put together a Facebook page, and I went to an advocacy training class, and got together with a bunch of my singer friends.” —July 6, 2017, Simi Valley, CA. #HealthCareMoJo #obamacare #trumpcare #steveknight

“I love paying taxes. But not for wars. I’d like to pay taxes for the common good that lifts everybody up.” —Ellen Learned, July 6, 2017, Simi Valley, CA. #HealthCareMoJo #obamacare #trumpcare #steveknight

“We stand with everyone. We stand with the elderly that are going to lose their ability to be in nursing homes with decent care. We stand with children that won’t be able to get their Medicaid supplements. We stand with middle-aged people that will lose everything—their homes and their cars and everything—with one illness. We stand with everybody, there’s no boundaries between us. We are all indivisible. This is America.” —Adriene Coulter, on the meaning of the word “indivisible,” at a health care protest, in Simi Valley, CA., July 6, 2017. #HealthCareMoJo #obamacare #trumpcare #steveknight

Paula Graciela Kahn lost her mother to cancer in 2015. She wants her representative, Steve Knight (R-CA), to help save health insurance in America by improving Obamacare, rather than by destroying it. —July 6, 2017, Simi Valley, CA. #HealthCareMoJo #obamacare #trumpcare #steveknight

Seven districts in California with Republican representatives voted for Hillary Clinton in 2016—the 25th district, represented by Steve Knight, is one of them. Michelle Manire Fowle is unhappy with the Democratic Party’s messaging, so she’s created a private Facebook group to brainstorm branding ideas to present to Democrats. “Otherwise we’re gonna keep losing!” she said. —July 6, 2017, Simi Valley, CA. #HealthCareMoJo #obamacare #trumpcare #steveknight