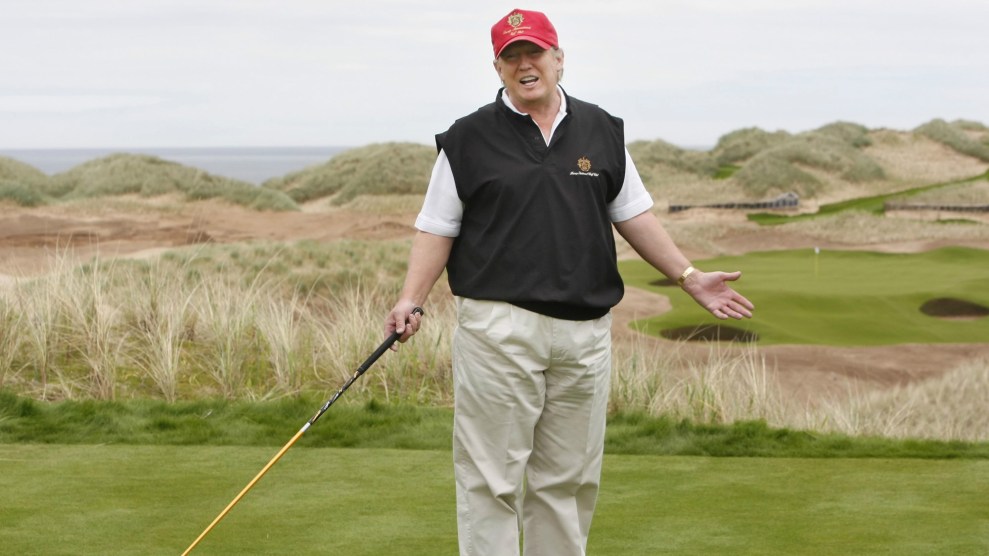 Donald Trump likes to brag that his Scottish golf courses are the most beautiful and successful in the world, but while the magnificence of their surroundings is not in question, their profitability is very much in doubt. The two courses, Turnberry on the west coast of Scotland and Aberdeen on the North Sea, have together been losing millions of dollars per year. And that doesn’t seem likely to change anytime soon: Scottish environmental authorities are now putting the brakes on a Trump Organization development that would make one of the president’s prized properties vastly more profitable.

Two Scottish government agencies—the Scottish Environment Protection Agency and Scottish Natural Heritage, a conservation agency—say they will object to the Trump Organization’s plans to build a second 18-hole golf course at Aberdeen, known as the Trump International Golf Links. If they succeed in killing this expansion, it will be a major setback for Trump and raise doubts about the future profitability of the whole venture.

In 2008, when Trump announced plans to build the course, locals were welcoming but skeptical. Trump had purchased the property, an 1,800-acre estate overlooking the North Sea that is surrounded by towering (and environmentally sensitive) sand dunes, in 2006. The location is beautiful but relatively undeveloped. Many wondered whether he would really be able to attract enough golfers to justify the investment. But Trump made big promises: He would build two world-class golf courses, a luxury hotel with hundreds of rooms, and 1,450 homes on the property. In total, he said, he would invest more than $1.5 billion.

But the Trump Organization delayed its plans following the financial crisis of 2007 and 2008, only restarting the expansion more recently. Currently, the resort has just one golf course, which is regarded as impressive and beautifully designed, but by many accounts it’s rarely busy. Instead of hundreds of hotel rooms and pricey homes for sale, there are only several dozen rooms for rent. Instead of thousands of jobs, just 150 permanent positions have been created.

And the course is a money-loser. While Trump listed the course as having $3.8 million in revenue on disclosure documents filed in the United States, corporate filings made in the United Kingdom by the Trump Organization show that the course actually lost $1.8 million in 2015, the most recent year that it reported earnings. Previous years have shown similar losses.

Industry experts say the value of many of Trump’s golf resorts is not in the daily management of the course itself but rather in the development and sale of housing. And according to the 2008 master plan that Trump convinced local planning officials to accept, he needs to build two courses before he is allowed to break ground on the profitable housing development.

Last year, before handing the reins of the company to his kids, Trump attempted to escape the earlier plan, with a pitch to build 850 homes and 1,900 timeshare units before building the second course—which the local planning board shot down, ordering him to stick to the original plan. The local authorities also made it clear that they wanted Trump to build hundreds of affordable housing units and a school, as well as pay for infrastructure improvement costs.

Though Trump has pointed to his Scottish courses as evidence of his international popularity, in reality he has generated a lot of bad blood in the country where his mother was born. Long before Trump ran for president, a move that was not popular in Scotland, he had already managed to alienate locals by feuding with his neighbors, whose land he aggressively tried to buy, and bickering with local planning authorities.

At one testy meeting, Trump was apparently startled by a local planning official who accused him of not researching the limits of the property before he bought it.

“You know, nobody has ever told me before I don’t know how to buy property,” he snarled. “You’re the first one. I have done very well buying property. Thanks for the advice.”

But with the Trump Organization back to trying to get the second golf course built, Scottish regulators are making the case that Trump apparently doesn’t fully understand the development limitations. According to the Guardian, the Scottish Environmental Protection Agency is objecting to the Aberdeen expansion on the grounds that the Trump Organization’s plans for managing sewage are inadequate. Scottish Natural Heritage, meanwhile, says the company’s expansion plans don’t take into account the fragility of the nearby dunes and how they may affect the course as they shift—already a recurring problem on the first course, where greens are strafed by mini-sandstorms.

In 2012, Trump also clashed with Scottish authorities over construction of an offshore wind farm nearby, demanding that the project be canceled lest it ruin his course’s view. The wind farm got built, and Trump fumed.

“I have spent close to £100 million at this stage,” Trump said at the time. “I have millions more to put into that site, but I will not invest another penny if an industrial plant is built nearby.”

Faced with the prospect of getting stymied by the locals again, the Trump Organization may not even have the option of investing more in the property.