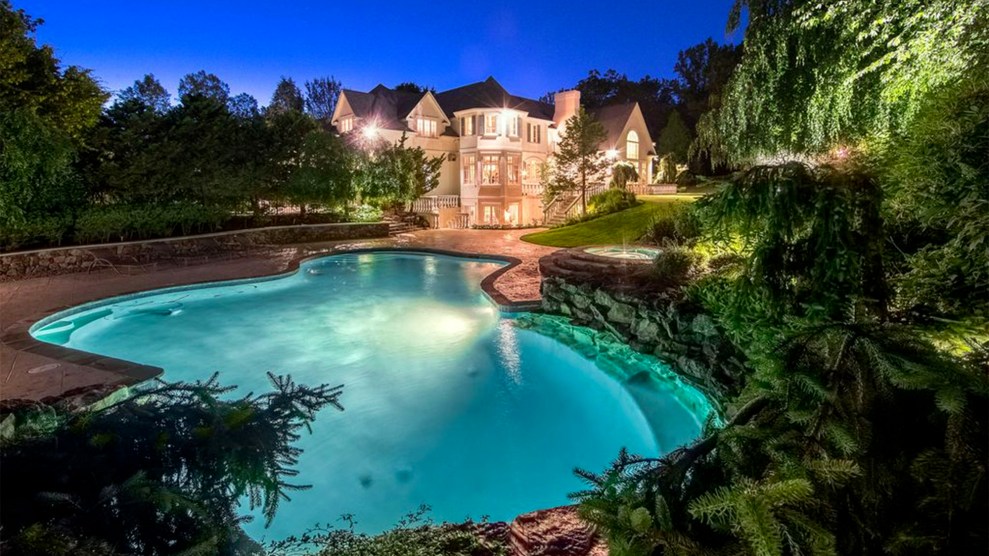 The billionaire Russian real estate magnate and his pop singer son who helped arrange the June 2016 meeting where Trump campaign officials hoped to receive dirt on Hillary Clinton from the Kremlin are looking to get out of the United States—or, at least, out of New Jersey.

Aras Agalarov, who in 2013 received an Order of Honor award from Vladimir Putin for his construction work in Russia, last month listed a seven-bedroom, 10 bathroom, French-manor style home he owns in Alpine, New Jersey, fully-furnished. People involved in the sale said a buyer signed a contract to purchase the home last week, for just under the $6,900,000 asking price, though the sale is still pending. That’s a whopping discount from the $9.3 million Agalarov paid in 2005 for what Sotheby’s touted as a “stunning private oasis.”

After putting the property on the market in April 2015 for $3.3 million, the younger Agalarov is now offering the manse for $2.9 million, just shy of the $3 million his family spent on the home in 2008.

According to emails released by Trump Jr.—after he learned the New York Times was on this story—the Agalorovs helped set up the Trump Tower meeting where Donald Trump Jr., President Trump’s son-in-law Jared Kushner, and then-Trump campaign chief Paul Manafort, expected to receive negative material on Clinton from a Kremlin-connected attorney.

Aras Agalarov’s home went on the market on June 15—about three weeks before the Times, in a series of reports, broke the news of the meeting. Sometime in June, the Trump camp learned that the Agalarov-brokered meeting would probably become public as a result of Kushner filing an amended security clearance form that listed the meeting. (Probably that same month, Trump Jr. hired a lawyer. A lawyer for Trump Jr. received an initial payment from the Trump campaign on June 27.)

The Trump and Agalarov families formed a relationship in 2013, when they partnered to hold the 2013 Miss Universe contest at a Moscow-area concert pavilion, Crocus City Hall, which Aras Agalarov owns. Emin Agalarov performed at the event. Trump Sr. later appeared in one of the singer’s videos. Aras Agalarov made his fortune building shopping malls in Russia, but won Putin’s favor by building important national projects, such as two stadiums for the 2018 World Cup.

Like many before them, the Agalarovs, say they moved to New Jersey for the schools. Emin told NJ.com in 2014 that his father, while living in Manhattan, bought the Alpine home so that Emin could attend Tenafly High School for his junior and senior years. Emin then went to college in the United States at Marymount Manhattan before returning to Russia in 2001. The singer kept his home and still “considers himself something of a Jersey guy,” NJ.com reported.

The listing agent on both the Agalarov homes is Sheila Agalarova, who is Aras Agalarov’s daughter and Emin’s sister.

Emin Agalarov’s home is just a few blocks from a property owned by senior White House adviser Kellyanne Conway and her husband George. They paid $6 million for the property in 2007. In 2011, Forbes ranked the 07620 zip code belonging to Alpine as the most expensive in the country, with a median home value of about $4.3 million.

While it might seem odd that a family that made billions in Russian real estate is posed to take a drubbing in the New York suburbs, James Collins, who represented the sellers of the Demarest property in 2008, said the performer’s difficulty finding a buyer reflects the state of “the whole Tri-State market,” where high-priced homes are often remaining on the market for long stretches, even years.

But the agent involved in the sale said that Aras Agalarov had offered his home for a low enough price to unload it fast. “At a more realistic price they sell quicker,” the agent said.