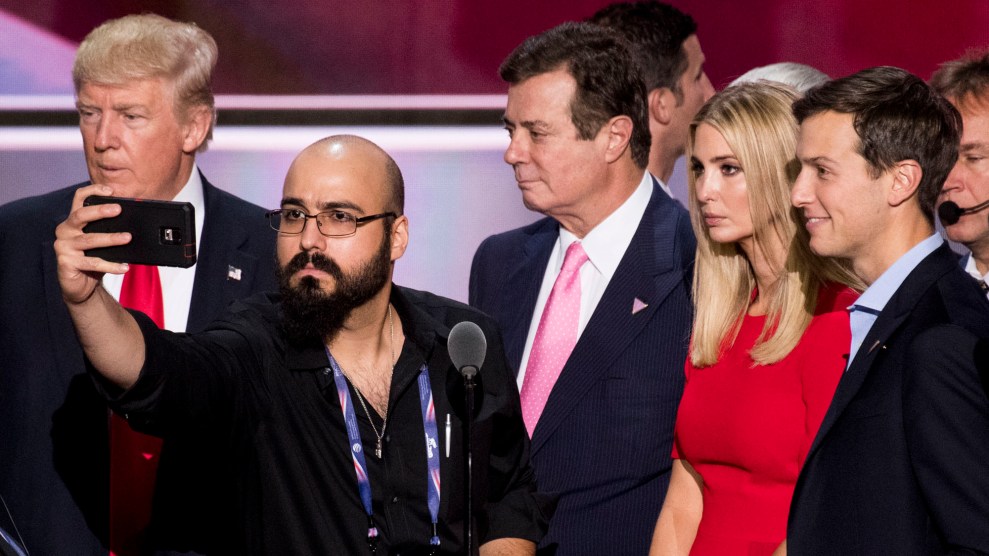 A few weeks ago, I wrote a piece noting that whether or not Donald Trump colluded with Vladimir Putin’s covert operation to subvert the 2016 campaign, the public record was already clear that Trump, knowingly or not, had aided and abetted Russia’s war on US democracy. He did so by repeatedly ignoring evidence and denying Moscow’s role in the criminal hacking of Democratic targets and the subsequent release of stolen emails. Those denials muddied the storyline and prevented a vigorous bipartisan response to Putin’s attack.

The disclosure this week of Donald Trump Jr.’s emails revealing that he, Jared Kushner, and Paul Manafort joined what they believed was a secret Russian government project to disseminate dirt on Hillary Clinton shows that the Trump campaign went far beyond creating a political climate favorable to Putin’s clandestine assault. The Trump camp actually protected Russian intelligence while it was waging information warfare against the United States—and Trump’s most intimate advisers knew they were doing so.

The Trump camp actually protected Russian intelligence while it was waging information warfare against the United States.

The new emails prove that in the first week of June 2016, Trump Jr.; Kushner, Trump’s son-in-law and key adviser; and Manafort, who the previous month had been named Trump’s campaign chairman and chief strategist, all became aware there was a Russian government plot to help Trump become president. Each received an email from Rob Goldstone, a talent manager who had helped broker the deal for Trump’s Miss Universe contest to be held in Moscow in 2013, and this message was not subtle: It stated that Trump’s business partner in Russia, billionaire developer Aras Agalarov, had been told by Russia’s national prosecutor, a Putin crony, that the Putin regime wanted to convey to the Trump campaign negative material on Clinton. Goldstone noted, “This is obviously very high level and sensitive information but is part of Russia and its government’s support for Mr. Trump.”

This led to a June 9, 2016, meeting between the three Trump advisers and a Russian attorney that Trump Jr. now claims yielded no useful information. (The lawyer has denied representing the Russian government and has said she did not attempt to pass along derogatory information about Clinton.) Perhaps the meeting was a bust. But these Trump men did learn something rather important during this episode, if they were not already aware of it: The Putin regime was on Trump’s side and was looking to help Trump by spreading disparaging material about Clinton. This cannot be denied—the Trump campaign knew Moscow was aiming to intervene in the election to benefit Trump.

Flash forward…well, you don’t really have to flash forward. Five days later, the news broke that the Democratic National Committee had been hacked. Cyber experts hired by the DNC produced a report pointing to Russian intelligence as the culprit. How did the Trump campaign respond? The next day it released this statement: “We believe it was the DNC that did the ‘hacking’ as a way to distract from the many issues facing their deeply flawed candidate and failed party leader.”

Ponder that spin. Trump’s campaign chief had learned days earlier that the Russians were targeting Clinton. Yet now the campaign was suggesting the Russian hack was a hoax cooked up by the victims.

A person who helps a criminal conceal a crime, or who aids an escape or who even fails to report a crime, is known as an accessory after the fact.

This pattern continued. On July 22, 2016, WikiLeaks released 22,000 of the hacked DNC emails, causing havoc at the start of the Democratic convention. Since the initial news story of the hack, more cyber experts had concluded Russian intelligence was behind the operation, and now Democrats and Clinton campaign officials immediately raised the issue that Putin was meddling in the election. The Trump campaign responded by dissembling.

Manafort went on ABC’s This Week on July 24 and was asked whether there were connections between the Trump campaign and the Putin regime. “No, there are not, and, you know, there’s no basis to it,” said the man who the previous month had met with an emissary from a Putin crony to receive anti-Clinton material from the Kremlin.

Trump Jr. was even more vociferous. Appearing on CNN, Trump’s oldest son was asked about the Clinton campaign’s assertion that Russia had hacked the DNC as part of a plot to benefit his father. Shaking his head, he answered, “It’s disgusting. It’s so phony…I can’t think of bigger lies.” Trump Jr. continued, “That exactly goes to show you what the DNC and what the Clinton camp will do. They will lie and do anything to win.”

Both of these men knew that Putin’s government had signaled to the Trump campaign that it wanted to furtively help Trump. Yet here they were each saying there had been no contacts—that was a lie—and dismissing the notion of any Russian involvement.

Manafort and Trump Jr. were providing cover for Putin’s operation.

The next day, Trump followed suit with a tweet: “The new joke in town is that Russia leaked the disastrous DNC e-mails, which should never have been written (stupid), because Putin likes me.” A day later, he reiterated this sentiment: “In order to try and deflect the horror and stupidity of the Wikileakes disaster, the Dems said maybe it is Russia dealing with Trump. Crazy!”

There is no evidence yet that Trump was told about the June 9 meeting and the emails that preceded it—though it seems more likely than not that the meeting would have been mentioned to Trump, especially given that this gathering had been put in motion by Trump’s business partner in Russia. So at the time of these tweets, Trump could well have known that the Putin regime had informed his campaign that it was on his side and wanted to assist him secretly. But if Trump didn’t know, the issuance of these tweets demonstrate that Manafort, Trump Jr., and Kushner were allowing Trump to make claims about the Russia connection they knew to be false.

Manafort kept up the disinformation campaign. On July 27, he went on CBS This Morning and said of Russia, “We have no relationship.” He then turned to the issue of Clinton’s emails: “The real issue isn’t even the Democratic National Committee’s server being hacked; the real issue is her server.”

In the following months, Trump and his campaign stuck to this line. In each presidential debate, Trump dismissed the notion that Russia was behind the hack. After the election, he would not accept the US intelligence community’s assessment that Russia had mounted this operation to help him win the White House. He routinely referred to the Trump-Russia scandal as a “hoax” and “fake news.”

The Trump Jr. emails demonstrate that through this entire affair, Trump’s top advisers possessed direct inside information indicating Putin’s crew was willing to act clandestinely to boost Trump’s chances. Whenever they discounted the idea that Russia was plotting against Clinton to help Trump—or stood by when Trump did so—they were lying. More important, they were knowingly creating a smokescreen behind which the Putin operation could proceed.

Within criminal law—and it’s unclear if there are criminal implications to the Trump camp’s interactions with Russia—a person who helps a criminal conceal a crime, or who aids an escape or who even fails to report a crime, is known as an accessory after the fact. Trump Jr., Kushner, and Manafort helped keep Russia’s operation a secret. They did not report what they knew about its efforts to intervene in the 2016 campaign. They did not tell the public that they had evidence that the Russian government was trying to undermine the election. They blew no whistle. They were silent partners in Putin’s enterprise. They were co-conspirators.

With these emails, there is no longer any dispute: The Trump campaign shielded a foreign adversary that sought to destabilize American democracy. By doing so, Trump’s most senior advisers increased the odds Putin’s mission would be accomplished.