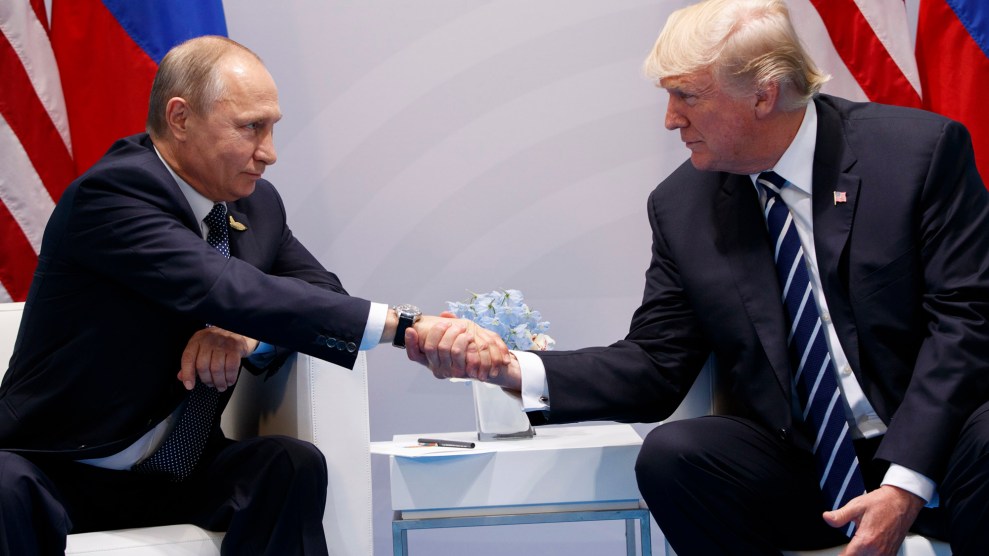 Here’s a point missing in much of the coverage of Donald Trump Jr.’s bombshell emails: If they are an accurate depiction of events, these messages show there was a conspiracy between the Putin regime and the Trump camp that was exceedingly simple and compact and quite easy to implement. The apparent plot—yes, it was a secret plot—involved a small number of people: three of Donald Trump’s closest advisers, a Trump business partner (and that man’s son), a Russian official close to Vladimir Putin, and two emissaries. Actually, none of this is surprising. Or complicated. You do not need Agent Mulder to get to the bottom of this.

Let’s start with Aras Agalarov. He is a billionaire developer in Russia in favor with Vladimir Putin, who in 2013 awarded him the Order of Honor for his construction work in Russia. Agalarov is also a business partner of Donald Trump. In 2013, he signed up with Trump to bring to Moscow the Miss Universe contest, which Trump co-owned at the time. That deal was brokered by Emin Agalarov, Aras’s son and a middling pop star, and Emin’s manager, a Brit named Rob Goldstone.

For years, Trump had tried to do hotel and condo projects in Moscow. All these endeavors had failed or fizzled. (Trump Vodka had flopped, too.) The Miss Universe event was his only successful venture there. It was good for the Agalarovs. The contest was held in Crocus City Hall, part of a large shopping and exhibition complex they own on the outskirts of Moscow, and they were able to raise their profile and promote their ritzy theater there. Emin, as part of the deal, got to perform two songs before a global audience, which he and Goldstone hoped would boost his career.

The event made at least $12 million for Trump’s Miss Universe Organization. Even better for Trump, the pageant forged a tight bond between him and Aras and Emin Agalarov. Trump appeared in a music video Emin released. The Trump Organization and the Agalarovs started working on a deal to bring a Trump tower to Moscow. In fact, as Yahoo News reports, Ivanka Trump traveled to Moscow shortly after the event to scout locations. Here is a photo Goldstone posted on his Facebook page of Ivanka meeting with Emin there:

And in the following years, there was steady contact between the Trumps and the Agalarovs—and Goldstone, too. Though no Moscow project materialized, there remained a relationship.

Come the campaign of 2016, it was no surprise that Emin and Aras Agalarov were pulling for their pal Donald. And it’s only natural they wanted to help.

According to emails released Tuesday by Trump Jr., on June 3, 2016—shortly after Trump had secured the Republican presidential nomination—Aras was in a meeting with Yury Chaika, the prosecutor general of Russia, who had been in the post since 2006. A few weeks earlier, Putin had recommended that Chaika serve another five-year term. Certainly, only a Putin-fancied official would be in this job. But this was a sign that Chaika remained in Putin’s good graces. (The previous year, a prominent Russian opposition activist had accused Chaika’s family of being involved in corruption and criminal activity.)

The Trump Jr. emails do not note how the meeting between Chaika and Aras Agalarov came about. But according to an email sent from Goldstone to Trump Jr., Chaika told Agalarov he could provide the Trump campaign “with some official documents and information that would incriminate Hillary” and that would be “very useful” for Donald Trump. This contact makes plenty of sense. If the Russian government wanted to help Trump win the presidency by passing his campaign dirt on Hillary Clinton, the natural go-between would be Aras Agalarov, who had been Trump’s business colleague. Agalarov could go straight to the source.

And apparently he did. According to the Trump Jr. emails, Aras Agalarov made the obvious play. He had Emin ask Goldstone to contact Trump Jr. Emin’s manager then emailed Donald Trump Jr. and told him about the Agalarov-Chaika meeting and added, “This is obviously very high level and sensitive information but it is part of Russia and its government’s support for Mr. Trump – helped along by Aras and Emin.”

Nothing complex here. A Putin official seems to be collaborating with Trump’s business partners to get Trump negative material on Clinton.

Next, Trump Jr. seems to have a phone call with Emin, and a meeting is scheduled for a few days later in Trump tower where Trump Jr. will meet with what one email describes as a “Russian government attorney.”

Trump Jr. then widens the cabal by informing Jared Kushner and Paul Manafort about this operation, and they are added to the meeting. An email forwarded to them about the get-together has the subject heading: “Russia – Clinton – private and confidential.” On June 9, the meeting occurs.

It only took three days for this plot to zip from the discussion between Chaika and Aras Agalarov to the inner circle of Trump’s campaign. Trump Jr. says nothing came out of the conversation between the Trump advisers and the Russian lawyer, claiming she spoke only in vague and meaningless terms. But given that the president’s son has repeatedly dissembled about this episode, there is no telling if this description can be trusted. (The lawyer, Natalia Veselnitskaya, has denied working on behalf of the Russian government or conveying negative information about Clinton.)

This is what ought to register: The scheme appears to have been put into play by a Putin regime official and a Putin-friendly oligarch who was Trump’s business partner in Russia—and Trump’s son, son-in-law, and campaign manager all joined in. (A pop singer, a Russian lawyer, and a talent manager all had supporting roles.) Trump Jr., Kushner, and Manafort were looking to collude with a foreign power to gain an advantage in the election—an allegation the Trump team has repeatedly and passionately denied.

This is not Alex Jones stuff. This was straightforward conniving. Moreover, this is reality within the part of the universe where Trumpland overlaps with Putin’s world. It was a conspiracy, pure and simple. The obvious question now is: Are there any others to uncover?