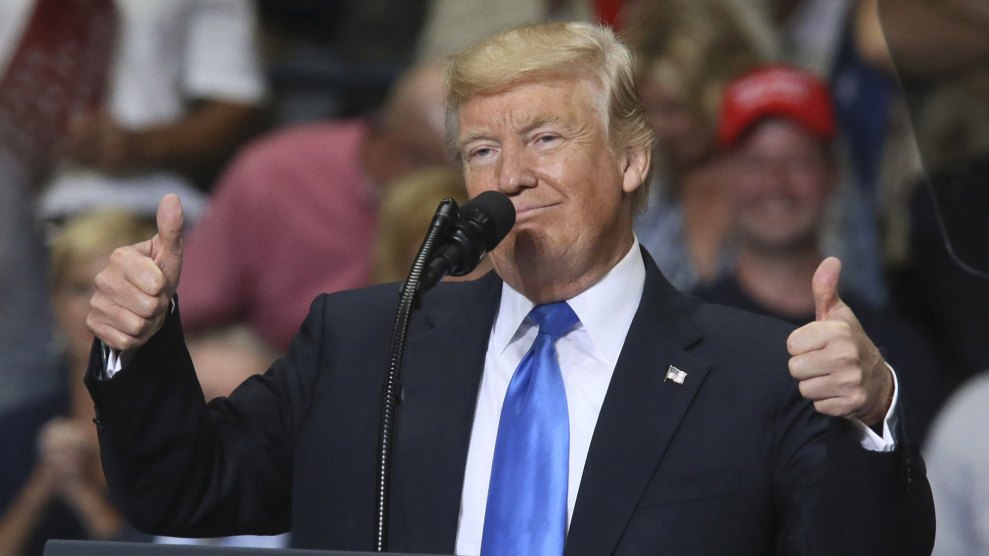 This is what it looks like when things are going badly for President Donald Trump. Six months into his first term, his administration has no major legislative accomplishments, his approval ratings are plunging, and federal investigators are buzzing around his inner circle. So, eager for adulation from his fans, Trump held a campaign rally in Youngstown, Ohio, Tuesday night. He tore a page straight out of the nativist cookbook:

They don’t want to use guns because it’s too fast and it’s not painful enough. So they’ll take a young, beautiful girl, 16, 15, and others, and they slice them and dice them with a knife because they want them to go through excruciating pain before they die. And these are the animals that we’ve been protecting for so long. Well, they’re not being protected any longer, folks.

That is why the administration is launching a nationwide crackdown on sanctuary cities. American cities should be sanctuaries for law-abiding Americans, for people that look up to the law, for people that respect the law, not the criminals and gang members that we want the hell out of our country.

Elsewhere in the speech, Trump boasted that the federal law enforcement officers carrying out his immigration raids were “not doing it in a politically correct fashion”:

We’re doing it rough. Our guys are rougher than their guys. I asked one of our great generals, “How tough are our people? How tough are they?” He said, “Sir, you don’t want to know about it.” Then I saw one guy come out, a customs officer who is a monster. I said, “So general, you think I could take that guy in a fight?” He said, “Mr. President, sir I don’t even want to think about it.” I said, “You’re right, actually.” We have tough people. Our people are tougher than their people. Our people are tougher and stronger and meaner and smarter than the gangs.

You could say it sounded better in the original German, but it’s a fully American construction. Detailed descriptions of horrific (but unspecified) crimes committed by non-white “animals” against young female victims have been a staple of nativist and white supremacist rhetoric for centuries. Trump didn’t explain how such crimes justify using state violence to hunt down and break up immigrant families, many of which have lived in and contributed to their communities for years—because that was besides the point. He was playing to fear, not reason.

On Wednesday morning, Trump followed up his campaign rally by announcing on Twitter that transgender Americans would not be allowed to serve “in any capacity” in the military. Trump said the decision came after consultation with “my generals,” but during the final year of the Obama administration, the Department of Defense had recommended allowing transgender Americans to serve openly. Trump’s Secretary of Defense, former Marine general James Mattis, testified during his confirmation hearings that he had no intention of reinstating the ban. In an interview with a reporter from Axios, an administration official gave away the game—the point of the policy was to hurt Democrats’ electoral prospects.

At this point, the idea of a maturing, pivoting Trump sounds foolish. (In truth, it always was.) But that doesn’t mean Trump can’t change. As his prospects grow bleaker and bleaker, the last 12 hours suggest his cultural power plays may grow darker and darker, too.