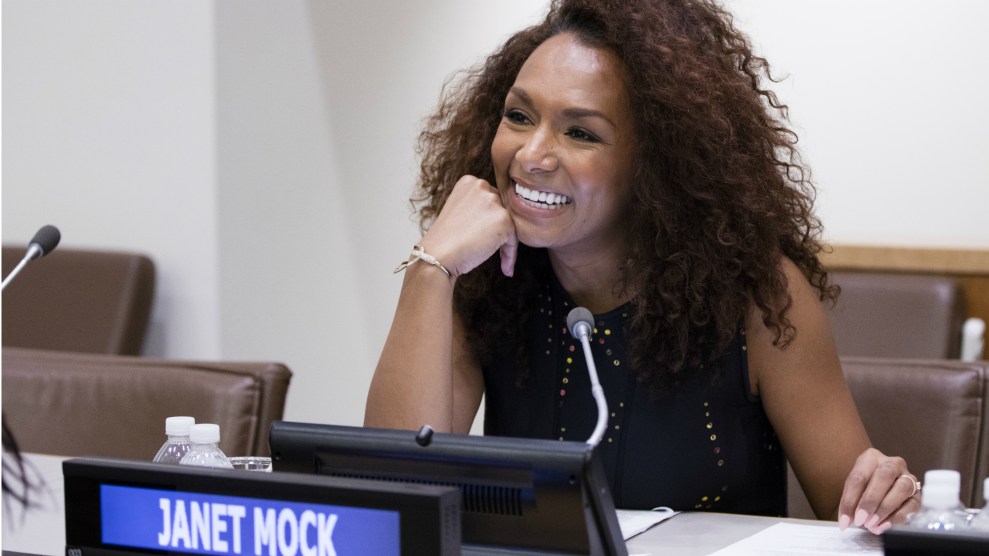 On a recent morning on hip-hop’s most popular AM radio show, The Breakfast Club, a rapper named Lil’ Duval told the hosts that he’d “probably want to kill” a woman if she “tricked him” by failing to come out to him as transgender before they had sex. “This might sound messed up and I don’t care,” Duval said. “She dying. I can’t deal with that.” The three hosts—DJ Envy, the everyman; Angela Yee, the only female host and, by design, often its most conciliatory; and Charlamagne tha God, often pegged as the villain for asking his guests the questions they don’t want to answer—laughed in response and DJ Envy pointed to the cover of a book in the studio, Surpassing Certainty.

It is the second memoir from best-selling author Janet Mock—the mini-media mogul who hosts the popular podcast Never Before, judges televised beauty contests, writes a column at Allure, and once hosted a pop culture MSNBC show called “So POPular!” Surpassing Certainty was on hand because Mock, a transgender black woman, had been a guest on the same show just days before. It was the final stop on her tour for the book, which chronicles the ups, downs, and heartaches of her 20s. On the show, Mock told her truth. She answered hard questions. And she laughed. After all, it’s her megawatt smile, set against her smooth brown skin and curly mane, that are essential parts of her appeal.

The appearance, though, would soon force Mock into the unpaid labor of playing defense for a community under siege.

The incident, though, was not just cruel and insensitive. It also exposes the deep fissures that exist between old and new media—as well as the possibilities created by those breaks.

The show seemed like the best and worst place for Mock to share her truth. The Breakfast Club features interviews with hip-hop’s biggest names and has woven itself so deeply into the hearts and listening habits of black America that people of political consequence have appeared on the show to court its black viewers. Hillary Clinton even paid a visit days before the 2016 presidential election and revealed that she too keeps a bottle of hot sauce in her purse (a level of pandering that was mocked mercilessly afterward).

The show is syndicated in more than 50 markets around the country and airs every morning on Sean “Puffy” Combs’ digital cable network, Revolt. But the show’s real innovations have been online. Every interview is recorded live, on camera, and then released to the broader public; The Breakfast Club now  has more than 1.3 million subscribers on YouTube—an online presence that might outstrip its live listeners.

The power of these videos is evident in certain moments that have broken into and even changed mainstream conversation. Beyond Clinton, the most notable moment might have been when Kanye West told the hosts that he had to “take 30 showers” after dating ex Amber Rose, a woman who is not afraid to recount, with joy, her past as an exotic dancer. This single interview ended up launching a much broader conversation of real social consequence. It provoked so much outrage for its so-called “slut-shaming” that Rose used it to launch a campaign to advocate women’s sexual agency. Since 2014, she’s hosted “Amber Rose’s Slut Walk Festival,” a several-day annual event of marches, breast cancer screenings, and HIV testing; an estimated 15,000 people have attended.

The Breakfast Club, though, also bills itself as the “World’s Most Dangerous Morning Show,” and it genuinely can be for people who fall outside of American culture’s strictly enforced gender norms. Its hosts once vilified a black transgender woman named Sidney Starr, notorious for her relationship with rapper Chingy. This kind of vilification is nothing new in hip-hop, and though a new generation of gender-bending stars have gained mainstream popularity—think Young M.A., the masculine-of-center female rapper who’s earned the respect of some of the culture’s enduring stars; or Tyler, the Creator, rap’s consummate bad boy who has revealed that he’s queer; or Young Thug, who wore a billowing purple dress on his debut album Jeffrey—Jay-Z still lamented the culture’s “old heads” for their curmudgeonly ways toward the up-and-comers by rapping, “Stop acting brand new/ like 2pac ain’t have a nose ring too.”

In the most charitable interpretation, the appearance opened up a long-needed conversation about the apathy and cowardice that allows those mindsets to go unchecked.

Perhaps, then, it’s no surprise that the video of Lil’ Duval’s Breakfast Club appearance went viral. In the least charitable interpretation, the exchange exposed the lethal mindsets that are literally killing transgender women. In the most charitable, the appearance opened up a long-needed conversation about the apathy and cowardice that allows those mindsets to go unchecked—even if it did so unintentionally. Mock crafted her own response to the incident in Allure, for which she serves as a contributing editor. “It’s this deplorable rhetoric that leads many cis men, desperately clutching their heterosexuality, to yell at, kick, spit on, shoot, burn, stone and kill trans women of color,” she writes.

Mock, notably, wasn’t alone in her outrage. Black Twitter, at least for the most part, had her back.

Black Twitter, to put it simply, is the platform’s committed and incisive community of black users, as well as the place that has anointed “Auntie Maxine Waters” as Donald Trump’s key congressional adversary and has, in the past, taken on a diverse set of targets: the New York Times, white supremacy, the Kardashian/Jenners, Denzel Washington, the patriarchy, and the Oscars, just to name a few. It has also provided a wellness check for black women with the hashtag #YouOkSis and helped launch a movement with #BlackLivesMatter.

So when it stepped in this week to denounce The Breakfast Club, it became a sterling example of how so-called “new media” has been instrumental for communities that have long been ostracized. Transgender women of color like actress Laverne Cox used the platform to voice their disgust.

Good morning – #BreakfastClubBoycott it's way past due. The time to decide where you stand is now.

Over 80% of murder Trans people in the U.S. are women of color. #boycottbreakfastclub

Some Black Twitter users—specifically, black transgender women and their allies—took the #BreakfastClubBoycott to the next level and confronted one of the show’s hosts, Charlamgne tha God, in real life during a speaking events at Politicon.

@cthagod you still said "if they were a guy"… @janetmock explained all this to you. #MSNBC #Politicon #Transgender #BoycottBreakfastClub pic.twitter.com/ADKE56Hvki

But still, other users seemed bothered that people were calling for the boycott of one of America’s most beloved black media spaces.

#BoycottBreakfastClub won't happen. The Breakfast Club is here to stay until there is no radio airwaves. Y'all stay mad at something stupid

So blk folk is talking about #BoycottBreakfastClub but won't boycott the companies who are silent on white supremacy or police brutality.. pic.twitter.com/kK2jWe9QHO

What became clear in this back-and-forth is the degree to which social media has become a corrective to the hurtful and biased narratives of communities that are underrepresented within underrepresented communities. The black community itself is not a monolith, and the emergence of transgender women of color advocating against systemic racial, gender, and class oppression is proof.

The black community itself is not a monolith, and the emergence of transgender women of color advocating against systemic racial, gender, and class oppression is proof.

Amid the uproar, Charlamagne released a statement late last week denouncing violence against transgender women. “We don’t condone those kind of hate crimes at all,” he said, before digging into the deadly statistics of transgender women who’ve been killed already in 2017. Without saying it explicitly, he was conceding to having had a hard learning moment—all while not directly acknowledging the Lil’ Duval saga. “The Breakfast Club will continue to do what it always does and that provides a platform for the voiceless,” he said.

Above all, it’s important the story has reached far beyond the closed circle of its users and critics and into New York Magazine, Ebony, and even TMZ. For one week in pop culture, the broader world was talking about the hateful rhetoric that so often kills transgender black women who, by almost every measure, are among society’s most vulnerable populations.

Meanwhile, in a cruel and perverse way, Mock did exactly what she set out to do. In Allure, she writes that she was reluctant to go on the show in the first place because she could foresee something precisely like what later took place.

“I was hopeful that I could use the show’s vast platform to speak directly to their predominantly black and Latinx listeners, who are often excluded from the conversations held in mainstream LGBT spaces (which are largely white, moneyed, and concerned with the centering of cis folk),” she explains. “I hoped I could make listeners aware of the lived realities of their trans sisters, and let them know that we deserve to be seen, heard, and acknowledged without threat of harassment, exclusion, or violence.”

And with the help of those very trans women on social media, that mission was accomplished.