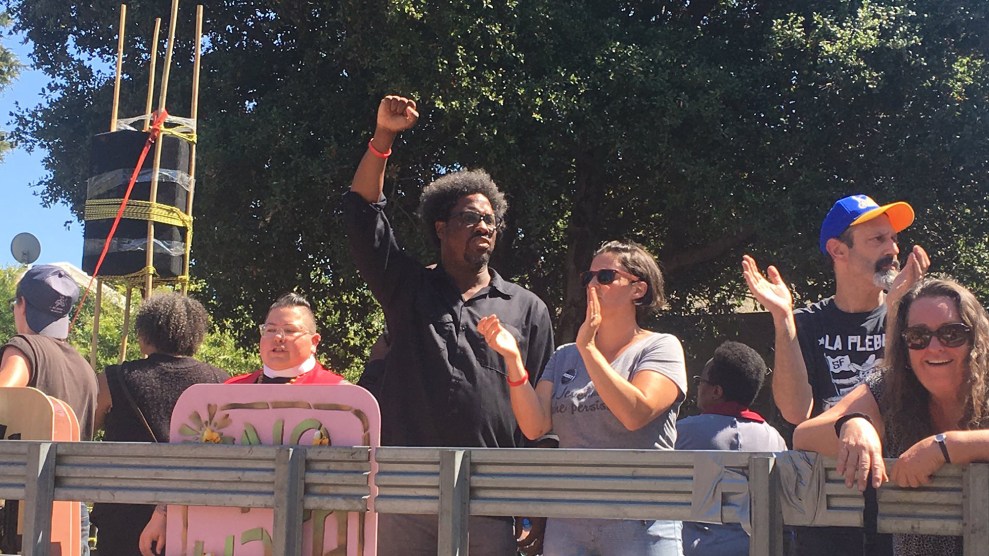 Comedian W. Kamau Bell and others celebrate in Berkeley on Sunday.Madison Pauly

Right-wing rallies planned for San Francisco largely fizzled on Saturday, but thousands of counterprotesters filled the streets, demonstrating against hate. Today, all eyes turn to Berkeley. As we explained last week:

[O]n Sunday, August 27, an estimated 300 people are supposed to descend on an anti-communist rally, known as “No to Marxism in America,” in Berkeley’s Martin Luther King Jr. Civic Center Park. The online event’s organizer, Amber Cummings, recently decried white nationalists and called for nonviolent demonstrations; she posted on Facebook, “I myself am a transsexual female who embraces diversity and loves diversity. This event is not a event of hate speech.” Even still, politicians and city officials have expressed concern that the rally could attract far-right agitators, particularly as the location was the site of clashes between right-wing groups and counterdemonstrators earlier this year.

It’s unclear whether that event will actually happen. On Friday, Cummings released a statement saying, “I will be attending the event alone. I stress I DO NOT WANT ANYONE COMING and if they do you will be turned away.” Meanwhile, Joey Gibson, the organizer of Saturday’s unsuccessful right-wing “Patriot Prayer” rally, wrote yesterday that his group would descend on Berkeley on Sunday.

Regardless of what happens, counterprotesters are expected to be out in force. We’ve got reporters on the scene and will keep you up to date on the latest developments.

2:50 pm PT: The crowd, consisting of both antifa and everyday folks, has decamped from Berkeley’s Civic Center Park, marched a few blocks to Ohlone Park on Berkeley’s Northside, and declared victory. Things have calmed down, at least for now. And hey, look who’s at the barricades…

.@wkamaubell at head of celebration march back to Ohlone Park pic.twitter.com/WYwrKieuU5

Madison Pauly also has been talking with the medics:

This street medic came prepared to deal with blunt trauma #Berkeley
"People are more willing to swing a club than stab someone with a knife" pic.twitter.com/GEIuD7aYaH

Another Mojo reporter required their services:

"Take his camera, take his phone," they are shouting at a journalist. #berkeley pic.twitter.com/hvsQ5eXalE

The police are firing rubber bullets in #Berkeley. Blocks away, a couple with a young daughter were walking toward it. Stay away.

The #Berkeley police have stood down. A sea of black masks as far as I can see. This is what WAS NOT supposed to happen. pic.twitter.com/uqsFJqPqd7

March from Ohlone is stopped 2 blocks from Civic C, waiting for march from UC Berkeley Crescent to join. "We'll all take the park together." pic.twitter.com/iKRNBE2Mut

March of rally against hate continuing towards civic center to join other counter protestors at civic center pic.twitter.com/WYfnNEty2K

Hundreds in anti fascist march starting to leave Ohlone Park and march down Hearst. "1, 2, 1-2-3, Down with white supremacy." pic.twitter.com/hNkLyC9lVr

Chris with the National Lawyers Guild is one of more than 100 legal observers out if #Berkeley to monitor police for civil rights violations pic.twitter.com/faT2TZraDS

We have no words to add to this.

Right-wing activists seem to be vastly outnumbered by counterprotesters once again.

Everywhere the Trumpers try to give interviews to the news cameras in Berkeley, chants and loud whistles drown them out. pic.twitter.com/zR9JiCOt9D

Police are breaking up scuffles between Trump supporters and counterprotesters:

Counterprotesters are gathering for Berkeley’s Rally Against Hate.

Counter protestors gathering near UC Berkeley for the Rally Against Hate. "No hate, no fear, nazis get out of here." pic.twitter.com/YSqIZFZSze

A counter-protester gets in a Trumper's face to confront him, Trump supporter pivots to cameras to say this is evidence of leftist violence. pic.twitter.com/TiOCl7iAFw

More than 500 police officers are on hand to try to control the crowds and prevent the type of violence that happened in Charlottesville.

Gibson is still saying he plans to appear in Berkeley today…

Joey Gibson, organizer of yesterday's failed Patriot Prayer rally in SF, is promising to pop up in Berkeley this morning. pic.twitter.com/V4oMD8Ov3W

…residents of Berkeley, meanwhile, are making their views clear.

Sigh hanging above park in #Berkeley where rallies are scheduled for later today pic.twitter.com/OPP5VOvZ6h