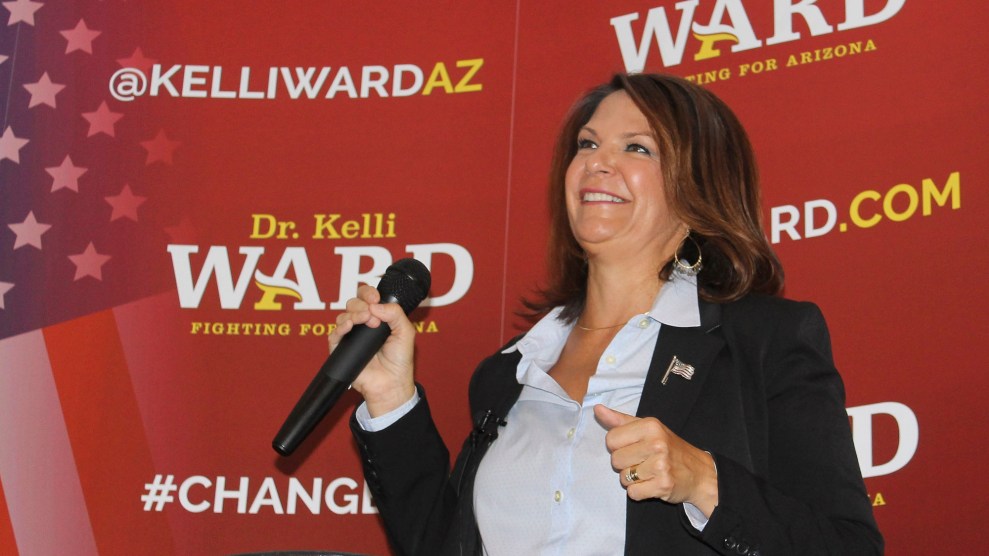 In early October, Arizona GOP Senate candidate Kelli Ward will be headlining a dinner at the annual convention of the Association of American Physicians and Surgeons in Tucson. Despite its dull name, AAPS isn’t some stodgy medical organization. It’s actually a fringe doctors’ group whose medical journal over the years has featured a host of discredited theories, including arguments that abortion causes breast cancer, HIV doesn’t cause AIDS, vaccines cause autism, and illegal immigrants caused a leprosy outbreak in the United States.

AAPS was the key source of internet rumors that Hillary Clinton was suffering from a major illness during last year’s presidential campaign. Years ago, it went to the US Supreme Court to demand the release of postmortem photos of former Clinton Deputy White House Counsel Vince Foster, who committed suicide in 1993. The group claimed it needed the photos to ensure Foster hadn’t been murdered, a classic anti-Clinton conspiracy theory.

“Great to see that Dr. Kelli Ward is running against Flake Jeff Flake, who is WEAK on borders, crime and a non-factor in Senate. He’s toxic!”

Ward, a former Arizona state senator, knows a thing or two about conspiracy theories. She’s perhaps most famous for holding a town hall meeting on chemtrails, those long plumes of condensation that appear behind jet planes, but which conspiratorially minded Arizonans believe are a government tool for spreading mind-control chemicals. The issue came up during the 2016 Senate primary campaign, when Ward unsuccessfully challenged Republican Sen. John McCain. Ward has said she doesn’t subscribe to chemtrail conspiracy theories and that the event was simply intended to address the concerns of her constituents.

Now Ward is hoping to unseat incumbent Republican Sen. Jeff Flake, a frequent critic of President Donald Trump, in the 2018 primary. She recently won praise from Trump, who tweeted, “Great to see that Dr. Kelli Ward is running against Flake Jeff Flake, who is WEAK on borders, crime and a non-factor in Senate. He’s toxic!”

A doctor, Ward has been critical of mainstream medical organizations that supported the passage of President Barack Obama’s Affordable Care Act. “The House of Medicine has sold me out,” she said last year, referring to groups including the American Medical Association, the nation’s largest doctors’ organization. Ward has been a regular attendee at meetings of the AAPS Arizona chapter, and the national AAPS endorsed Ward in her effort to defeat McCain. On the campaign trail, Ward said that AAPS is “the only group that represents physicians and patients.”

AAPS has also been waging a concerted battle to prevent state regulators and insurance companies from requiring that doctors maintain board certifications and keep their medical knowledge up to date through what are called Maintenance of Certification activities. The certification effort is intended to help improve the practice of medicine. But as a state senator, Ward introduced an anti-MOC bill that would have banned any program that received state funds, such as Medicaid, from requiring board certification or recertification as a condition of a doctor’s participation.

Founded in the 1940s, AAPS had ties to the right-wing John Birch Society and has been a steadfast foe of anything its members view as socialized medicine, including the creation of Medicare and Medicaid in 1965. Its statement of principles says that the effect of government health care plans “is evil and participation in carrying out its provisions is, in our opinion, immoral.”

For decades, the group toiled largely on the margins of the profession—until the tea party movement helped it rise to political prominence. In keeping with its history, AAPS actively opposed the passage of the Affordable Care Act, with member doctors often appearing at rallies on Capitol Hill in white lab coats. One AAPS member active in the anti-Obamacare campaign made headlines by circulating a photo of President Barack Obama dressed as an African witchdoctor, with a loin cloth and a bone through his nose. That same doctor, Florida neurosurgeon David McKalip, will speak at the convention where Ward is slated to appear in October.

Ward isn’t the only politician to associate with AAPS. Its members have included former Rep. Tom Price (R-Ga.), now Trump’s Secretary of Health and Human Services, and Kentucky Senator Rand Paul (R). And with Ward leading Flake by wide margins in a couple of recent polls, the fringe medical group could soon have another supporter in Washington.