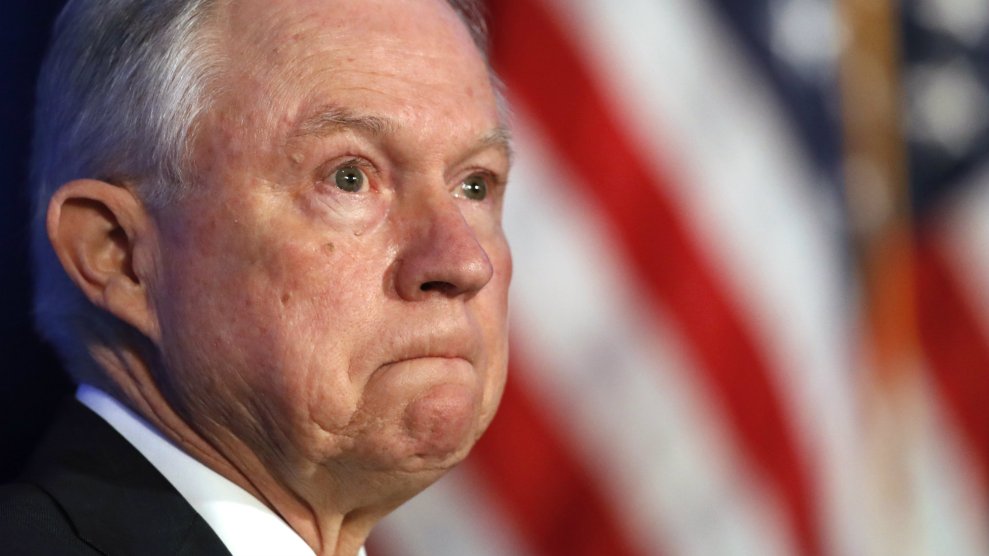 In a speech Tuesday, in Atlanta, Attorney General Jeff Sessions assured black law enforcement officials that the Justice Department would work to hold officers accountable for abuse and misconduct. Sessions noted that “only 30 percent of African Americans say that they have confidence in police,” referring to a recent Gallup poll. “That means African Americans have the least trust in police of any group in the United States.” He added: “We all know the cases of the last several years where, in confrontations with police, lives have been cut short. Just as I am committed to defending law enforcement who use deadly force while lawfully engaged in their work, I will also hold any officer responsible breaking the law. You and I know that all it takes is one bad officer to destroy the reputations of so many who work day in and day out to build relationships in these communities and serve with honor and distinction.”

WATCH: AG Sessions tells black law enforcement officials he will prosecute police who violate rules on use of force. https://t.co/V4TZBC3AYS

But Sessions’ remarks at the National Organization of Black Law Enforcement Executives’ annual conference in Atlanta stand in contrast with steps he’s taken as attorney general to roll back federal oversight of local police departments. In April, he ordered a review of all reform agreements reached between the Justice Department and local and state police departments—often the result of problems with excessive use of force—noting in a memo to DOJ staff that “it is not the responsibility of the federal government to manage non-federal law enforcement agencies.” Days later, DOJ attorneys attempted to block a consent decree negotiated between the Obama administration and the Baltimore Police Department, though a federal judge approved the agreement. The DOJ also declined earlier this year to seek federal charges against officers who killed Alton Sterling in Louisiana in 2016, and John Crawford in Ohio in 2014, though police experts note that it’s difficult to prove wrongdoing in such cases and that charges were rare even during the Obama administration.

In July, Sessions announced that federal law enforcement would expand the use of civil asset forfeiture, a practice whereby police seize property and cash from individuals if they believe those assets to be connected to illegal activity; civil rights advocates warn that policy could encourage corruption and abuse among police.

Police departments around the country have distanced themselves in recent days from remarks President Trump made to police officers in Long Island in which he appeared to encourage officers to use excessive force against people they arrested, praising them for being “rough” with suspects. On Monday, White House Press Secretary Sarah Huckabee Sanders said during the daily press briefing that she believed Trump was “joking” when he made the remarks. Sessions made no mention of Trump’s remarks during his speech on Tuesday.

This year’s NOBLE conference came against a starkly different political backdrop. Last July when it was held in Washington, DC, then Attorney General Loretta Lynch delivered a speech just a day after three officers were killed in an ambush-style attack in Baton Rouge, Louisiana, by a gunman who was upset about police killings of black men. Lynch addressed the unique experience of being black and a police officer; she also spoke to the importance of efforts by the Obama administration to improve federal oversight of law enforcement nationwide. Lynch gave the speech while introducing her predecessor, Eric Holder, who served as the nation’s first black attorney general and received an award from the organization for his civil rights work as America’s top law enforcement official.