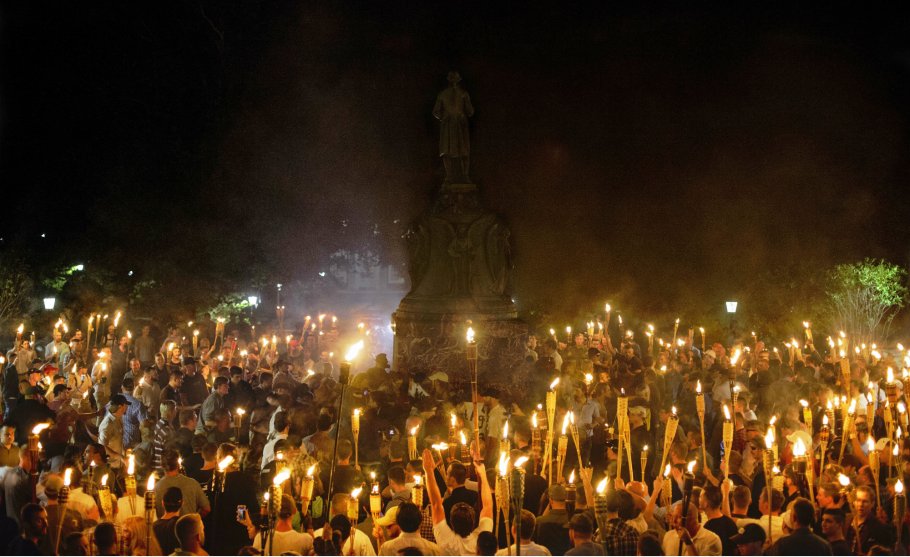 After the white nationalist rally in Charlottesville, Virginia, that left one woman dead and 19 injured, internet vigilantes and activists have been combing through photos to identify the people who attended. Cole White resigned from his job at Top Dog, a libertarian hot dog restaurant in Berkeley, California, after he was identified and it was “inundated with inquiries” about his employment.

With white supremacist voices growing louder, identifying and publicly shaming them has become one avenue of vigilante justice. Many on social media have been applauding the effort to hold rally-goers accountable, arguing people don’t get to be a “weekend Nazi” and not face the consequences of their actions. Paradoxically, these activists sometimes use the same tools as online harassers who have targeted feminists, people of color, and others in a tactic known as “doxxing,” where personal information such as addresses and telephone numbers are released as a way of digital harassment. By doing so, they have have raised new questions about the ethics and strategy of publicly shaming white supremacists.

Soraya Chemaly of the Women’s Media Center, who works to combat doxxing, draws a distinction between the recent vigilante activism and harassment online. “Emotional trauma and harm happen and the terroristic threat represented by a white supremacist march needs to be recognized,” she tells Mother Jones. Hate speech can cause trauma, but perpetrators are generally not subject to any of the legal consequences faced by those inflicting physical violence. “If you dox someone who is actively threatening your existence and dehumanizing you,” she says, “it becomes a matter of your own humanity and self defense.”

Most of the public shaming should not be defined as doxxing, says Jaclyn Friedman, who founded Women, Action & the Media (WAM!). White nationalists were public about their beliefs when they attended the rally and, therefore, publicly identifying them “doesn’t seem particularly like an invasion of privacy,” Friedman says. “If you stand for that stuff, stand for it, and if there are consequences to that, your employer fires you, then boo-hoo.” Sharing their images is one thing, Friedman says, but publishing personal information such as an address, phone number or social security number crosses the line to doxxing.

Anti-harassment experts note that those targeted by white supremacists have few options for protection. For example, Friedman says, the Charlottesville police refused to provide protection to worshippers at a synagogue during the rally while armed white nationalists walked the streets directly outside. “We know in Charlottesville, the police certainly didn’t seem to care,” she says. “Those institutions are not keeping us safe.”

There are few ways to hold individuals accountable beyond public shaming, Friedman says, and steps local governments and activists can take to push back against the normalization of violent rhetoric. “It’s about finding those things, community by community, that are giving comfort to white supremacists and removing those comforts,” she says. She points to the efforts to take down Confederate statues as an example eliminating such a comfort. Friedman suggests that there should also be clear constraints on the freedom white nationalists enjoy when operating on social media. The lack of censorship has continued for such a long time, she explains, it has made “them comfortable to keep operating.”

“A lot of these folks aren’t necessarily card-carrying members of a certain institution that then can be held accountable…a lot of these guys are almost freelancing their hate out in the world. ”

Part of the difficulty in holding white nationalists and supremacists accountable is they are often not affiliated with a formal organization. Deanna Zandt is on the board of directors of WAM! and has worked with Friedman to push social media platforms take online harassment and hate speech more seriously. “A lot of these folks aren’t necessarily card-carrying members of a certain institution that then can be held accountable,” Zandt said. “It’s very free-wheeling, and a lot of these guys are almost freelancing their hate out in the world, and that makes it…much more challenging.”

Many online harassment experts emphasize that online sleuths need to be incredibly careful not to misidentify someone, pointing to the instances where this has already happened. Kyle Quinn was incorrectly identified as a white nationalist attending the rally, resulting in calls for him to lose his job. His home address was also posted on social media and he stayed with colleagues over the weekend out of fear for his safety. One option for those who are attempting to publicly shame white supremacists, says online harassment researcher Caroline Sinders, is to share their research with professional fact-checkers. Getting it wrong can ruin someone’s life or put them in harm’s way. “Verify whose in those photos by getting someone else to verify it,” she says. “Get a journalist to fact-check it.”

Sinders explains citizen activists are grappling with how best to respond to white supremacists in real time, especially when it feels as if “the systems we have, the infrastructure we have, won’t do anything. That’s the place we’re at and those are the questions we’re sussing out.”