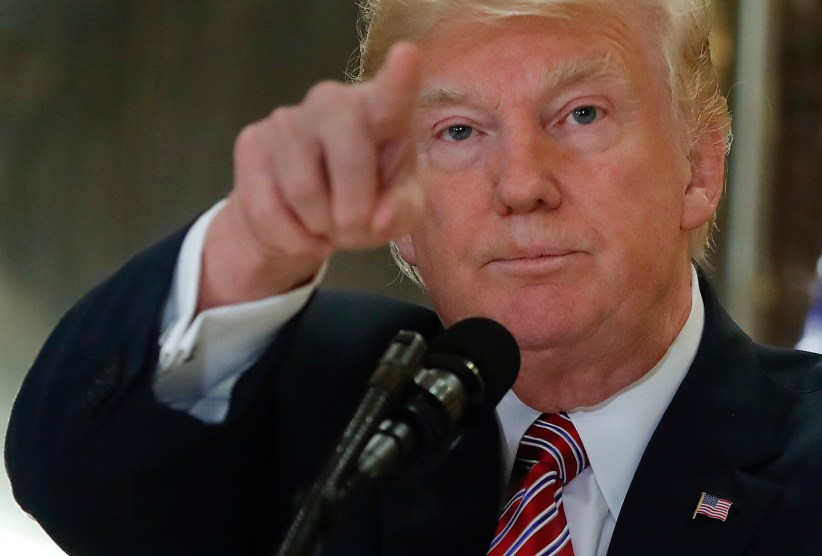 President Donald Trump is nothing if not a master of distraction. His itchy Twitter finger and his pugnacious ad-lib rallies and news conferences regularly produce news bombshells that dominate the headlines.

As crises both national and international have set in this month, Trump has been on a tear, from his comments blaming “both sides” for the deadly white supremacist violence in Charlottesville, Virginia, to his brazen pardon of Arizona Sheriff Joe Arpaio as Hurricane Harvey bore down on Texas. Somewhat lost in the fire and fury (literally) has been a series of consequential developments concerning the multiple ongoing investigations into Team Trump’s ties to and possible collusion with Russia.

Perhaps the biggest of the bunch: On August 27, the Washington Post reported that Trump was actively pursuing a deal to build a “massive” Trump Tower in Moscow while campaigning for the presidency. And the New York Times exposed a series of emails between Trump’s business associate Felix Sater and his lawyer Michael Cohen, in which Sater boasted about how the Moscow deal could help Trump win the White House. “Our boy can become president of the USA,” Sater wrote, “and we can engineer it.”

Here are some of the other Russia investigation-related developments you may have missed in recent weeks:

Probing Trump’s knowledge of the June 2016 meeting (August 28): NBC News reports that Mueller’s team is “keenly focused” on what President Trump himself may have known about the infamous June 2016 meeting in Trump Tower between Russian operatives and Donald Trump Jr., Jared Kushner, and Manafort—and whether the president may have tried to help conceal that meeting’s purpose once it was uncovered by the media.

Congress and the FBI dig deeper into the dossier (August 22): Glenn Simpson, the founder of opposition research firm Fusion GPS, which hired Christopher Steele to compile the Trump-Russia dossier, meets with the Senate Judiciary Committee in a nearly 10-hour closed-door session to answer questions about the financing and sourcing for the dossier. ABC News reports that Steele has already met with FBI investigators and provided them with the names of his sources for the dossier’s allegations.

Deeper Kremlin ties seen in Trump Tower meeting (August 21): The New York Times reports that Rinat Akhmetshin, a Russian immigrant who attended the July 2016 Trump Tower meeting, has much deeper ties to the Russian government and Kremlin-supported oligarchs than was previously known. The Times also reports that Akhmetshin, who is being investigated by Mueller, has worked for Russian oligarchs whose opponents faced sophisticated hacks. Akhmetshin’s sister, father, and godfather worked for Russian intelligence services, but Akhmetshin has denied allegations that he is a Russian spy.

Ivanka’s friendship with an oligarch’s wife (August 18): Bloomberg reports on the friendship between Ivanka Trump and Dasha Zhukova, the wife of Russian billionaire and Putin ally Roman Abramovich. Bloomberg notes that Ivanka’s husband, Jared Kushner, has met multiple times with Abramovich, and that Trump and Kushner disclosed their ongoing social relationship with the couple—which included a four-day trip to Russia in 2014 at Zhukova’s initiation—on their security clearance forms.

Russian hacker becomes FBI witness (August 16): The New York Times reports that a Ukrainian hacker known as Profexer—whom American intelligence agencies have identified as the creator of a program used in Russian hacks targeting the US election—has turned himself over to the Ukrainian police and become a witness for the FBI. “It is the first known instance of a living witness emerging from the arid mass of technical detail that has so far shaped the investigation into the election hacking and the heated debate it has stirred,” notes the Times.

Emails confirm outreach to Russia (August 14): The Washington Post reports on a set of Trump campaign emails showing persistent efforts by campaign foreign policy adviser George Papadopoulos to coordinate a meeting between Trump and Russian leaders, including Putin. The Post reports the emails were sent between March and September 2016, as the presidential race heated up; they were included in more than 20,000 pages of documents the Trump campaign turned over to congressional committees investigating Russian interference in the 2016 election.

Global banks get subpoenaed (August 10): Bloomberg reports that Mueller’s team has sent subpoenas to global banks requesting transaction records and account information tied to Paul Manafort and several of his companies. A source tells Bloomberg that Mueller has reached out to Manafort’s son-in-law and a Ukrainian oligarch, hoping to convince Manafort to be more cooperative.

Trump’s latest bizarre praise for Putin (August 10): Taking a break from a vacation at his New Jersey golf club, Trump tells reporters he is grateful that Putin has expelled hundreds of US diplomats from Russia in response to US sanctions. “I want to thank him because we’re trying to cut down our payroll and as far as I’m concerned I’m very thankful that he let go of a large number of people because now we have a smaller payroll,” Trump says. Following outrage over Trump’s comments, press secretary Sarah Huckabee Sanders tells the New York Times that the president’s remarks were “sarcastic” and meant to be funny.