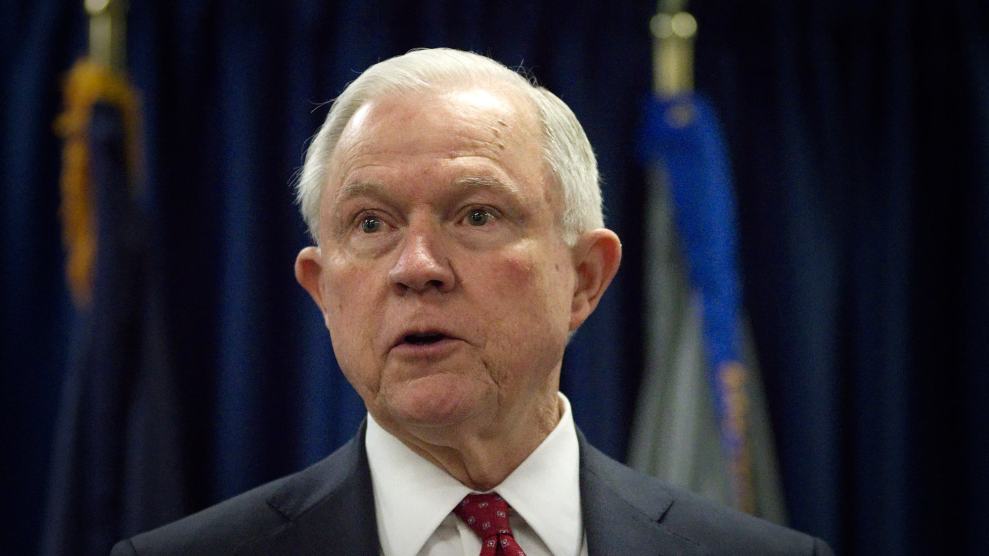 The Trump administration redoubled its support on Monday for efforts to remove people from voter registration rolls, siding with the state of Ohio in a case that could allow states to cancel registrations for voters who fail to cast a ballot over the course of several elections.

The Justice Department released an amicus brief in the case, currently before the Supreme Court, over whether Ohio can continue to remove “infrequent voters” who fail to cast a ballot over a six-year period. One of those voters, Larry Harmon, is a lead plaintiff in the lawsuit brought by Demos and the ACLU of Ohio. The 60-year-old software engineer and Navy veteran voted in 2008 and then returned to the polls for a local referendum in 2015, only to find that he was no longer registered, even though he hadn’t moved or done anything else to change his status.

The brief is not the administration’s first action that could lead to voter purges. On June 28, the same day President Donald Trump’s election integrity commission asked for sweeping voter data from all 50 states, the Justice Department sent a letter to 44 states informing them that it was reviewing their voter list maintenance procedures and asking them how they planned to “remove the names of ineligible voters.”  Vanita Gupta, the head of the department’s Civil Rights Division under President Barack Obama, called the letter “virtually unprecedented” and “a prelude to voter purging.”

In the Ohio case, a federal appeals court ruled in September that that state had violated the National Voter Registration Act, a 1993 law that made it easier to register at the DMV and other public agencies and stipulated that voter-roll maintenance “shall not result in the removal of the name of any person from the official list of voters registered to vote in an election for Federal office by reason of the person’s failure to vote.” As a result of that ruling,  7,500 people who would have otherwise been purged were able to vote in the 2016 election, including Harmon.

The Obama administration backed that position, but the Trump administration has now reversed course. “After this Court’s grant of review and the change in Administrations, the Department reconsidered the question,” says the Justice Department’s new brief. “It has now concluded that the NVRA does not prohibit a State from using nonvoting as the basis for sending a [removal] notice.” Notably, no career lawyers from the Civil Rights Division signed the brief, as is customary, potentially signifying internal opposition to the department’s new position. (The same thing happened with the Justice Department’s recent opposition to affirmative action on college campuses.)

Ohio has purged 2 million voters from 2011 to 2016, more than any other state, including 1.2 million for infrequent voting. At least 144,000 voters in Ohio’s three largest counties, home to Cleveland, Columbus, and Cincinnati, were purged since the 2012 election, with voters in Democratic-leaning neighborhoods twice as likely to be removed as those in Republican-leaning ones, according to a Reuters analysis.

These purges can have a big impact in a close election. During the 2000 election, Florida wrongly labeled 12,000 registered voters as ex-felons and scrubbed them from the voter rolls—a number that was 22 times George W. Bush’s ultimate 537-vote margin of victory. In 2004, the Ohio Republican Party sent a mailing to 232,000 newly registered voters, urging them to vote Republican. When 35,000 mailers were returned as undeliverable, the GOP tried to purge those voters from the rolls. The Democratic National Committee sued its Republican counterpart, and a federal court blocked the purge, ruling that voters “faced irreparable injury” to their “constitutional right to vote.”

Trump’s allies are taking aim at the National Voter Registration Act in other ways. A day after the election, Kansas Secretary of State Kris Kobach, vice chair of Trump’s election commission, wrote to Trump’s transition team and said he was preparing legislation to amend the NVRA to permit states to require  documentary proof of citizenship for voter registration.  In Kansas, that requirement has blocked 1 in 7 new voters from registering since 2013. Another member of Trump’s commission, J. Christian Adams, has also sued states under the NVRA to force controversial voter purges.

For 50 years, conservatives tried to weaken the Voting Rights Act. The NVRA, the country’s other major voting rights law, appears to be their new target.