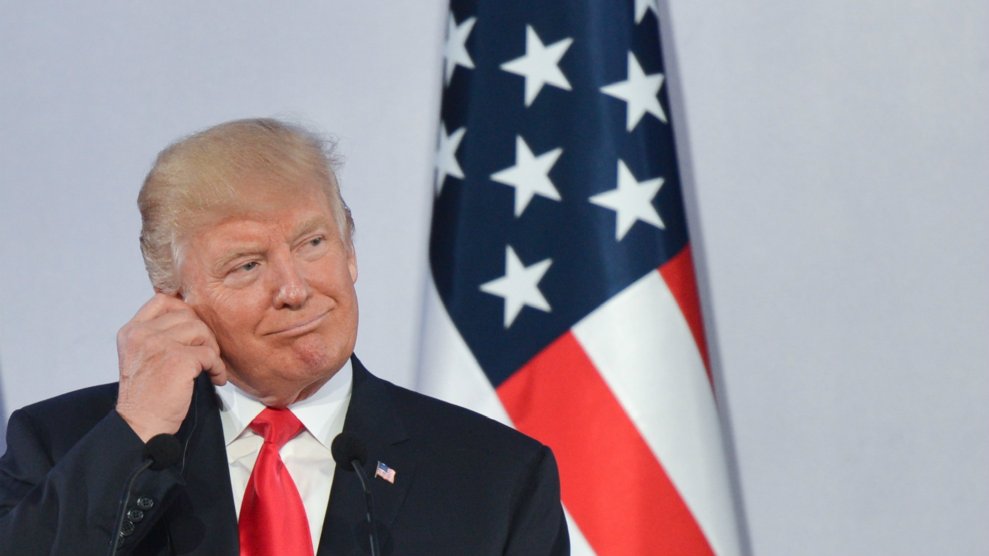 On Saturday, the Unite the Right rally of far-right extremist groups—including neo-Nazis and Ku Klux Klan members—turned into a violent brawl in Charlottesville, Virginia, with counterprotesters clashing with white nationalists. After a white nationalist intentionally rammed his car into a crowd, killing one woman and injuring 19 more people, President Donald Trump finally took the national stage and blamed “many sides” for the violence.

His remarks were immediately met with criticism for his seeming refusal to condemn neo-Nazis and white extremists. It was not until Monday that Trump held a press conference to offer a moderately stronger denunciation of violence by “white supremacists.”

Trump’s false equivalence speech on Saturday was, in many ways, not surprising. The president seems to have had a special relationship with white nationalists and other extremists beginning with his campaign. Twelve days after he announced his run for the presidency and pledged to build a wall to keep out immigrants, Andrew Anglin, publisher of the neo-Nazi site Daily Stormer, wrote, “I urge all readers of this site to do whatever they can to make Donald Trump President.” He hailed Trump as “the only candidate who is even talking about anything at all that matters.”

“I urge all readers of this site to do whatever they can to make Donald Trump President.” He hailed Trump as “the only candidate who is even talking about anything at all that matters.”

That was only the beginning, as these groups formed a crucial component of Trump’s base that helped him win the presidency. Here’s a look at some of the highlights of Trump’s relationship with white nationalists:

March and April 2011: Trump began making a name for himself as a conservative politician by becoming the biggest proponent of the racist conspiracy theory that Barack Obama was secretly born in Kenya. In 2011, Trump made multiple TV appearances alleging that Obama’s birth certificate would prove that he wasn’t born in the United States, a bogus theory championed by white nationalists. Obama released his birth certificate in April 2011.

August 2012: Refusing to back down, Trump tweets that Obama’s birth certificate is fake.

An 'extremely credible source' has called my office and told me that @BarackObama's birth certificate is a fraud.

Trump does not publicly acknowledge Obama was born in the United States until he was already the Republican nominee. In a September 2016 statement, he tried to blame the conspiracy on the Hillary Clinton campaign.

August 2015: David Duke, a former Imperial Wizard of the KKK and former state representative from Louisiana, described Trump’s announcement that he was running for president (during which he compared Mexican immigrants to criminals and rapists) as a “great thing,” though he acknowledged some concern about Trump’s ties to the Jewish community.

The next day, Bloomberg’s John Heilemann asked Trump about the “quasi-endorsement” and Trump responded by saying that he didn’t want or need endorsements. When Heilemann asked if he would repudiate Duke, Trump said, “Sure, I would do that, if it made you feel better.” This wouldn’t be the last time Duke would speak publicly about supporting Trump.

November 2015: Trump retweeted a graphic falsely claiming that black people are responsible for 81 percent of white homicides. Its source was a white supremacist Twitter feed.

January 2016: Trump retweets WhiteGenocideTM, a now-suspended Twitter user who promotes the idea that multiculturalism will lead to the extinction of the white race.

"@WhiteGenocideTM: @realDonaldTrump Poor Jeb. I could've sworn I saw him outside Trump Tower the other day! https://t.co/e5uLRubqla"

February 2016: The 2016 Republican presidential primary was crowded and included more than a dozen candidates. On his radio show, David Duke once again says that while he doesn’t fully endorse Trump, he supports his candidacy and says that voting against Trump is “treason to your heritage.”

At a press conference the next day, a reporter asked how Trump felt about the “recent endorsement” from Duke. “I didn’t even know he endorsed me. David Duke endorsed me?” Trump responded. “Okay, all right. I disavow, okay?”

A few days later he told CNN’s Jake Tapper that he didn’t even know who Duke was, despite talking about him in various points since at least 1991.

The user, who has been suspended from Twitter, is a writer for a website that covers white nationalism and genocide.

July 2016: Trump tweets an image of Clinton next to the words “Most Corrupt Candidate Ever” inside the Star of David, evoking the anti-Semitic trope that Jewish people are corrupt and greedy. The image reportedly came from a white nationalist website. He later deleted the tweet.

August 2016: Trump taps Stephen Bannon to be his campaign chief. Bannon, who would later become the White House chief of staff, is the former chairman of Breitbart Media, which he once described as the “platform of the alt-right.” The outlet once had a section dedicated to “black crime.”

November 2016: During a postelection interview with Lesley Stahl on 60 Minutes, Trump offered this rebuke of white people committing hate acts in his name: “Stop it.” He has had stronger words for others including Nordstrom, a department store that decided to stop selling his daughter Ivanka Trump’s clothing line, and Mitch McConnell, who failed to repeal the Affordable Care Act.

My daughter Ivanka has been treated so unfairly by @Nordstrom. She is a great person — always pushing me to do the right thing! Terrible!

June 2017: The Trump administration announced that it would be restarting a $10 million grant program for “Countering Violent Extremism” and provide funding for a list of organizations that fight Al Qaeda and ISIS. Notably left off the list was Life After Hate, an organization dedicated to combating neo-Nazi groups.

“White Americans put you in office,” Duke tweeted at Trump on Saturday. It should come as no surprise that Trump’s reluctant disavowals and not-so-subtle dog whistles appeal to the alt-right and the assorted far-right groups that fall underneath that banner. White supremacists gathered in Charlottesville were chanting, “Heil Trump” between shouts of “White Lives Matter” and “You will not replace us.”

David Duke perhaps summed it up best when he spoke to those gathered in Charlottesville and said, “We are determined to take our country back. We are going to fulfill the promises of Donald Trump.”