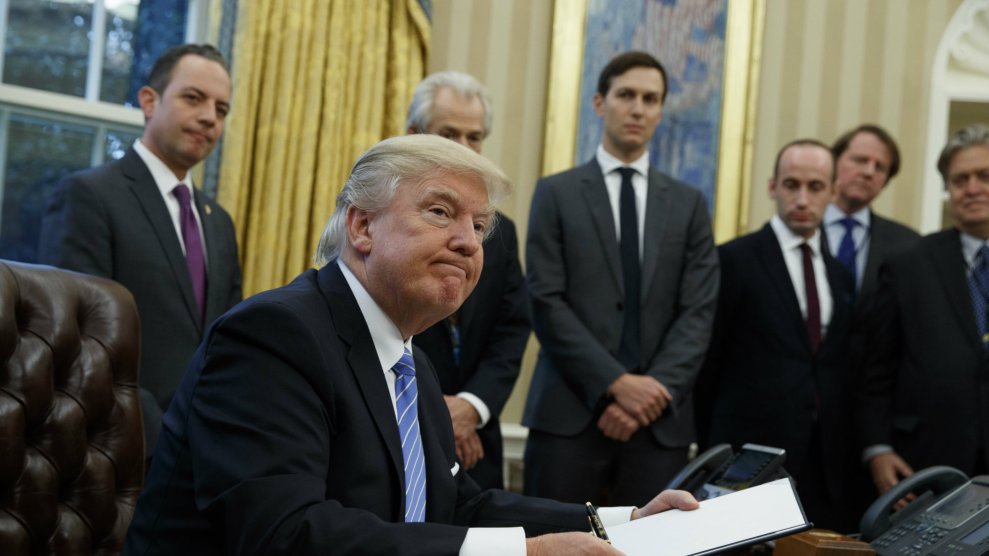 The Trump administration truly is a boy’s club. According to a new analysis conducted by the liberal Super Pac American Bridge 21st Century, 80 percent of the people the president has nominated for jobs that require Senate approval have been men. American Bridge shared the findings, based on congressional records, press releases, and freedom of information requests, with the Guardian.

“Without a significant shift, men will outnumber women four-to-one in top positions of the Trump administration,” writes the Guardian’s Molly Redden, a former Mother Jones reporter. Under Barack Obama and Bill Clinton, by contrast, roughly 40 percent of federal political appointments were held by women, according to a New York Times analysis of all appointees. Even during the George W. Bush administration, roughly one-third of appointees were women.

Advocates for diversity point out that having women in positions in power is about more than just filling a quota—it’s about making sure the perspectives of women are taken into account when developing federal policy on everything from health care to the economy. “Having that diversity helps bring new ideas and new thinking into government to make sure we’re not looking at policy through a narrowly focused lens shaped only by our own perceptions,” Don Gips, who worked as the head of personnel in the White House during the Obama administration, told the Guardian.

The Trump administration has indeed made a number of policy moves that appear to be hostile to women, such as revoking an Obama-era executive order designed to protect employees’ parental leave rights and combat pay discrimination. Trump has also signed legislation that is expected to significantly reduce Planned Parenthood funding in some parts of the country.

The findings from American Bridge are the latest in a series of reports illustrating just how male-dominated the Trump administration is. Earlier this month, Buzzfeed reported that only one of Trump’s 42 nominees for US attorney is a woman. Trump’s initial cabinet was “more white and male than any first cabinet since Reagan’s,” according to the New York Times. Also notably, none of the women in Trump’s cabinet are in the so-called “inner cabinet“: the secretaries of State, Defense, and Treasury and the attorney general. And when it comes to Trump appointees who don’t require Senate confirmation, men outnumbered women by a ratio of 3-to-1, according to an analysis Bloomberg published in March.

The Trump administration is on track to give women fewer opportunities in top government positions than any other administration in nearly 25 years. But the administration has been extremely slow to make political appointments, and there are still plenty of positions left to fill—of the 1,200 that need senate approval, Trump has only nominated candidates for 408.

On the campaign trail, Trump claimed that he’s given “women more opportunity than, I would say virtually, anybody in the construction industry.” That statement hasn’t been verified, but it’s clear the Trump administration is not prioritizing giving women opportunities in the federal government.